In todayâs contemporary world, technology has a major impact on businesses. This simple fact gets intense as businesses tackle the trick of tapping the right technology and use it towards short and long-term goals. Let us browse 5 ASX-listed stocks and understand their technological stance amid the market dynamics.

Company Profile: MNW provides payment products to merchants, banks and channel partners who desire a customised payment product and aims to make processing payments easy for users. Headquartered in NSW, the company got listed on the ASX in 2007.

FY19 Unaudited Financial Results & Investor Update: On 26 July 2019, MNW released its FY19 updates, stating that the combined impact of TTV growth and revenue margin expansion led to a 59% H-o-H increase in recurring revenues in travel. In the twelve months to 30 June, transaction values were up by 28 per cent on pcp at $799 million, and the recurring revenues were up by 48 per cent on pcp at $2.7 million. The total revenue was $4.9 million, up by 34% on pcp. The company reported a negative EBITDA of $3.7 million, down by 20% on pcp. As on 30 June 2019, the company had $1.4 million in cash and $2 million in debt available, with debt facilities extended through to Sept 2021. 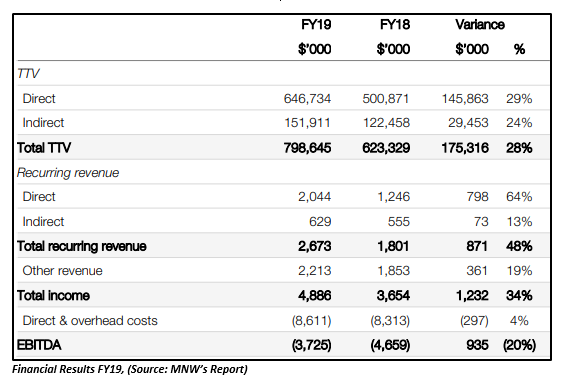 The company notified that it was targeting SME businesses, which make up $11 billion of over $20 billion industry in Australia. Under its near-term outlook, MNW stated that from Q2FY20, all its new customers will be onboarded with a materially higher margin structure, which will be rolled out progressively into the existing customer base. The company notified that its Revenue Margin run-rate is also expected to grow by up to 100% in the near-term.

On the partnership front, MNW has developed and licensed a custom white-label payments platform for the Bank of New Zealand and NETS.

The key metrices from the MNWâs Cash Flow Statement are given in the below table:

Company Profile: A provider of RF Reconnaissance Data-as-a-Service from Space, KSS uses satellites to deliver a global picture of hidden maritime activity. It was founded in 2017 to advance in-Space technologies by experienced Space engineers. The company would launch & operate satellite infrastructure that would generate commercial ISR and geo-services data.

Collaboration with Spire Global: On 6 August 2019, the company pleasingly informed that it will collaborate with Spire Global to amalgamate the Spire AIS data along with the companyâs RF data, with a motive to create a new shared capability to foster safety at sea. Spire is amongst the world's largest space to cloud analytics companies, and the joint efforts of both companies would support and expand tools for Maritime Agencies, Governments and organizations having strategic interest in identifying dark vessels.

MOU with EarthLab: On 5 August 2019, KSS signed a binding MOU with EarthLab Luxembourg S.A. with an intention to identify partnership opportunities for the use of its Geolocation and RF Reconnaissance data for the insurance sector and for other various Geospatial intelligence purposes.

Company Profile: Healthcare player, PCK is a provider of products and services that aid people in pain. PainChekÂ® is the worldâs first ever pain assessment tool that has a regulatory clearance in both Europe and Australia. Using the facial recognition and AI technology, it identifies the presence, quantifies the severity and monitors the effect of treatment to optimise overall care.

Receipt of Singapore regulatory clearance: A feather in PCKâs advancement hat, the company received a key Asian (Singapore) regulatory clearance and the signed a landmark commercial agreement. The HSA or Health Sciences Authority of Singapore has approved the use of the PainChekÂ® app in the market. Besides this, the company signed 2-yr licence agreement with Allium Healthcare Holdings Pte Ltd, which caters to the needs of old age people, and is the operator and developer of Allium Care Suites. The agreement marks for the first entry in Singapore for PainChekÂ®, broadening the companyâs scope in the Asian markets.

Further, PCK notified that it would be partnering with Murdoch Childrenâs Research Institute to diversify its operations to infant care. 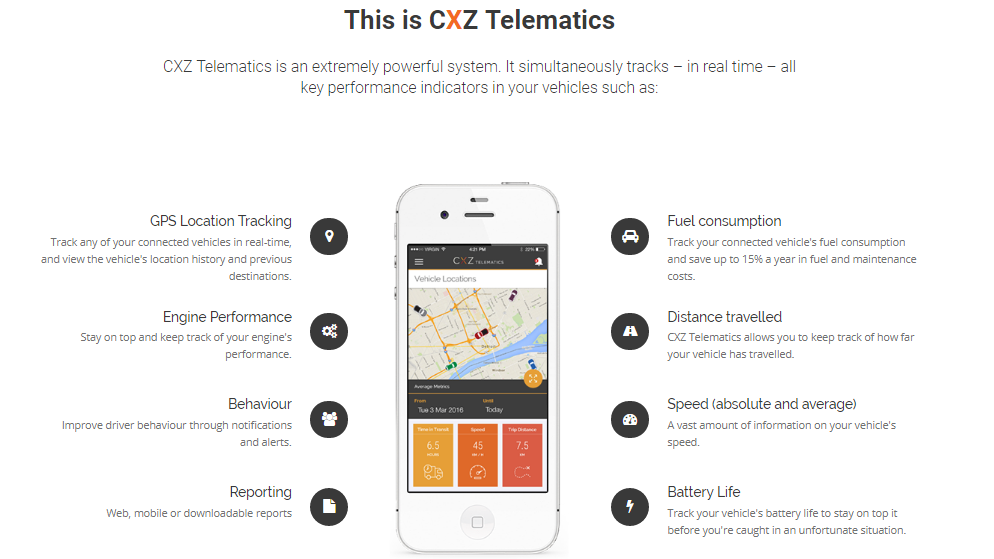 New on Board: The company welcomed Mr Guy Perkins as the new Managing Director in August this year, in a time when CXZ is building an executive team to drive growth in the US fleet telematics business and leaping into global markets. Presently, Mr Guy is a Non-Executive Director of Soar and would take charge of his role and duties on 2 September 2019.

Quarterly Activities Report: Recently, CXZ released its Quarterly Activities Report for the quarter ended 30 June 2019, stating that it had finalised the implementation of the Courtesy Transportation Program and Cadillac Courtesy Transportation Alternative program. The OnTRAC vehicle subscriptions via the GM dealerships reached at 70,462, representing an average vehicle subscription rate of 71,423 per month. The company mentioned that its Commercial Link subscription base has now reached 4,981.

On the financial end, CXZâs cash receipts for the period totalled $1.5 million, and the cash position as at 30 June 2019 was $939k. Key metrices from the CXZâs Cash Flow Statement are stated below:

Company Profile: With a focus on term deposits, CWZ provides an easy and secure platform to invest online, with the aim to help Australians earn better interest on their investments,. The companyâs cash management platform provides options to select investments, invest and switch between banks, and compare rates. The Group consists of RIM Securities Ltd, Cashwerkz Technologies Pty Ltd and Trustees Australia Limited.

Latest Partnership with Judo Bank: On 31 July 2019, the company announced that it had Australiaâs first SME challenger bank in its partner kitty. Judo Bank would join numerous existing Authorised Deposit-Taking Institutions by offering its term deposit products through Cashwerkz and RIM Securities. The focus of the partnership lies on middle markets, which could be leveraged to the companyâs digital forums at a later stage.

The above-mentioned stocks depict a similarity. These are tech-savvy companies which are leveraging their progresses on the basis of the innovative and diverse technologies that helps in their respective growth trajectories. These companies are also well known for the unique technology-based products and services that they offer to the customers. The market is very fascinated to observe that whether the tech-centric strategies will continue to mint good business for these companies.