On 27th May 2019, the company announced the launch window of its Scouting Mission in August 2019 and it would take place on a Rocket Lab Electron launch vehicle. A fourteen-day launch window will be publicly advised approximately twenty days before the scheduled launch date.

The company is ready with its launch Scouting satellites, and it will be taken on site as soon as the Rocket Lab customer area is ready to accept Kleos team for integration activities. Rocket Labâs proprietary Maxwell dispense has been used to check all the four satellites. Maxwell dispenser is used for placement from the Electron kick stage to low Earth orbit. 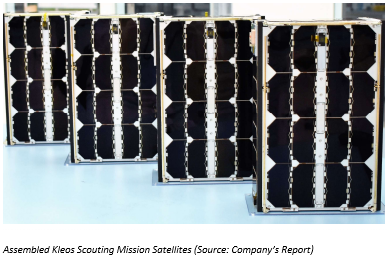 The satellite testing will come to an end with a complete system test using KSAT equipment station immediately prior to flight acceptance review and dispatch to launch site.

In this ridesharing mission with Rocket Lab, the satellites are to be commissioned in an exact five-hundred-kilometre Sun Synchronous Orbit.

The CEO of the company, Andrew Bowyer, stated that the technical team has done exceptionally well and continue to optimise the post-launch phase.

Lars Hoffman, Senior Vice President of Global Launch Services of Rocket Lab, mentioned that the team is excited to provide a top-notch ride to orbit on Electron.

At the highest point, the price touched the level of A$0.30, which took only ten weeks after 12th February 2019. The rally was so strong that till the high of A$0.3 reached, the stock had given a negative return for just 1 out of 10 weeks.

After reaching the top, the stock started to face selling pressure and corrected down to the lowest level of A$0.20. On the weekly chart, the stock has strong support around A$0.20, and below that, the next support level seems to be at A$0.17.

The stock is still trading above the 21-week moving average, which is stating the current trend to be positive, till the time the stock price trades above the moving average.

One fundamental reason for this yearâs rally can be found here.