Financials sector player, A1 Investments & Resources Ltd (ASX: AYI) is an investment firm that focuses on projects in Australia and Asian countries including Korea, China, Taiwan and Japan. AYI primarily targets food industry related investments, while also exploring other sectors such as tourism, property and financials. The Company, founded in June 2004, operates with a vision of maintaining and developing a diversified investments portfolio, globally.

Let us look at the recently finalised project of the Company. But before reading this article, remember these three abbreviations -

Sea Cucumber Business Deal - AYI entered into an agreement with Tidal Moon Pty Limited or TM in September 2019 to collectively develop a new sea cucumber business based in Western Australia. As part of the deal, TM has access to harvest sea cucumbers along 1,200km of Western Australian coastline waters from Shark Bay to Onslow, with its primary operations at Denham.

Also, the two companies agreed to form a new entity that would be responsible for the handling of sea cucumbers from a new factory at Denham on the shores of Shark Bay in Western Australia. The new entity, namely Tidal Moon Australia Pty Limited (TMA) would be owned 51% by TM and 49% by AYI, although AYI will have the rights of veto. 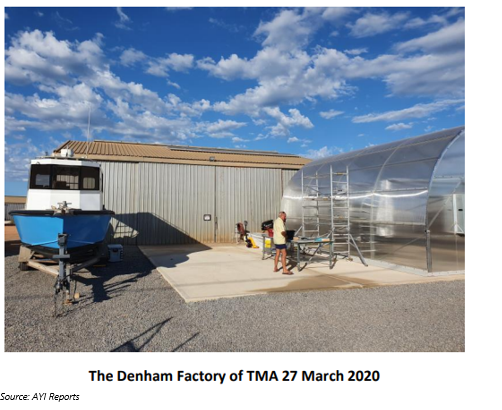 As per the agreement between the three companies:

AYI will control the project cost, with TM and TMA required to provide AYI with an open accounting book and driving their own operating costs down.

TMA and TM continued to finalise the factory in Denham that would handle sea cucumbers and comprise of a new state-of-the art solar-powered drying room. Meanwhile, AYI and TMA worked on all the pre-requisite requirements during the March quarter, targeted towards securing the required export authorities for the product.

The Company was also looking to obtain the best possible logistics solution for the export of the product, given the significant constraints due to COVID-19.

Blue Lagoon Pearls Pty Limited - A1 Investments & Resources has also decided to join hands with TM to acquire the operations and assets of Blue Lagoon. As per the plan, the two companies will have no funding obligations in the proposal. However, at the same time, they have agreed that TMA will lease the pearling processing platform and sub-license the pearling license area for sea cucumber breeding, in case they have success with the TM proposal.

Bundybunna - The Company continues to pursue the resolution of the termination of the liquidation of Bundybunna Aboriginal Corporation Limited (in liquidation). Owing to the coronavirus pandemic, further delay is expected in finalisation.

The new addition is expected to serve as the sales and marketing vehicle for the Company’s products into Asian countries including Japan and China. The primary focus of the Company’s marketing is China and Japan. Blue Ocean Japan is positioned to take advantage of these difficult trading conditions.

Proceeds planned to be directed towards developing the sea cucumber business and used as further working capital. It has also issued further 1 billion shares to its sea cucumber partners and contractors in Western Australia at a notional issue price of $0.0004 per share.

Plans with respect to the new sea cucumber business of AYI seem to progress well. Moreover, the Company intends to position its sea cucumber products as high-end products at high-end market prices.