Let us discuss three large cap healthcare companies operating on ASX along with their recent updates and stock performance.

ResMed Inc. (ASX: RMD) is a company operating in the healthcare sector, engaged in the development, manufacturing and marketing of medical equipment used for the treatment of sleep disordered breathing. ResMed team focuses on developing innovative solutions to help people stay healthier and live better life. The company is the world leader in the management of Sleep Apnea and COPD.

Sleep Apnea is a sleeping disorder in which the affected person repeatedly stops and starts breathing. The disorder is more commonly found in men than in women. Its symptoms are loud snoring and feeling tired even after sleeping the whole night.

In early May 2019, the company announced its Q3 FY2019 results ended 31 March 2019. The company reported an increase in the revenue by 12% to $662.2 million as compared to the previous corresponding period. The gross margin expanded to 59.2 percent. During the reported quarter, the company’s net operating profit also registered an increase of 15%.

Q3 remained strong with top-line revenue growth across all the segmnets of the company. Q3 results were also the outcome of the recent acquisition of SaaS companies followed by progress in the international sales of devices. The company declared a cash dividend of US$0.037 per share, payable on Thursday, 13 June 2019.

According to the company’s CEO Mick Farrell, RMD has a solid product pipeline, which in addition to the launch of the AirFit P30i, would aid the company in further growing its operations in the future. The company is on track to enhance the lives of 250 million people in out-of-hospital healthcare in 2025, stated Mick.

As a healthcare equipment and service provider, Cochlear Limited (ASX: COH) is engaged into offering a range of implantable hearing solutions. Through its segments, the company serves Americas, EMEA and Asia-Pacific markets. For more than three decades, Cochlear Limited has delivered several 'world firsts' in hearing technology. Incorporated in 1983, the company is headquartered in Sydney, Australia.

A cochlear implant is a hearing aid device that helps individuals suffering from moderate to severe hearing loss. COH founded the implant technology and is still the industry leader in this segment.

Nucleus® 7 Sound Processor: This is the company’s smallest and lightest behind-the-ear hearing solution, which helps the user to control his/her hearing and connect with the technology. Moreover, this solution enables individuals to connect directly using their smartphones.

Nucleus® Kanso® Sound Processor: This product is smart, and it does not compromise on hearing performance technology.

Nucleus® CP802 Sound Processor: The product is durable in nature and can be used for everyday hearing. It has a parental control as well at the touch of a button. 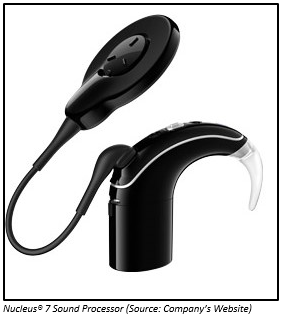 On 17 June 2019, Cochlear publicized that it received approval from the Food and Drug Administration (FDA) for its Nucleus® Profile™ Plus Series cochlear implant. The company will start an immediate launch of the product in the United States.

Services provided by the company:

The company is the largest provider of laboratory medicine and pathology in Australia and Germany as well as Switzerland. The company has also made its presence in the United States, United Kingdom, Belgium, Ireland and New Zealand. The state-of-the-art laboratories of the company have over eight hundred specialist pathologists along with thousands of medical scientists and technicians who provide timely results that are accurate, helping clinicians in optimal patient management.

The company ranks second in Australia as the diagnostic imaging provider and has over 100 radiology centres. The services of the company are being supervised by 200+ specialist radiologists as well as nuclear physicians.

This division is the primary care segment of the company, which brings together a broad range of health services such as general practice clinics and after hours GP services, and occupational health services. 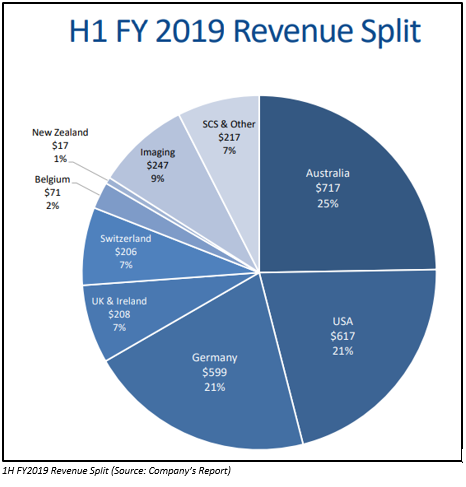 Below are the financial highlights for 1H FY2019.