A look at two Property Stocks – MGR and LLC

The real estate sector has witnessed marginal decline in FY19 due to oversupply across the residential segment. The sector showed lower growth due to increase of ageing population across the country. We will be discussing two property stocks which have delivered stellar returns in the recent past. Let’s have a look on the operating performance and as well as the guidance of these two companies.

Mirvac Group is engaged in real estate leasing and development. It also engages in third-party fund management and property management. Recently, the company informed change in director’s interest wherein one of the company’s directors named Peter Stanley Nash, who possessed 7,831 Rights to acquire Stapled Securities disposed the same at an average price consideration of $3.14 per stapled security.

Outlook: As per the management guidance, MGR is estimating its operating FY20EPS guidance of within 17.6 to 17.8 cents per share. The business is expecting 3-4% growth in earnings for FY20. The Management highlighted that the distribution is likely to be at 12.2 cents per share, representing a 5% growth in dividend per share.

Lendlease Group is engaged in development, leasing, construction and investments of property assets across Australia, Asia, Europe and USA. On 29 October 2019, LLC informed that the company has appointed Baroness Margaret Ford OBE to the management committee for the post of independent non-executive director with effective from 1 March 2020. 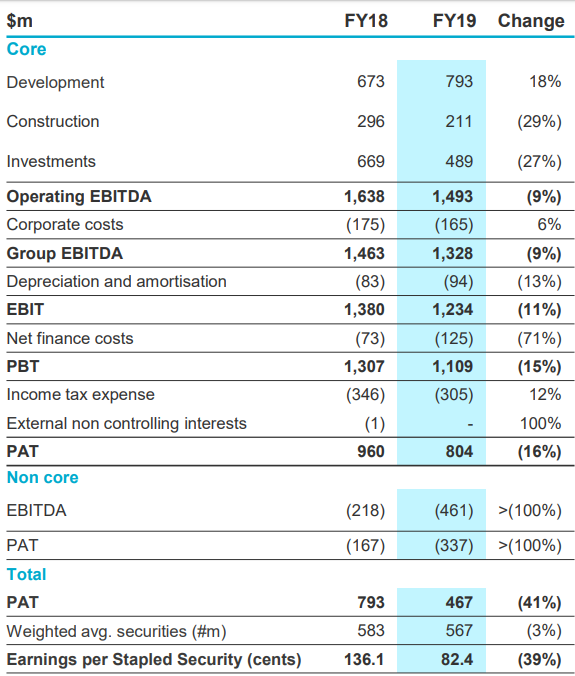 FY19 Financial Highlights for year ending 30 June 2019: LLC reported its FY19 full-year results wherein the company reported Profit after Tax of $467 million, a decline 41% on y-o-y basis. The company reported earnings per stapled security of 82.4 cents, a decline of 39% from FY18. The company’s non-core business reported after tax loss at $337 million against a loss of $167 million during previous financial year. Profit after Tax from its core segment stood at $804 million.

The company has developmental pipeline approaching $100 billion with a strong outlook. Funds Under Management (FUM) of showed a growth of 17% on y-o-y basis to $35.2 billion. LLC’s strategic initiatives includes three major urbanisation projects in Milan, Chicago and Sydney and preferred on two projects in London and Birmingham which was valued at c.$17.2 billion.

Americas: During, FY19, this segment reported $27.7 billion of development pipeline, $6.2 billion of construction backlog, $0.7 billion of funds under management (FUM).

Europe: The company reported development pipeline of $34.1 billion, construction backlog of $1.7 billion and reported funds under management of $1.5 billion. During the year, LLC reported investment amounted to $0.1 billion.

Asia: The business posted development pipelines of $5 billion followed by a construction backlog of $0.8 billion. Funds under management came in at $8.2 billion during the financial year 2019. The segment reported investment at $0.7 billion during the year.

Outlook: As per the management guidance, the business is developing a pipeline of $100 billion in coming years. As per the company’s upcoming strategy, the group will focus on leveraging its competitive advantages through the integrated model along with urbanization and investment platforms.