A Look at Australian Cannabis Landscape: CAN, AGH, IDT and EXL

Cannabis industry in Australia is growing at a fast pace, and government authorities across the country are creating a lot of prospects for investors by legalising medicinal cannabis. Moreover, it is being assumed that the Australia cannabis regulation would become less complex in the near future.

Recently in the month of September 2019, a report recommending several changes to the licensing regime that regulates cannabis related business in the country was tabled in the Australian Parliament. The main suggestion in the report is to bring amendments in the Narcotic Drugs Act (NDA) for establishing a single licensing scheme for manufacturing medicinal cannabis.

As of June 2019, the Office of Drug Control (ODC) received ~246 applications for securing the licence, out of which only 63 were granted the licence, which is a higher number than the expectations.

Three types of licences for medicinal cannabis product supply available in the country are.

Let us discuss four stocks operating in the cannabis segment.

Recently, on 4 October 2019, the company unveiled to have issued 67,538 fully paid ordinary shares by way of a placement to a sophisticated investor - Commonwealth Scientific and Industrial Research Organisation (CSIRO) and the shares were issued as settlement of an invoice for services rendered without disclosure to the investor under Part 6D.2 of the Corporations Act.

The company at the end of August 2019 declared results for the 12-month period ended 30 June 2019. Some of the highlights from the announcement are:

Althea Group Holdings Limited, headquartered in Melbourne, is engaged in the exports, supply and production of medicinal cannabis. The group has various licenses as well as permits for the cultivation and import of pharmaceutical grade cannabis. AGH was officially listed on the Australian stock exchange in September 2018.

On 14 October 2019, the company released results of annual general meeting.

On 4 October 2019, the company announced that its medicinal cannabis products are being prescribed to 2,329 patients in Australia.

On 25 September 2019, the company reported a change in the substantial holding of PAC Partner Securities Pty Ltd to a voting power of 6.0 per cent from an earlier voting power of 10.5 per cent.

On 14 October 2019, the company announced that cannabidiol (CBD) active pharmaceutical ingredient (API) development agreement with the State Government of Victoria is set to conclude in early 2020. Under the contract, the company retained the know?how and intellectual property that it had developed with respect to the production of pharmaceutical grade (GMP) cannabidiol.

The company is now looking ahead to the activities required for commercialising cannabidiol products for domestic and global markets.

On 26 September 2019, the company announced that Elixinol BV, the wholly owned subsidiary of EXL based in the Netherlands, signed an exclusive distribution agreement with Harmonia Life Oy for multiple channels in Finland. Under the agreement, Harmonia Life Oy will sell EXL labelled products through various retail networks for a time span of five years. The exclusivity of the distribution agreement is dependent on attainment of minimum sales targets (annual). 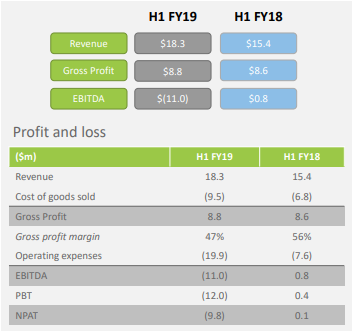