Three principal activities of the company include:

At 2019 annual general meeting, the company’s Chairman Donald McGauchie AO told that the year 2019 has been another significant year for the company, a year of progress and great challenges. The company’s ability to produce the highest quality branded beef at scale sets it apart from its competitors. While others can produce quality and some can produce scale, but no one is as well positioned as AACo to do both, said Chairman at the AGM.

During FY19, the company was committed on progressing its premium branded beef strategy, which has been unaffected by extreme seasonal impacts. For FY19, the company reported a statutory EBITDA loss of $182.7 million, majorly driven by the market value movements in the value of the closing herd of $89.0 million, Gulf flood write-offs and emergency expenses of $46.6 million. The company reported operating loss of $22.9 million in FY19, which is higher than the loss of $13.5 million incurred in last year. 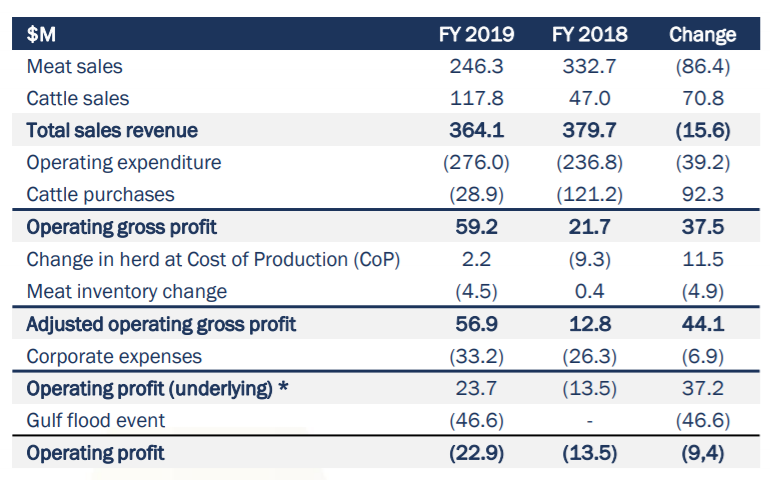 A look at Gulf Flooding Event: In the month of February 2019, a huge flood swept through the Gulf of Carpentaria Region, extending around 400km from the Gulf to Julia Creek, and reached around 70km wide in many areas. The flood impacted various company’s stations in the gulf region. Canobie, Carrum, Wondoola and Dalgonally, all witnessed infrastructure and livestock losses due to the flood.

Key Decisions Made: During FY19, the company made some important decisions which have simplified the business and created a more efficient AACo. During the year, the operations at the Livingstone Beef processing facility were suspended and along with that, the 1824 program was also discontinued. As a consequence of the Livingstone and 1824 decisions, a lower reliance on non-wagyu herd numbers has led to a decline in the non-wagyu headcount. Further, the drought conditions during the year resulted in an increase in sales of these non-wagyu animals and the 43,000 cattle lost in the Gulf flood were almost exclusively non-wagyu cattle.

For the full year, the company reported a total sales revenue of $364.1 million, compared with $379.7 million in FY18, with lower volumes due to the Livingstone and 1824 decisions. Wagyu meat sales revenue was up 4.5 per-cent compared to the last year.

As indicators of impairment existed, the company tested the CGU for impairment and calculated the recoverable amount of the CGU which came out to be around $40.2 million, lower than the carrying value by $69.5 million. It is to be noted that, the carrying value prior to this assessment was $109.7 million, representing $104.8 million of property, plant and equipment and $4.9 million of working capital.

As a result of this, the company incurred an impairment loss of $69.5 million with respect to buildings, improvements, plant and equipment, and reduced the carrying values of these assets in the CGU by the same amount i.e., $69.5 million.

During the first half of FY19, the operations were suspended at Livingstone Beef. On 30 September 2018, management recalculated the recoverable amount of the CGU based on the updated conditions, using Level 3 fair value inputs as per AASB 13 Fair Value Measurement, it was found that the recoverable amount was materially consistent with the current carrying value of the CGU, and as such no adjustment was made to the carrying value of Livingstone Beef on 30 September 2018.

On 31 March 2019, consideration was given to internal and external factors impacting the CGU, noting no indications of a material change to the carrying value of Livingstone Beef at the year-end.

The company’s Board and management are reviewing various strategic options for Livingstone Beef.

What now? During FY19 company demonstrated improved underlying operating profit during the year despite facing seasonal and external challenges. The company is now focussed on improving the quantity and quality of its earnings by expanding the company’s exposure to premium branded beef prices, and through its medium-term strategy, the company is putting a special emphasis on optimising its supply chains, implementing a differentiated branding strategy and investing in innovation and technology.

Recent Board Changes: Recently on 2nd August 2019, the company announced the appointment of Mr. Marc Blazer as a non-executive Director. Mr. Blazer has a lot of experience in the food and hospitality sector and has a great understanding of how to build brands around people and products. On the education front, he has a graduate degree from the London School of Economics. He has also done BA from the University of Maryland in the year 1990.

Recently on 31 July 2019, the company announced that it has entered into a 10-year lease of Rewan Station, adding to the company’s already significant property portfolio, demonstrating AACo’s commitment to its branded food strategy.

A quick look at few other Agricultural Stocks:

Leading agribusiness, Elders Limited (ASX: ELD) recently entered into a scheme implementation deed (SID) with AIRR Holdings Limited (AIRR) to acquire all of the AIRR’s shares. The company believes that this acquisition is aligned with Elders’ Corporate Acquisition Principles. Various key strategic advantages of the acquisition for the company are as follows:

In order to fund the acquisition, the company recently completed a Retail Entitlement Offer, representing the final stage of Elders' approximately A$137 million equity raising.

Supplier of quality livestock, Wellard Limited (ASX: WLD) recently accepted a proposal to sell the M/V Ocean Swagman for US$25.2 million to Trim Shipping SA, Panama. In the first half of FY19, the company reported revenue from continuing operations of $188.19 million which was 33.9% higher than pcp. 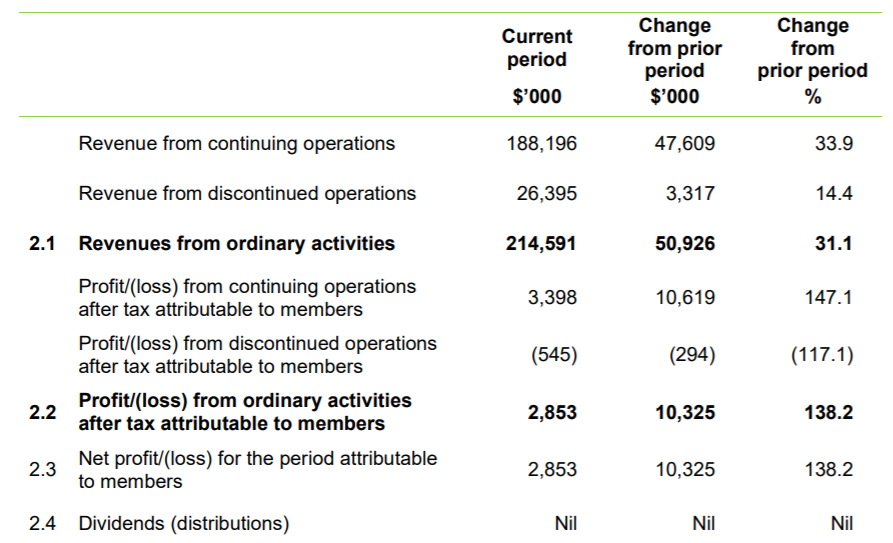 CLICK HERE FOR YOUR FREE REPORT!
Tags:
ASX: AAC ASX: ELD ASX: WLD
All pictures are copyright to their respective owner(s).Kalkinemedia.com does not claim ownership of any of the pictures displayed on this website unless stated otherwise. Some of the images used on this website are taken from the web and are believed to be in public domain. We have used reasonable efforts to accredit the source (public domain/CC0 status) to where it was found and indicated it below the image.