When it comes to the automotive sector, electric vehicles grab the headlines on most occasions because of its benefits for the environment and the government support to bring them in the markets. The increased focus on EVs has also played a part in the growing momentum of the battery metals story. As the COVID-19 pandemic continues to grip the world, its outcomes are being felt far and wide. Petrol and diesel car sales are plummeting in Australia, as the pandemic deteriorates an already struggling market, deepening a ~24-month slump that is now forcing several car dealers to either close some of their operations or shut down completely.

In this article, we will be looking at how the car dealership sector is performing in the current scenario wherein the COVID-19 pandemic has severely impacted the economy.

With a country so expansive, it makes sense that an individual’s car is among the most valued possessions. Most leading car companies say they are still on track to introduce a range of new models this year, despite apparent setbacks due to the global outbreak of the COVID-19 pandemic. The automotive manufacturing industry is continuing to feel the effects of the COVID-19 crisis, with several global car-makers declaring temporary factory shut down.

As per a market study, In Australia, people bought approximately 700 fewer brand new cars per day in March 2020 as compared to March 2019. The fall in sales led to the shedding of around $30 million a day from an economy wrecked by the coronavirus pandemic. There are approximately 1.5k new car dealers in Australia, operating more than 3,000 new vehicle stores.

According to the Australian Automotive Dealer Association (AADA), the new vehicle trading segment have over 55k employees including 4,463 trainees, contributes more than 14 million in community donations at the national level and has an overall turnover of approximately $56 billion generating over $2 billion in tax revenue.

ALSO READ: Is There Any Value in Australian Automotive Aftermarket?

The unprecedented COVID-19 disaster has seen the Australian government, at all levels, build a variety of support measures for both businesses as well as for individuals. These measures are evolving as the scope of the disaster, and its impact become noticeable. Hence, programs are being characterised and enacted on an ongoing basis.

Presently, most programs have a timeframe of six months, but this would be reviewed according to the circumstances at the time.

New car sales figures released for March are the worst monthly results in more than a decade, and only serve as an indicator of the hardship dealers will face in the coming months. AADA CEO, James Voortman, stated that in March, many dealers were fulfilling orders placed in the previous month or earlier, meaning the figures do not reveal the full extent of the impact of the COVID-19.

Moreover, AADA also mentioned that the automotive industry is already in recession and needs urgent stimulus. Peak bodies in the automotive sector have called on the government to deliver much-needed stimulus for the weakened industry, now also feeling the associated effects of the COVID-19.

The decline in the industry has already forced many of the nation’s 3.2k new car dealerships to lay off staff and some dealerships, particularly in regional Australia, have been forced to close their doors.

The industry bodies have urged the government to move fast to stimulate the sale of new cars which, aside from the evident economic benefits, bring societal benefits as they are safer, cleaner, and more efficient than the older cars they replace. 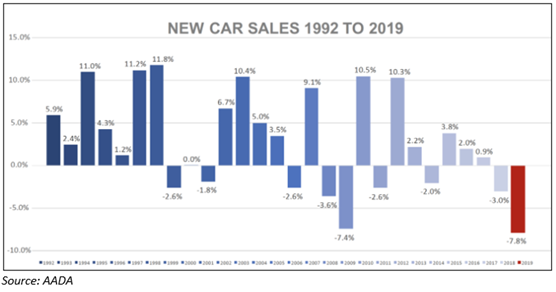 Vehicle Sales in Australia Amid Turmoil

The monetary impact of the drop in car sales is approximately $30 million per day. The automotive industry has been hammered by a sharp decline in new vehicle sales in 2020, and the worst is yet to come.

Data released by the FCAI showed that approximately 17k motorcycles, scooters and ATVs were sold throughout the first quarter of 2020, as compared to ~18,44k in the first three months 2019. This signifies a 2.5 per cent drop in the market. The initial three-months of 2020 have witnessed many challenges unfolding in the Australian market, initially by bushfires, and more recently the COVID-19 pandemic. The effects of the virus have already and will continue to, hit vehicle supplies, product launch programs and consumer and business confidence.

FCAI also revealed that across the industry segments, scooters suffered the highest drop, with a 14.1 per cent decline in sales for the first quarter. In this segment, Honda held a 33.1 per cent share, followed by Suzuki with 21.9 per cent and Vespa with 17 per cent.

In March 2020, FCAI stated that sales for the month totalled 81,690, consisting of around 21k passenger automobiles for a 26.7 per cent share of the market, 39,171 sport utility vehicle (SUVs) and 18,162 light commercial vehicles (LCV). These data exemplify a negative growth of nearly 17.9 per cent as compared to the previous corresponding period. They are primarily attributed to the impact of the COVID-19 turmoil on the general economy.

In March 2020, the best-selling vehicle was the Toyota Hi-Lux with 3,556 sales, followed by the Ford Ranger with approximately 3k sales, Toyota RAV 4 with 2,991 sales, Toyota Corolla with ~2.8k sales and the Holden Colorado with 2,391 sales.

According to the forecast by some industry experts, this is the highest drop in new-car sales since the 2009 GFC in the US, as the dealers in Australia report the harshest conditions in memory. However, it is expected that the industry will pick up in the coming months with the economy getting back to normal operations post COVID-19 recovery. Despite the decline in new-car sales in Australia, the outlets are still open, and the number of deals is likely to go north in the future.