The Australian tech sector in the month of February 2019 witnessed investments from three global players including Equinix, Cisco and Zoho towards their expansion in the country.

As per a report published by the Australian government, four emerging technologies - artificial intelligence, blockchain, IoT and quantum computing would be playing an important role in boosting the tech sector. Artificial intelligence has a huge potential for pumping trillions of dollars on a global level in the upcoming years. On this front, the Australian government has also introduced 8 AI Ethics principles and received support from big players like Telstra, Commonwealth Bank, NAB, Flamingo and Microsoft.

2020 is the beginning of a new decade and is expected to bring a significant improvement in the tech sector.

In this article, we would be looking at some of the popular tech stocks of 2019 with their outlook and progress towards achieving goals for the year.

Electronic design software company, Altium Limited (ASX: ALU), in FY2019 ended 30 June 2019, delivered a strong result with record growth of 27% in new Altium Designer seats and 13% in subscription base to over 43,600 subscribers.

The company highlighted in its outlook that it is focused to become a market leader in PCB design software and aims to achieve market dominance by 2025 with a subscriber base of 100,000.

Appen Limited (ASX: APX), which is a global leader in the development of high-quality, human-annotated datasets for machine learning and AI, reported a 60% growth in revenue for 1H 2019 ended 30 June 2019. Its underlying EBITDA increased by 81% to $46.3 million while statutory EBITDA went up by 48%. Underlying net profit after tax (NPAT) went up by 67 per cent to $29.6 million and statutory NPAT grew by 33 per cent to $18.6 million.

In FY2020, the company expects its public cloud business to continue to be the growth engine for the business, with sales & revenue to grow continuously as more businesses in the Asia-Pacific region move their IT jobs to public cloud infrastructure.

On this front, the company, in FY2020, expects to invest in:

During FY2020, rhipe Limited anticipates investing ~ $3 million in rhipe Japan. The investment would be directed towards hiring personnel and delivering marketing, systems & enablement services for driving the adoption of Microsoft Cloud Subscriptions amongst small and medium-sized businesses in Japan.

Importance of investing in Japan:

Audinate Group Limited (ASX: AD8), a developer of the professional AV-industry leading Dante® media networking solution, reported a 44% growth in revenue to $28.3 million in FY2019 ended 30 June 2019. Operating cash flows increased from $1 million to $3.6 million and EBITDA went up from $0.6 million to $2.8 million.

TechnologyOne Limited (ASX:TNE), one of Australia’s largest enterprise SaaS companies, reported a growth of 44% in SaaS Annual Recurring Revenue during FY2019 ended 30 September 2019. Revenue increased by 13% to $286 million, expenses declined by 9%, and cash flow generation for the period was $45 million, representing a drop of 14% as compared to the previous corresponding period. The company was able to achieve its top year-end guidance of NPBT of $76.3 million. 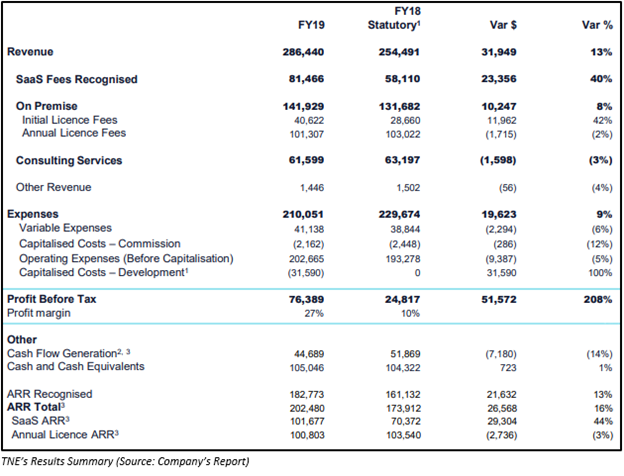 The company confirmed in its FY2019 results, that it is positioned strongly for FY2020 and would continue to deliver strong profit growth once again over the full year.

AVJennings, which is one of the best known and most trusted names in residential property in Australia, entered an agreement for a period of 5 years with TechnologyOne to build out its digital transformation. Under the agreement, TNE would provide a simpler, unified & advanced technology base for the organisation along with its extremely mobile, geographically diverse workforce spread across New South Wales, Queensland, Victoria and New Zealand.

Xero Limited (ASX: XRO), a provider of online accounting software for small businesses, registered a 32% increase in operating revenue in 1H FY2020 ended 30 September 2019. Subscriber base increased by 30% to nearly 2.06 million, with new subscriber base of 239,000, representing a growth of 24%. NPAT recorded for the period stood at $1.34 million.

In the upcoming period, the company would be focusing on boosting its global small business platform. It would prefer to reinvest the cash generated, depending on investment criteria & market scenario. The free cash flow in FY2020 ending 31 March 2020 is anticipated to be in a same proportion of the FY2019 total operating revenue.

Let’s look at some of the company’s achievements in 2H FY2020:

Nearmap Ltd (ASX: NEA), a provider of geospatial map technology for business, enterprises & government clients, reported a 45% growth in statutory revenue to $77.64 million during FY2019 ended 30 June 2019. The net loss for the period was $14.93 million, representing a growth of 35% from the previous corresponding period. The balance sheet of the company remained strong for the period with zero debt.

Nearmap is well-positioned to extend its growth and deliver on its priorities in FY2020. Nearmap 3D and a beta release of NEA’s AI content would support the evolution of the company. Further, the company would increase investment in people and technology to offer superior content to clients.

On 12 December 2019, the company announced the acquisition of technology and intellectual property from Primitive LLC to rapidly extract and disseminate roof geometry from its widescale 3D content as well as provide a new sort of location intelligence to clients. Primitive LLC is a deep learning and analytics technology company engaged in data extraction for providing roof geometry insights.