The ASX is intending to unveil a new technology index in early 2020 - S&P/ASX All Technology Index (XTX). Projected to go live on 21 February 2020, the new index will provide a better transparency and precision to investors pursuing ASX technology stocks.

The new S&P/ASX All Technology Index, including all ASX technology stocks, is intended to be a wider and more comprehensive index as compared to the XIJ - existing S&P/ASX 200 Information Technology Index, comprising top 200 IT stocks.

This signifies the strong foothold of ASX technology stocks. Further specification will be revealed about the Index methodology on the launch of the index.

The index launch is driven by ASX strategy to attract more young tech companies to list in Australia and to position itself as a “late-stage VC funding market”.

The Nasdaq composite index comprises all companies listed on the Nasdaq Stock Market and tracks greater than 3,300 stocks in all. It presently traces the execution and performance of the world’s top tech stocks, which includes tech behemoth like Apple, Microsoft, Amazon.com, Facebook and Netflix.

ASX executive general manager, Max Cunningham stated that the new index is likely to boost the profile of tech companies, currently shrouded in the spectres of the $30 billion ‘WAAAX’ stocks.

The main aim for the launch is to develop an index with a decent, high-quality, increasing tech sector, which open-heartedly welcomes mid-cap and upwards to the latest tech index.

The S&P/ASX 200 Information Technology index has been one of the best-performing indices last year, with more than 30% return on a year-to-date basis.

The technology industry is expected to continue 2020 on an promising note. We note that cloud computing boom, driven by growing use of AI and ML technologies, is the key optimistic factor.

Markedly, an advancing economy and improved job chances are aiding the technology sector, which usually plays well in a developing economic cycle.

Semiconductors have always been the key drivers of the entire technology expansion due to their necessity in everyday life from phone, cars, other electronic devices to planes and weapons. Chipmakers, on the other hand, also aids the global technology with their innovative usage and helps in digitalisation in numerous places like transport, financial systems healthcare, retails agriculture, defence, agriculture, to name few.

Global semiconductor and chip market segments are likely to improve, this year. According to media sources, global chip market will increase ~6% in 2020, after an approximate drop of 13% in 2019.

Continuous enhancement in electronic devices and robust adoption of smart-connectivity solutions and wearables are expected to drive the technology sector in the days ahead.

Given the above scenario, we have highlighted three stocks to be a part of the to-be launched tech index in early 2020.

Appen Limited is a global IT player, which is involved in offering quality data solution, human annotated datasets that are utilized for machine learning and AI. The company excels in >180 languages and has greater than 1 million skilled contractors.

In its financial performance for the half year ended 30th June 2019, the company reported revenues of $245.1 million, up 60% year over year. Relevance revenue during the period stood at$193.7 million, soaring 48% on a yearly basis. The company’s underlying EBITDA came in at $46.3 million, an increase of 81% year over year. Further, underlying EBITDA margins increased from 16.8% to 18.9%. The company declared a partially franked dividend of 4 cents per share.

The company had revised its FY19 guidance. It now expects its underlying EBITDA to be in the band of $96M to $99M in FY19, as compared to the previous guidance of $85 million – $90 million. The company expects its ARR outlook in the range of $30M - $35M, unchanged from the previous outlook.

A technology-based company, NextDC Limited is engaged in building and operating independent data centres in Australia. 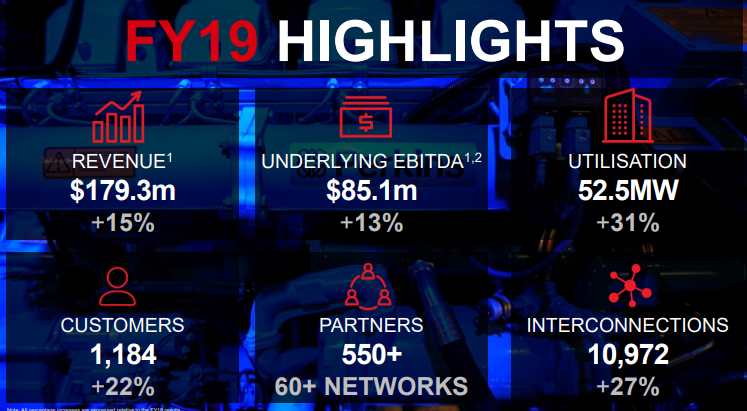 Altium Limited is one of the early providers of PCB design tools and components coupled with data management software solutions. The company’s leading product is best acknowledged for skills in 3D Printed Circuit Board (PCB) Computer. The company has also helped many enterprises in designing next-generation electronic products and systems.