Before we comment on the technology sector future, let’s take a look at the journey of the segmentin 2019.

Equinix - the US data centre giant spent $225 million in new Sydney facility to meet the improved demand for computing capacity.

Another fast-growing Indian software company, Zoho spent around $40 million to establish itself in Australia and bring jobs in the region.

Digital technology, during 2019, continuously provided Australian businesses, governments, individuals as well as communities the impetus to grow and innovate. As the emerging technology combines with the operations and day to day lives of Aussies, new ways will emerge that would help in the increasing productivity and also enhance the living standard.

During 2019, the pipeline of technology employees improved progressively. The admission in IT degrees by domestic university students went up by more than 50% since the low of the late 2000s. There has been an increase in the female representation in the technology staff as well.

The report also stated that there have been initiatives towards developing Australia’s technology workforce. These include improving the flexibility of learning programs to educate workers in digital skills like mastery-based learning & better recognition of smaller flexible curriculums as formal credentials. The investment was also made for developing the foundation literacy, numeracy and digital skills of the workers that are required for technology-related reskilling.

In 2019, there were greater private and public investment in the enhancement of core smart city infrastructure such as reasonable, low-bandwidth wireless networks and sensors in the cities. There were also more technical support & funding for smart city initiatives at the local level. Standard roadmaps were developed to lessen the load of compliance and enhance the interoperability of smart city technologies.

Initiatives were taken to attract more digital investment in Australia. 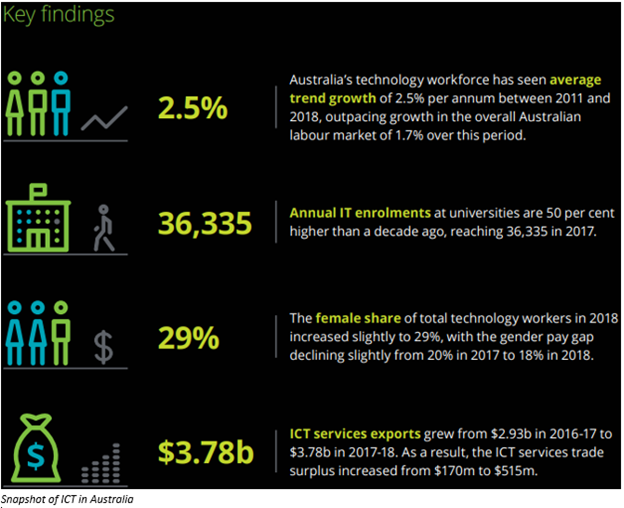 Melbourne is known as the technology hub of Australia and is the home to more than half of the top 20 technology companies in Australia.

As compared to other Australian cities, Melbourne produces more ICT graduates. The city has the nation’s biggest pipeline of new ICT talent which is led by best universities & advanced technical colleges.

The region is known as the electronic games centre of Australia producing several popular games, learning apps, advertising campaigns, online retail solutions. It is the only global city beyond the United States to organise the world-renowned ultimate gaming expo.

Victoria's ICT (Information and Communications Technology) industry comprises of more than 8k organisations which include international firms like IBM, Intel & Microsoft as well.

The Victorian state government also supports the ICT sector. The region has among the smallest rate of business tax of any Australian state & it gives investors with some of the most generous R&D assistance in a cost-competitive business atmosphere.

As per the report released by the Australian government, Australia would be able to maximise the opportunities of technological change by concentrating on four areas which are people, services, digital assets and maintaining the cyber security followed by reviewing the regulatory systems.

In the upcoming years, emerging technologies such as artificial intelligence, blockchain, IoT and quantum computing is projected to evolve & improve many basic tasks as well as interactions.

Artificial Intelligence (AI) is an emerging technology in Australia that is capable of automating the repetitive or any dangerous task. It helps in increasing productivity and will enable the development of innovative customer products. On a global scale, AI is expected to add trillions of dollars in the coming decades. On this front, the Australian government had introduced 8 AI Ethics Principles which was supported by some of the Australian players like Telstra, NAB, Commonwealth Bank, Microsoft & Flamingo AI.

Blockchain is a digital platform which records, verifies & stores transactions that are being shared throughout a network of computers as per a certain set of rules. Using the cryptography method, the transaction is made secured. This eliminates the need of verification made by the central authority.

Internet of things (IoT) refers to the growing applications of sensors that are used for recording things like sounds, touch, movement, temperature & chemical composition that is being used to gather data related to people, object and environment and transmit the data via the internet. The increasing use of this technology has made it possible to obtain sensors at a cheaper rate.

It may also be of interest to know that Australia is known as a world leader in silicon-based quantum computing research. It is one of the most encouraging ways of developing a commercially feasible quantum computer. As a part of the National Innovation and Science Agenda, the government in partnership with leading academic institutions and businesses has invested $25 million in Silicon Quantum Computing Pty Ltd venture.