The remarks from the authorities confirm pausing of the first dose programme. There have been reports that vaccination centres would have to temporarily close it next month onwards due to import delays. Vaccine deployment minister Nadhim Zahawi had tweeted that the UK government was committed to its plans to vaccinate the entire adult population by the end of July.

Moderna has been approved for use in the UK and would be the third vaccine that would be rolled out in the country after Pfizer and Oxford-AstraZeneca. The authorities had reported a shortage in vaccine supplies as a consignment of 5 million AstraZeneca vaccines was held up in India. Another 1.7 million does also need to be retested.

Authorities are, however, still doubtful about resuming international non-essential travel. Dowden said that every legal restriction might not end in June as it was hoped before after an adviser to the government expressed concerns about full relaxation plans.

Also read: EU To Ask the US to Export AstraZeneca/Oxford Vaccine: Report 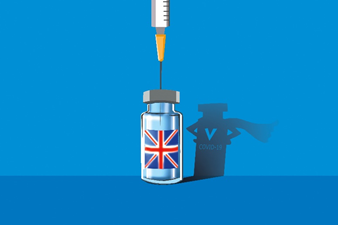 The UK government has not yet confirmed how many doses of the vaccine would be delivered next month. However, media reports said that the initial supply would probably be 500,000. The probable recipients would be those in the age group between 40 and 49. Those above 50 years of age or have clinical complications or working in the NHS would receive either Pfizer or AstraZeneca vaccine.

Though authorities have been insisting on completing vaccination drive by July end, but supplies to the UK have been affected not only by issues in India, but also over a row with the European Union over exports. The bloc recently threatened to halt export of vaccines to the UK to secure doses for its own citizens. The EU had said that it had exported 10 million doses to the UK in six weeks but it did not receive doses from the UK.

Dowden said that he could guarantee that everyone would get their second dose of the vaccine within 12 weeks of the first. He said that the UK did not currently have a surplus of vaccines on being asked in an interview about UK’s plans to give Ireland 3.7 million jabs.

Pfizer would be supplying another 40 million doses. Pfizer is the only vaccine which was used in the early stages of the vaccination drive.