Fully vaccinated travellers arriving from the United States or from the European Union will not be required to self-isolate after coming to the UK starting from next week, said the UK government.

The rule change comes into effect from 4 PM GMT+1 on 2 August. Prior to this change in quarantine rules, travellers arriving from amber listed countries were required to self-isolate for 10 days.

Under the new rules, while no quarantine is necessary, travellers will still be required to take a PCR test for detecting covid-19 before arrival and another test on Day 2 of arrival into the UK.

The resumption of flights between New York and London will help rejuvenate one of the most important travel and business corridors as restrictions ease out. 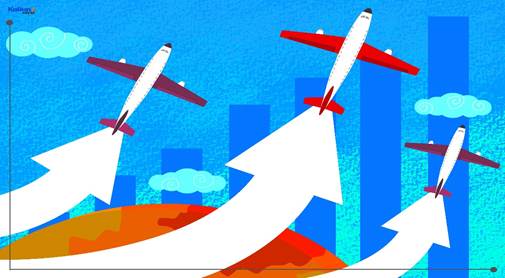 Wizz Air announced its Q1 2022 results, reporting revenues jump of 119.2 per cent to EUR 199.0 million, from 90.8 million in Q1 2021, as demand slowly recovered following an easing of travel restrictions.

The company expects to operate at 100 per cent of its pre-pandemic capacity levels last seen in 2019, by July and August.

Low cost airline Ryanair announced its Q1 2022 results recently, reporting a loss of EUR273 million, compared to a loss of EUR 185 million in Q4 2021. The Q1 loss was due to travel in the Easter holiday period being cancelled.

However, the company stated that vaccination drives, and digital covid-19 certificates issued by the EU helped drive booking recovery ahead of the summer holidays this year.