Global Data Plc (LON: DATA) is a holding company which provides standard gold data to some of the world’s largest industries. The company supports the client in a complex issue, which is delivered through a single integrated online platform. It employs a global expert group of 3,500 employees in 25 countries to convert the raw data into intelligence information for the company. The company covers various industries such as Aerospace, Defence & Security, Automotive, Banking & payments, Construction, Consumer, food services, Insurance, Medical Devices, Mining, Oil & Gas, Packaging, Pharmaceutical, Power, Retail, Technology and travel & tourism. Four core strategic priorities of the company are; World Class Products, Sales Excellence, Operational Agility and Client Centric. The company has a team of around 50 trusted journalists, which focus on publishing many sector-specific stories on daily basis to keep client and investors up to date.

On 3rd October 2019, the company announced about Sally Johnson who was appointed as Chief Financial Officer. She will join the company in the first quarter of the year 2020. Sally is the Deputy Chief Financial Officer of Pearson Plc, since 2015. She has been working at Pearson since 2000 with various operational and finance role and has experience in international finance, change management and leadership. Before Pearson, she has worked in one of the big four company i.e. PricewaterhouseCoopers' in the Assurance practice.

On 23rd May 2019, the company hosted a Capital Markets Day for institutional investors which include presentations from several executives from the Company and focus on company products, the market opportunity and sales execution.

On 26th April 2019, the company announced that Mike Danson (CEO) and Wayne Lloyd (Managing Director) sold 3.34 million ordinary shares in the company for a price of 600 pence per share. 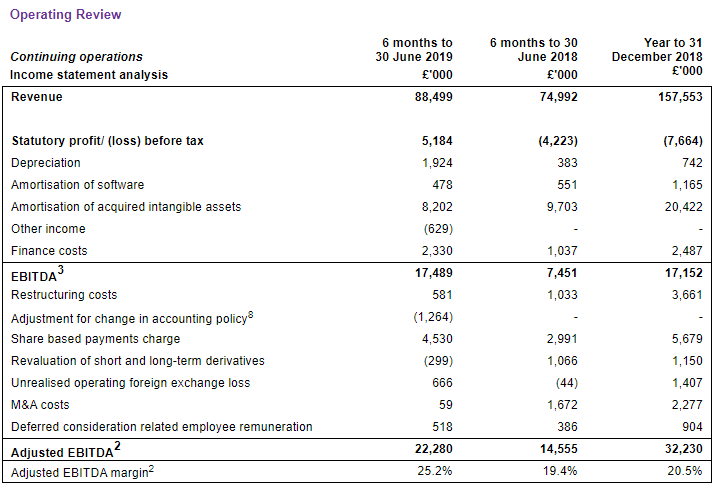 On 6th December 2019, while writing at 09:10 AM GMT, DATA shares were clocking a current market price of GBX 1,155.00 per share on the London Stock Exchange; higher by 0.43% as compared to the last traded price of the previous day. The company’s market capitalisation was at £1.36 Billion at the time of writing.

In the previous year, the company had agreed to acquire the entire share capital of Research Views Limited, which proved beneficial for the company this year. The company began FY 2019, with a positive result, and expects that it will progress further. The company is looking forward in the second half of the year 2019 and hopes to leverage the Global Data platform further. The continued product investment boosted user interface and integration tools within a multi-industry platform which helped the clients with a more productive experience with greater insight.

Renew Holding Plc (LON: RNWH) is a holding company which allows independence to the operating subsidiaries for enabling them more competitive and effective in their respective markets. The company’s engineering services are delivered through the UK subsidiary businesses, which support the everyday running infrastructure networks. The company renew permits to its operating branded subsidiaries which enable it to be competitive and effective in their markets. The expert knowledge of subsidiary businesses delivers engineering services as per the clients need, and many are responsible for the long-term maintenance and renewal of national infrastructure networks. The company’s main AIM is to focus on a direct delivery model through strategically located brands and to support customers in the entire UK.

On 9th May 2019, the company announced to acquire QTS Group Limited’s (a leading independent rail contractor, located at Scotland) 100% of the issued share capital for a cash consideration of £80 million. The company also announced to raise £45 million to part-fund the Acquisition.

On 6th December 2019, at 12:28 PM GMT, while writing, RNWH share price was reported to be at GBX 431.00 per share on the London Stock Exchange, a decline of 2.27 per cent or GBX 10.00 per share, as compared to the previous day’s closing price. The company’s market capitalisation (M-Cap) was reportedly valued to be at GBP 332.20 million with respect to the share’s current market price.