US Market News: The major indices of Wall Street traded in a red zone after Federal Reserve official James Bullard raised concerns regarding inflation figures. Among the gaining stocks, Smith & Wesson (SWBI) shares surged by about 17.62% after the Company had reported better-than-expected top-line business and bottom-line business for the latest quarter. Adobe (ADBE) shares rose by about 2.15% after the quarterly profit came out to be more than the consensus estimates. Fox Corp (FOXA) shares grew by about 1.26% after the Company had raised the stock repurchase program by USD 2 billion to a total of USD 4 billion. Among the declining stocks, Orphazyme (OSPH) shares plunged by around 46.22% after US FDA had rejected the experiment treatment for a genetic disorder.

UK Market News: The London markets traded in a red zone after the release of UK retail sales data. Moreover, the Office for National Statistics had reported a monthly drop of 1.4% in UK retail sales during May 2021 when compared with the prior month. It had shown a monthly gain of 9.2% during April 2021.

Global Market Round Up || Why Did US Markets End Week In Red, Dow Jones Down 500 Points?

FTSE 100 listed Tesco shares dropped by about 4.07% even after the Company had reported a marginal growth in like-for-like sales for the first quarter, benefitted by the relaxation of the Covid-19 restrictions.

Car Dealer Inchcape had stated that the full-year pre-tax profit would remain significantly ahead of the consensus estimates boosted by the better-than-expected performance during H1 FY21. Moreover, the shares climbed by approximately 3.08%.

Rotork shares grew by around 0.18% after the Company was upgraded by Morgan Stanley to “overweight”.

Fresnillo shares went up by around 2.26% and remained the top performer on the FTSE 100 after a surge in the gold price. 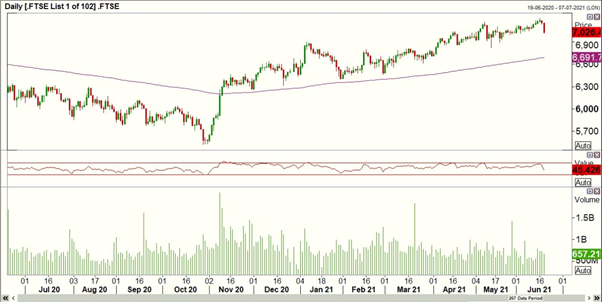