Given the above market conditions, we would review two industrials stocks - Weir Group PLC (LON: WEIR) & Rotork PLC (LON: ROR). As on 20 July 2020 (before the market close at 12.34 PM GMT+1), WEIR was up by 1.94 percent, while ROR was up by 0.93 percent, against the last day closing. Let's skim through their financial and operational updates to understand the Companies better.

Weir Group PLC is a UK based engineering services group that caters to Mining, Infrastructure and Oil & Gas sectors. The Group designs and produces engineered solutions in over 50 countries. It provides mill circuit technology and slurry handling equipment that have extensive application in the Mining sector. The Group is included in the FTSE-250 index.

In Q1 FY20, the orders were down by 13 percent year on year due to the subdued oil & gas market; the original equipment orders fell by 22 percent, and aftermarket declined by 10 percent year on year. The minerals division orders declined by 5 percent year on year, whereas the orders for ESCO and oil & gas division declined by 7 percent and 34 percent, respectively. The Group has suspended the final dividend for FY19 to preserve cash. The Group expects cost-saving of close to £75 million in H1 FY20 by cutting capital expenditure, reducing workforce and slashing the bonus schemes for the management. The total saving would be close to £140 million in H1 FY20, including the dividend cut and other cost mitigating measures.

On 26 June 2020, the Group secured revolving credit facility (RCF) of USD 950 million and a term loan of £200 million. The RCF and term loan are due to mature in June 2023 and March 2022, respectively, which has been facilitated with 12 banks. The RCF and term loan would replace the existing facilities that are due to mature in 2021; however, the new facilities are at a slightly higher rate than the existing one. As on reported date, the Group had liquidity of £500 million that includes cash and cash available from credit facilities. The Group also had £300 million available from the UK government's Covid Corporate Financing Facility (CCFF). In Q2 FY20, the performance of mineral's division was the same as Q1 FY20 with margins in the range of 17 percent to 20 percent supported by cost-saving measures. The ESCO division performance was resilient, whereas oil & gas witnessed a slowdown.

1-Year Chart as on July-20-2020, before the market close (Source: Refinitiv, Thomson Reuters)

Weir Group anticipates the mining aftermarket business to pick up as the ore-production volume increases. The business performance visibility of ESCO division remains limited and would depend on the mining and the infrastructure markets. The Group is uncertain over the recovery of the oil & gas sector, and thus, expects to be loss-making in FY20 but would be cash positive. The Group hopes that the cost mitigating efforts would support the business.

Rotork Group PLC is a UK based engineering group that designs, manufactures and sells products, such as Controls, Fluid Systems, Gears and Instruments. The Group classifies the revenue under three segments: Oil & Gas, Water & Power and Chemical, Process & Industrial sectors. Rotork Group is included in the FTSE-250 index.

The Group reported revenue declined to £669.3 million in FY19 from £695.7 million in FY18. Meanwhile, the adjusted operating profit increased to £151.0 million from £146.0 million a year ago. The adjusted operating margin was 22.6 percent in FY19. The Group suspended the suggested final dividend payment of 3.9 pence per share for FY19 in response to Covid-19; the interim dividend payment was 2.3 pence per share.

Rotork Group expects revenue to be lower by close to 11 percent to 13 percent year on year in H1 FY20. The revenue was down by 14 percent year on year in April to May 2020 due to supply chain disruption and shutdown of factories. The operating profit is expected to be lower; however, the Group expects the operating margin to be resilient. The Group highlighted some restructuring in H1 FY20 that would cost £2.0 million. As on 31 May 2020, Rotork Group has net cash of £125.6 million; it also had an undrawn credit facility of £60.0 million.

Financial Result by Division in FY2019 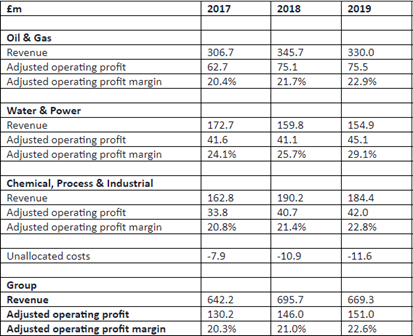 1-Year Chart as on July-20-2020, before the market close (Source: Refinitiv, Thomson Reuters)

The Group expects the group orders to be down by close to 16 percent to 18 percent in H1 FY20 compared to H1 FY19; the orders were £362 million for the same period last year. The orders in the Asia Pacific and the Americas is expected to be lower than the EMEA region when compared to the same period the previous year. The orders in the Oil & Gas and Chemical, Process & Industrial segments are expected to see some sluggishness due to the pandemic and lower energy demand. The Water & Power division performance is anticipated to be resilient. The Growth Acceleration Programme that was implemented to deliver sustainable mid to high single-digit revenue growth remains on track.