Lloyds Banking Group PLC (LLOY) is a London, United Kingdom-headquartered financial services group that offers a wide variety of banking and non-banking services predominantly in the UK. The group serves millions of customers in the country through numerous brands, including Scottish Widows, Bank of Scotland, Halifax and Lloyds Bank. The group is focused on retail and commercial financial services with a diversified customer base and operates the largest retail bank in the UK. The group offer services related to current and savings accounts, short and long-term loans, credit and debit cards, unsecured loans, investment products, mortgages, motor finance, protection, bonds and syndicated loans. It is one of the largest companies within the FTSE 100 and is listed on the New York Stock Exchange as well. The operations are organised into four operating segments, namely the Commercial Banking segment, Insurance segment, Retail segment, and Consumer Finance segment. 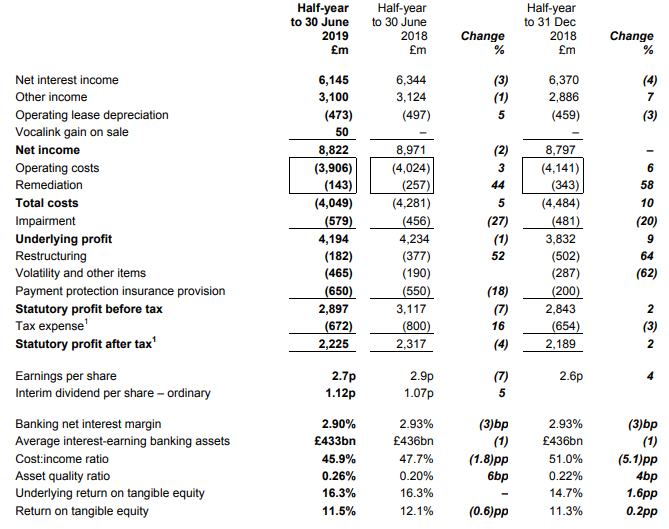 Net interest margin remained at 2.90 per cent due to lower average interest-earning banking assets, leading to a decline of 3 per cent in net interest income, which led to a decrease of 2 per cent in net income to GBP 8,822 million versus GBP 8,971 million in the corresponding prior-year period. Driven by lower remediation charges and a reduction in operating costs, total costs of GBP 4,049 million declined by 5 per cent compared to that in the first half of 2018. The cost/income ratio improved by 1.8 percentage points to 45.9 per cent, which continued to provide a competitive edge to the group. The statutory profit before tax was reported at GBP 2,897 million, which represented a decline of 7 per cent, while underlying profit was GBP 4,194 million, declining by 1 per cent over the corresponding prior-year period. Driven by lower restructuring costs and a robust underlying profit, statutory profit after tax was 4 per cent lower than the first half of 2018 to GBP 2,225 million, which corresponded to earnings per share of 2.7 pence. Return on tangible equity was 11.5 per cent against 12.1 per cent in H1 2018, while the underlying return on tangible equity was flat at 16.3 per cent. Loans and advances to customers were GBP 441 billion, and the group announced an ordinary interim dividend of 1.12 pence per share for the first half of 2019.

An increase in credit losses, write-downs or defaults due to changes in the economic environment could impact the profitability of the group, especially when the economy is in a downturn. Extreme weather conditions can increase longevity risk which can impact insurance earnings and capital requirements. Interest rates and credit spreads in the banking business can be affected by adverse market fluctuations, which has the potential to impact the capital or earnings profile of the group. While the group continues to adapt itself to the imminent threat from Brexit, especially a no-deal exit, there remains a high degree of uncertainty which can materially impact the earnings generating power of the group. There remains continued uncertainty surrounding both the UK and global macroeconomic and political environments. The risks of a slow down or even recession have increased lately, which can greatly affect the business. Moreover, the possibility of a rate cut by the Bank of England would put pressure on the net interest margin of the banks, affecting profitability margins.

To create the capacity for further investing in the business, the company continues to focus on reducing the underlying cost base and is targeting a cost/income ratio in the low 40s by the end of 2020. Additionally, it continues to expect operating costs of less than GBP 8 billion for the current financial year and net credit costs of less than 30 basis points, reflecting strong credit quality. The overall credit quality of the secured book remains strong, and the low cost/income ratio continues to provide a competitive advantage to the group. The company reported a higher net interest margin of 2.90 per cent against the industry median of 1.89 per cent and the loan growth at 2.1 per cent was also higher than the industry. While it was a bit more leveraged than its peers, the Tier 1 Risk-Adjusted Capital Ratio was at 16.5 per cent, against an industry median of 14.67 per cent.

BAE Systems PLC (BA) is a United Kingdom-headquartered global defence, aerospace and security company with operations primarily in the US, UK, Saudi Arabia and Australia. The company employs around 85,800 people around the world and delivers a broad range of advanced defence technologies that cover a wide range of applications. The companyâs business is differentiated in five operating segments: Platforms & Services (US), Maritime, Cyber & Intelligence, Air, and Electronic Systems. 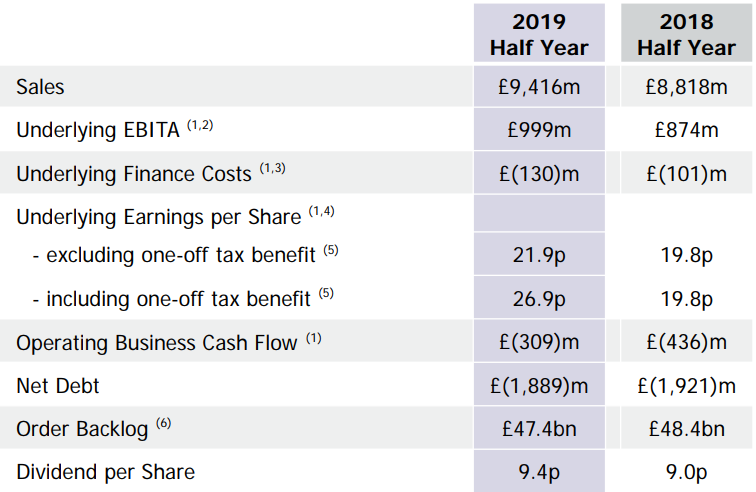 The company maintains important relationships with several its government customers with 91% of the total sales defence-related, which can be impacted by constraints on government expenditure. Movements in oil prices, budgetary constraints, political considerations or change of government policies can lead to adverse fluctuations in defence spending, which can have a material adverse impact on future results. The company is exposed to volatility in earnings from movements in currency exchange rates as it conducts its business in several regions, including the Middle East and the US. Brexit can potentially impact the group as it might have to face new barriers from the EU and the movement of goods betweenÂ the UK and the EU would also be affected.

The group has a strong order backlog giving multiyear visibility and enjoys a strong relationship with its partner countries which continue to prioritise defence and security. The company is focussed on investing in technology and research and is actively looking for organic investment opportunities. It has also made decent progress in improving the outlook and geographic diversification of the group, with established positions on the long-term programmes and a growing presence in other international markets. Research and development activities, diversified operations and growth in revenue are the major strengths of the company. The group is well placed to maximise opportunities and manage the challenges through improved programme execution and maintaining strategic capital allocation policies.