The International Monetary Fund (IMF) had a few words of suggestions for the British parliamentarians about the path that the country should take as it recovers from the pandemic-induced recession. Reiterating the importance of reducing the carbon footprint of the economy, the chief economist of the IMF Gita Gopinath advised that the government should increase its investments in green projects, not only to tackle the problem of climate emergency but also to create a significant amount of jobs in this sector. The United Kingdom is currently plagued with an unemployment crisis which it has not seen in decades, and urgently needs solutions in this regard to avoid causing long-term damages to the economy. The Institute of Public Policy and Research has already issued warnings that in the absence of an urgent government intervention, the unemployment level in the country would rise to 2.1 million, which is about 10 per cent of the country’s total workforce.

The importance of rebuilding a green economy

The menace of pollution and climate change has assumed enormous proportions in recent years. Due to air pollution alone, the UK registers between 28,000 to 36,000 deaths every year. The state of development the country has followed over the last century has now reached a saturation point, and urgently needs to be replaced with a new development model. If the pollution levels were to rise any further it will threaten our very survival, and choke the state of development itself. It is thus important that any future economic planning must incorporate measures to address climate change concerns and must promote technologies followed by necessary investments. Green technologies, moreover, have the ability to bring down the long-term cost of doing business in the economy by cutting down on expenses required to implement mitigation strategies, to counter climate change if environment pollution were to take place as before. In recent past the UK has experienced several such events that can be directly correlated with climate change and have caused massive economic damage to the country. In 2018, the country witnessed massive heat waves, which was followed by incessant rains and massive floods, like never witnessed before.

The country, however, has taken a number of steps during the past decade to reduce the threat of climate change. Till January 2020 when UK was part of the European Union, it implemented the regulations enacted by EU regarding climate change. The regulations implemented in the UK over the years included imposing emission standards on new vehicles being sold in the country, reducing the proportion of carbon emitting technologies in the total electricity production in the country and also reducing the usage of high carbon-emitting energy resources in key industries like steel and cement production. As part of the EU environment regulations, the UK was also given a time bound target to increase its usage of green energy resources in its total basket of energy resources in a gradual time-bound manner. The UK has surpassed that target consistently since 2004 and with the current momentum, it is all set to beat each of its targets into the foreseeable future. 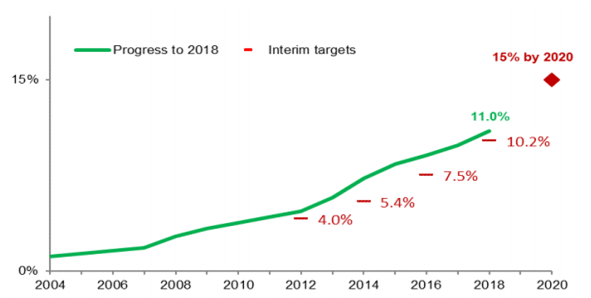 Sector-wise also, a great deal of advancement has been made in the adoption of green energy resources in the electricity production sector. However, not much progress could be made in the transportation sector despite the adaptation of stringent emission norms.

To know more do read - https://kalkinemedia.com/uk/editorial/drax-power-station-to-fully-convert-to-biomass-by-2021 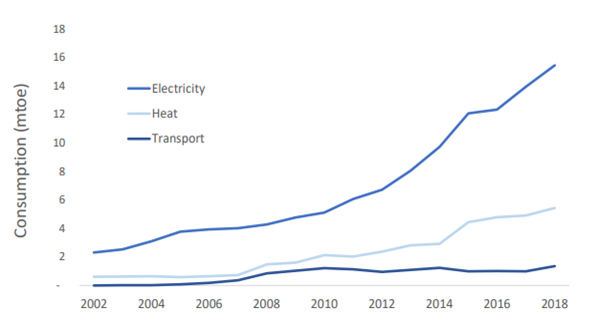 At the same time, some significant changes have taken place in the country which could set the pace for a massive reduction of in vehicular pollution. The advancement in lithium-ion technologies has made it possible to make electric vehicles that provide power and energy efficiencies comparable to that of internal combustion technologies. In recent years, the number of electric vehicles plying on British roads has been increasing exponentially and will also continue to do so in the foreseeable future.

Ever since the Boris Johnson government took over, it has laid great emphasis on increasing public expenditure to rebuild the country’s infrastructure. During its first budget presentation in the month of March 2020, the government had earmarked nearly £600 billion for the infrastructure development of the country. Other than that, it also identified retraining as one of the key focus areas, to make Britons more employable, so that more businesses would hire locals instead of foreigners.

These measures have become even more important for the UK in the aftermath of the pandemic crisis. It is commonly observed that corporates and even individuals curtail their spending during and soon after an economic crisis like this. It thus becomes imperative on the government’s part that they increase public expenditure levels during such periods so that the economic output does not shrink further. The stimulus measures rolled out by the government in the past few months have helped protect many jobs and livelihoods in the country. The government has also not shied away from increasing its public debt levels in order to aid the businesses and citizens during these times of severe crisis. Increasing public expenditure on green energy technologies and infrastructure will set a pace for the growth of this industry.

To sum up, the chief economist of IMF has only reiterated what UK already knows and has also been following with full enthusiasm over the past two decades. The coronavirus pandemic is an unprecedented situation, which might slow down the government’s climate change expenditure for some time, but it will not be able to deter it from meeting its long-term green objectives.