Japan’s longest-serving Prime Minister, Shinzo Abe steps down from the power on account of his chronic health issues. His abrupt departure, however, leaves a trail of challenges that would require dedicated focus from his successor, Chief Cabinet Secretary, Yoshihide Suga.

Yoshihide Suga has stressed on the nation’s commitment to next year Olympics. As per the organizers, the games will open on 23 July 2021.

Significantly, a fresh dose of obstacles, primarily driven by COVID-19 outbreak plagues Japan’s economy, may prove the reign of Mr Suga a difficult road ahead. The challenges could impede highly sought economic recovery for the country.

The legacy of the economic philosophy, ‘Abenomics’ and its principles advocated by Mr Abe seems to be under the spotlight, to be adopted by Mr Suga. However, the extent of implementation given the current economic landscape may differ.

Let us explore how effective did Abenomics prove during Abe’s tenure and discover the latest challenges that might require Abenomics and other measures for rebooting the scenario to pre-COVID level.

How Effective was Abenomics?

The economic policies undertaken by the Government during Shinzo Abe’s tenure were driven mainly by Abenomics. Abenomics, including quantitative easing, fiscal stimulus and structural changes, remained at the forefront of the 2012 General Elections.

When Abe took office in 2012, Japan’s GDP tumbled by 4.3 per cent as significant economic slump had hit its economy over the last one decade. The Abenomics strategies put together were focussed on beating deflation, with Abe’s Government increasing the spending and the Bank of Japan massively carrying asset buying and yield curve control.

The world’s third-largest economy witnessed bolstered exports as the aggressive economic policies of the Government aided in lifting the share market and weakening the value of Yen. The weaker value of Yen promoted foreign investment, while also enhancing the competitiveness of the Japan-exported products.

However, the skyrocketed Government’s debt level, which is around two and a half times the country’s GDP, presents a significant challenge for the country.

Japan suffered its latest post-war decline, witnessing an annualised drop of 27.8 per cent in its GDP in the June 2020 Quarter. International Monetary Fund (IMF) has projected 2020 Real GDP to decline by 5.8 per cent. Meanwhile, the 2020 Consumer Price Inflation has been projected to be 0.2 per cent. 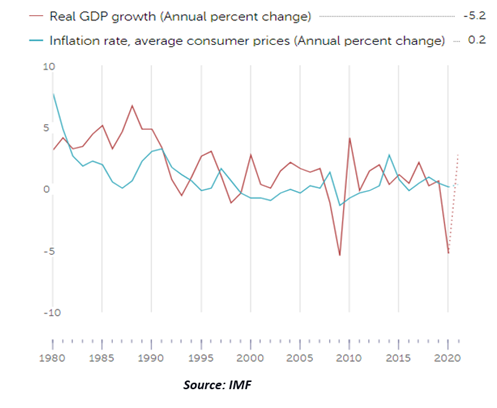 Fitch rating, in July 2020, revised its Japan’s long-term foreign currency IDR, downgrading its outlook from Stable to Negative. Fitch Agency projects the economy to contract by 5 per cent in 2020.

While the country at the initial stage was able to contain the virus, it has witnessed spike later leading to a sharp contraction in the later phases. Significantly, weaker global demand has directed towards a substantial decline in exports.

The nationwide lockdown which was imposed in mid-April impacted the economic activities of the country. Furthermore, the second wave of infection has altogether intensified the financial reboot hurdles for Japan.

Fitch projects that Japan’s GDP would not recover to its pre-pandemic level until 4Q21, indicating a bumpy road for Yoshihide Suga’s reign. Notably, the next general election in Japan is scheduled in October 2021.

Japan has struggled to increase the inflation rate in the country for years while it implemented aggressive policy measures such as quantitative easing and fiscal stimulus. Meanwhile, the negative interest rate at -1 per cent has been kept since long to increase consumer spending.

Although Abe’s economic measures proved effective in increasing inflation from -2 per cent to 2 per cent before the pandemic, COVID-19 crisis has significantly impacted the country.

Moreover, low consumer spending is another critical issue which continues to hold the achievement of a targeted inflation rate of 2 per cent.

The wavering employment scenario post the pandemic along with sluggish wage growth in the past few years seem to impact the consumer’s sentiments. The consumer price index for Japan in August 2020 was 102, which showed a dip of 0.1 per cent from the previous month on a seasonally adjusted basis. 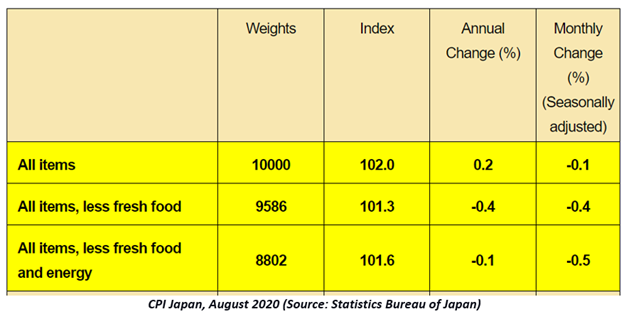 Undeniable, despite the lifting of lockdown measures amalgamated with the substantial fiscal stimulus, Japan’ s government would need another dosage of confidence to boost the stalled consumer spending.

With the onset of the pandemic, the Government launched massive fiscal stimulus worth USD 2 Trillion in response to the sudden tumbling in economic activities. Varying measures, including the transfer of funds to individuals and companies, and rent-related subsidies as well as concessional loans, formed an integrated component of the fiscal measures.

The fiscal deficits owing to the Government’s response has further accentuated the colossal debt problem, which had already plagued the country. Given the current circumstances and Japan’s record before the pandemic when the economy was faring much better, the debt challenge would be one critical agenda for the new Prime Minister, Mr Suga.

The looming Olympics and many of the outstanding economic and political commitments of Abe would demand Mr Suga tackling debt, deflation and structural issues currently being faced by the country. The recent free trade agreement (FTA) secured between the UK and Japan would serve to boost the economic reboot plan.

Meanwhile, Yoshihide Suga has indicated that he might adopt similar measures relying on stimulated spending for dealing with the ongoing challenges. However, economists are closely monitoring the impact of critical government debt scenario and collateral damages from the pandemic on the implementation of Mr Suga’s plan.