While the COVID-19 pandemic initially spurred a rally in the US dollar amidst heightening worries over the virus crisis, the greenback seems to be on the brink of ending its long-run bull cycle.

The US Dollar index (DXY), which traces the American currency against a list of other currencies, has dipped by ~9 per cent since March 2020 highs. The extent of monetary policy stimulus by the Fed, an increased drowning of USD by other central banks and record low level of interest rates seem to have depreciated the greenback.

Over the past few months, the US dollar has been under the pressure against a broad basket of other currencies, including the Australian dollar and Chinese Yuan. While the Chinese Yuan has been strengthening sharply against the greenback, the AUD/USD pair has slightly pulled back after extending its months-long surge from March 2020 lows.

Do Watch: AUD and Yuan Strengthening Against Greenback, All You Need to Know! 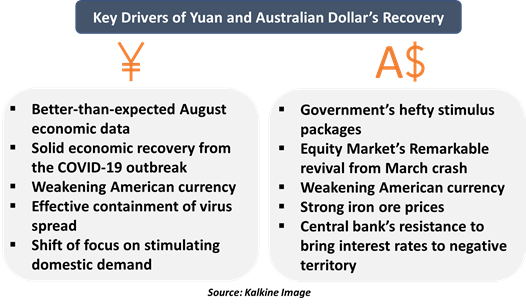 Yuan Rallying Against the Greenback

The nation’s retail sales grew for the first time in August 2020 since the outset of the COVID-19 pandemic. As per China's National Bureau of Statistics, the country recorded a year-on-year surge of 0.5 per cent in retail sales of consumer goods during August.

Besides, the nation’s industrial output rebounded more quickly than retail, growing by 5.6 per cent year-on-year in August.

In addition to robust economic data, effective containment of virus spread is further giving a leg up to yuan in fortifying against the American currency.

Besides, while China has been favouring relatively weaker exchange rate over the last few years to fuel economic growth, the focus seems to have shifted on stimulating domestic demand.

Despite weak macroeconomic fundamentals and second-wave infection threats, the Australian dollar has continued to strengthen over the past few months. The AUD/USD pair has recovered by ~28 per cent from the March 2020 crash, when the coronavirus-induced market meltdown was in full swing.

Do Not Miss: Aussie Dollar Under Bull Run- What Are Chartists Looking At?

The factors which appear to have lent a helping hand to AUD’s upturn, include:

The Australian currency rallied consistently over the last week, before plummeting later during the week amidst a fall in iron ore prices on Thursday (17th September 2020).

Must Read: 5 Economic Gauge Points that are making every Oz dollar count

Recent Pressure on AUD under the Spotlight

Lately, the Australian currency slipped to 72 US cents after the Reserve Bank of Australia’s Deputy Governor, Mr Guy Debelle flagged the possibility of policy options like negative interest rates and currency market intervention.

Last week, the RBA also admitted that a weaker Australian dollar can support the nation’s revival from the COVID-19 crisis.

Outlook for Yuan and Australian Dollar

Speculations are rife that the yuan will continue to rise against the US dollar in the months ahead, backed by escalating US-China trade tensions and the urge to develop domestic consumption market.

However, the performance of the Australian dollar is likely to fade over the coming months, due to potential withdrawal of government support and deteriorating trade relations between Australia and China.

Besides, surging COVID-19 cases worldwide and growing uncertainty may induce shift in investors’ sentiment towards haven currencies like the US dollar, putting downward pressure on the Australian currency.

Experts continue to expect a sustained weakness in the US dollar over the coming months amidst deeply negative interest rates, stronger economic growth prospects in the global economy and high valuation of the greenback. However, a second round of lockdowns in countries reeling from the virus crisis may turn the tables around.