The mania for Electric Vehicles (EV) has taken the world by storm, with the escalating popularity of battery-operated motors bucking the globally dismal trends of COVID-19. Significantly, the rise of EV vehicles promises a new dimension worldwide, catalysing the transition to an ecologically sustainable landscape.

Europe has climbed on the EV bandwagon as the fame of battery-operated vehicles among the consumers beats down that of conventional automobiles. While China continues to dominate the EV manufacturing market, European countries and other top economies are jockeying for the top seller of plug-in electric cars.

Tesla shares, remaining unfazed by the COVID-19 implications exhibited a strong momentum of 4.6x on Wall Street on the year-to-date basis. This was noted at a time when the crude oil prices touched rock bottom as the pandemic brought the world to a halt.

ALSO READ: Is Tesla (NASDAQ:TSLA) maintaining its lead in the Battery Electric Vehicle race in Europe?

Let us explore what is driving this massive rise in popularity of EV as European nations continue to emerge as a hotspot for this growing market. 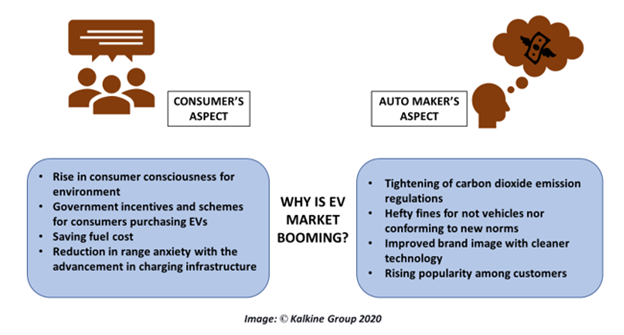 Europe’s rapid advancement towards EV adoption is driven by a series of incentives offered by the Governments. EU nations and the UK continue to push forward subsidies that altogether makes the purchase of electric cars more affordable.

Governments for a considerable amount of time have advocated the necessity to shift to more sustainable alternatives owing to rise in environment’s deterioration. The additional exemptions in taxes affixed to the purchase of EVs incentivise the buyers by offering encouraging monetary means.

Germany has introduced a reduction in VAT percentage in July this year along with offering tax exemption for the EVs. Furthermore, the buyers can avail subsidies for EVs having the sale price <€40k.

France may offer grants based on the price and CO2 emissions per kilometre, driving more ecologically conscious purchasing among the buyers. French scrappage scheme and Registration tax exemption for most metropolitan cities in the country is another boost for EV car sales.

The UK also provides incentives in terms of tax exemption for the vehicles which have zero-emission.

Launch of the Cost-Effective Models: Luring the Buyers

The new editions of cars tend to encapsulate the technological advancements, allowing the manufacturers to offer more affordable electric cars. Meanwhile, usage of smart technologies in electric cars is taking the automobiles segment to a new spectrum of innovativeness.

The improvements and revisions by the car manufacturers appear to be diminishing the range anxiety of the buyers. Significantly, range anxiety refers to the worry related to EVs that the battery would run out before one reaches the destination.

Growing Ecological Concerns: Offering a Nudge to the EV market

The norms around the emissions from automobile continue to tighten as the Governments set forth to take meaningful actions for ecological sustainability. With emissions from cars contributing a significant rise in the CO2 level, (the main greenhouse gas), the Government bodies in Europe have been implementing phased approaches to cut back the emission.

The average CO2 emission target from EU new cars measured is set to be 95 g/km, which is significantly lower than the previous emission approval. Furthermore, there is a transition in test procedures from the New European Driving Cycle (NEDC) to Worldwide Harmonised Light Vehicles Test Procedure (WLTP), with the latter recording 23% higher emission values (as per a Deloitte report).

Interestingly, if the car manufacturers fail to comply with the emission target, they must face a fine of €95 for the excess of CO2 released (in grams) multiplied by the number of new registrations of passenger cars. The recent developments in emission policies seem to offer strong support to the EV market.

Lens through the Best Sellers of September 2020

September 2020 has proven exceptional for BEV sales in Western Europe as the sales reached record high for the month. As per the European Electric Car Report by Matthias Schmidt, 90,000 BEV passenger cars were registered across the 18 markets of Western Europe in September 2020.

The high-performing EVs from auto manufacturers such as Tesla, Volkswagen, Renaults, Ford, and Volvo, heightened the buzz around the electric vehicles market. They grabbed consumer interests during the month, achieving a significant rise in overall sales of EVs.

The climate of the EV auto space remained highly competitive as the US carmakers such as Tesla and Ford competed against their European counterparts.

Some of the key models that remained in the spotlight included:

Tesla continued to be the leader of the EV car sales with the launch of its much-awaited Model 3 in the international market. Tesla Model 3 is considered to be the considerable affordable and safe, offering a significant boost to its sale. Given the absence of European-based production facility, the auto manufacturer held the top spot indicating the massive enthusiasm for the Elon Musk’s innovative drive in the auto space.

While due to COVID-19 implications, the Company faced production issues in the California facility and Chinese production seems to offer nudge to its car supply in Europe. The Company in October has commenced exporting the Model 3 cars produced in its Shanghai-based Gigafactory to European nations such as Germany, France, and Italy.

ALSO READ: All the latest about electric vehicle and clean energy leader Tesla.

The figures from Industry analytics JATO indicated that while Renault Zoe slipped to the second spot during September, it continued to witness an increase in its sale. Renault’s Zoe has been awarded as Best Small Electric Car in the Parkers New Car Awards 2021.

The revamped version of Zoe offers a driving range of 245 miles, appear to be addressing the range anxiety of the buyers.

Volkswagen’s ID.3 also remained among the top-selling cars of September 2020 while the company kickstarted the presales of its fully electric new SUV in the month.

The battery for the VW ID.4 stores net energy up to 77 kWh, offering drive range of 520 km. The company along with launching its two preconfigured edition models including the ID.4 1ST and ID.4 1ST Max would also introduce ‘We Charge’, which would ensure convenient charging of electric cars both at home and on the journey.

EV players appear to be relishing the recent turn out of events with both the Government policies and the consumer’s conscious boosting the popularity of the plug-in electric cars. Meanwhile, the auto manufacturers have lost no time in adapting to the ongoing transition as new and advanced versions of EV cars continue to root out some major dilemmas around the battery-operated vehicles.