The world is warming up to Bitcoin at a great pace. Having understood that Bitcoin is not likely a bubble in the making, institutions are jumping onto the bandwagon. The fear of missing out (FOMO) is real. 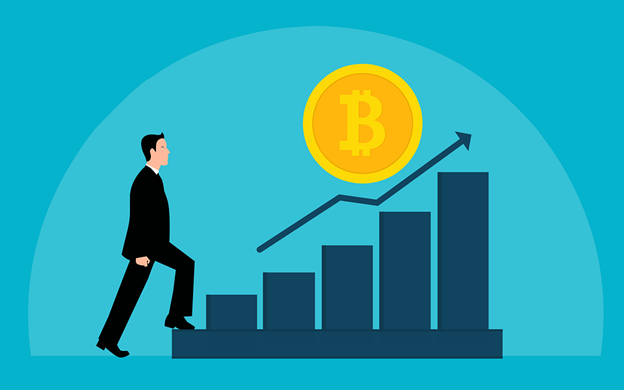 North America’s first Bitcoin ETF was approved by Canadian securities regulators earlier this year. It has been a no-looking-back scenario ever since. By mid-April, the Purpose Bitcoin ETF had attained the US$1 billion mark. These billion-dollar assets were a culmination of a record-breaking streak of the ETF after it was listed on the Toronto Stock Exchange (TSX).

The US Bitcoin ETF might be a reality soon

Reportedly, the US securities regulator SEC is likely to approve the first Bitcoin futures ETF in October 2021. This speculation is backed by an SEC tweet in which it advises investors to “carefully weigh” risks before they decide to park money in any such product.

Fund managers including Valkyrie and Galaxy Digital Funds are said to have sought approval for Bitcoin ETFs in the world’s largest economy and purportedly, the biggest mining center for Bitcoin.

What is a Bitcoin Exchange Traded Fund (ETF)?

In simple terms, these products allow investors exposure to BTC without having to actually trade it. This means that investors have not to worry about storing their BTC holdings in a wallet.

ETFs, in particular, track the movement in the price of any underlying asset. Some ETFs can also have more than one underlying security, which allows diversification for investors. In the case of a Bitcoin ETF, the investors can evade crypto exchanges like Coinbase and Binance, and invest in the traditional market. It is usually safer to deal in the conventional market considering regular crackdowns on crypto exchanges in multiple countries.

Short selling, which cannot be undertaken on a dedicated crypto exchange, is possible with ETFs. This is done when the investor anticipates a decline in the price of the underlying security.

SEC’s approval of a Bitcoin-related ETF

Recently, the SEC approved an ETF -- not a pure Bitcoin ETF -- that tracks movement in prices of stocks having exposure to BTC. The underlying securities relate to companies that derive most of their revenue from Bitcoin-related activities. These can include BTC mining or the manufacturing of rigs. The Volt ETF is said to be placing 80 per cent of its assets in companies undertaking BTC activities.

How has Bitcoin performed so far?

There are two things to consider here. First, the gains or losses in the value of BTC in 2021, but before we look at that, let’s count some positive developments that cannot be quantified.

Institutional interest in BTC has gone through the roof in 2021. The S&P Dow Jones has launched indices that would track the movement in prices of BTC and its nearest rival blockchain, Ether. This was followed by El Salvador’s announcement that made Bitcoin finally a legal tender in a country. 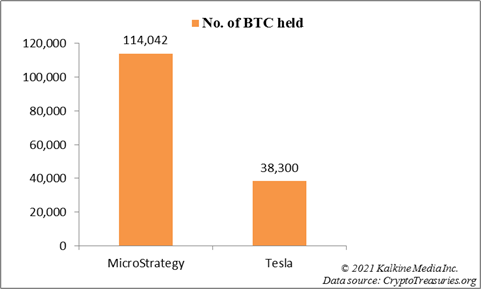 Despite the negative sentiments hitting the crypto market after China’s crackdown, Bitcoin’s YTD gains are promising. But the ride had a few hiccups after BTC nearly touched the US$65,000 price tag in April.

As of now, BTC, the crypto with the highest market cap in the cryptocurrency market, is trading at nearly US$58,800 apiece. This compares with the price of about US$29,000 on the first day of the year 2021. 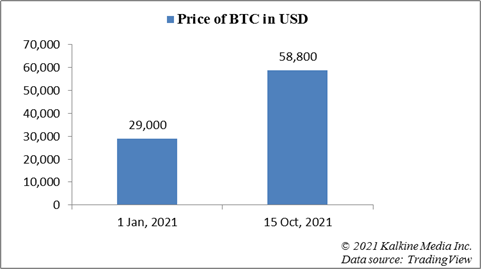 For the past few weeks, Bitcoin has been on a rise. Three months back from now, it was trading at nearly US$31,500. By early September, the price crossed the US$50,000 mark.

Analysts believe that the listing of the first Bitcoin ETF in the US might be a watershed moment. Ever since the news of the approval of the Volt ETF broke in early October, BTC has been gaining traction. It could just be a matter of a few days or weeks that BTC surpasses its all-time high, given that the momentum sustains.

The launch of the first-ever Bitcoin ETF in the US will be a significant moment for the entire crypto space and its backers. This is likely to lift the spirits of both short-term and long-term BTC investors.

The SEC is a closely-watched markets regulator by the entire world, and an approval might open new avenues in other countries. Bitcoin’s price has been surging of late, and the ETF may add more steam. For investors, this might be the easiest way to park money in cryptos without actually holding and trading them.