What do you mean by the term Weightless Economy?

Weightless economy refers to the significant shift in the priorities of major economies from the production & manufacturing of traditional goods and services to the production of intangible stuff.

What do you mean by the term Weightless Economy?

A weightless economy is an economy based on knowledge, innovation, and education. Before the 21st century, economic growth mainly depended on increasing the total quantity of physical goods for production. However, intellectual capital has assumed more significance in today's time than physical capital to produce higher quality stuff. This hints that the size of the weightless economy is increasing rapidly, especially in developed countries.

Who invented the term weightless economy?

The term weightless economy was coined by Danny Quah, an economist at the London School of Economics, in 1999. He invented the term in response to the drastic changes that were taking place in the economy at that time. During that time, Quah witnessed an increase in service jobs and a simultaneous drop in production jobs. However, there was a positive effect on the GDP, given the arrival of information technology and intangible assets. According to him, the lightweight nature of the changing economy begun a new era called the digital economy. Thus, the weightless economy is sometimes referred to as digital economy, as digital assets or intangible assets replace physical assets like cash. 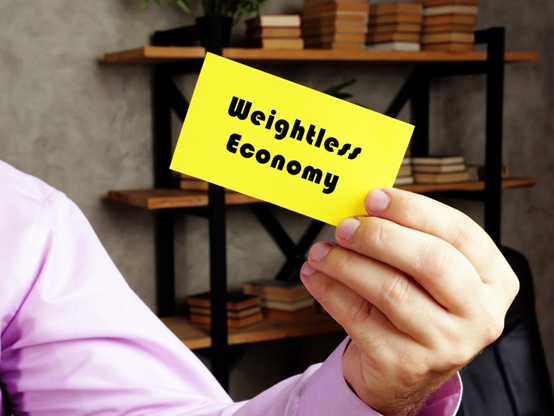 How has the weightless economy changed the life around us? Explain with the help of examples?

A weightless economy is also known as a dematerialised economy. New technology such as microcomputers has drastically reduced the weight and size of goods. As a result, the weightless economy puts less pressure on our physical resources, which are limited in nature. For instance, we have as much computing power in our devices as what would have filled several rooms in the late 20th century.

According to Quah, the new products are made up of bits and bytes instead of concrete and iron, and thus can be directly downloaded from the internet. Computer software, I-cloud, and interactive digital media are also few examples. Another example is, despite having just virtual existence, the pop group Gorilla was a big success and had a top ten hit record and digital games that can be downloaded and played with the help of the internet. 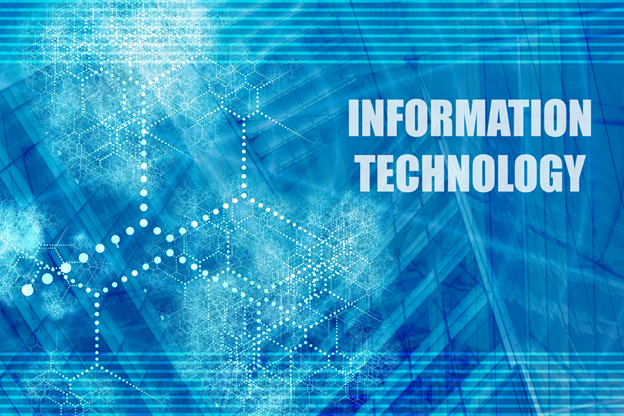 For example, earlier, a singer/musician used to record songs only once under a record company. After that, the CDs and vinyl records of the song were manufactured, packaged, and moved from factories to warehouses. Finally, the CDs were delivered to record stores where the customers used to purchase them. All these stages involved cost and labour.

However, in the current situation, we see artists distribute their songs online via streaming services like Spotify or other mediums like the iTunes store. While the time required to produce the music has not changed much, the delivery method has considerably altered. Whether there is only one customer or millions of customers for that song, its delivery is instant and virtually effortless.

For an economist, this would mean that the musician has approximately $0.0 marginal cost of production. As a result, the marginal profit related to the sale of each additional song is 100%. Therefore, once a song is recorded and is available for online sale, it doesn’t cost a musician a single penny to sell the additional units. This is also one reason why some IT companies become so successful in a short period.

If a demand for a particular product picks up in a weightless economy, nothing can stop a company from having many customers. A company achieves limitless success if its product or services start dominating a given market. For example, the products of Microsoft and Apple. These products spend money on marketing and quality enhancement techniques; however, their production costs are significantly low.

Thus, a weightless economy paves the way for sustainable growth by helping economies grow without affecting the needs of the future generation and depleting natural resources. Moreover, international trade is not about shipping tangible goods from one country to another in a weightless economy but bouncing bits off satellites.

What is the present status and future of the weightless economy?

Economists believe that the economies of the world’s leading industrial nations will double in size by the year 2036. Intangible assets for S&P 500 companies reached an unprecedented value of $21 trillion in the year 2018.  The three characteristics of a weightless economy include a) High initial development costs, b) Infinite distribution c) Minimal production costs. 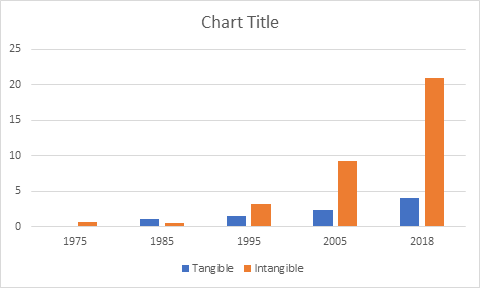 Companies with the highest intangible value

What do critics say about weightless economy?

Critics of the weightless economy believe that personal computers and other hardware still must be manufactured and transported worldwide, using natural resources like including oil.