What is the Solidity language?

Solidity is a statistically typed, curly-bracket and object-oriented programming language for developing Ethereum-based smart contracts, which is written directly as a code. This code helps in executing the transaction (buying and selling) and makes them irreversible and trackable.

Using Solidity, one can create contracts for crowdfunding, multi-signature wallets, voting, etc. It is advisable to use the updated version of the language to enjoy new features and avoid any bug issues. 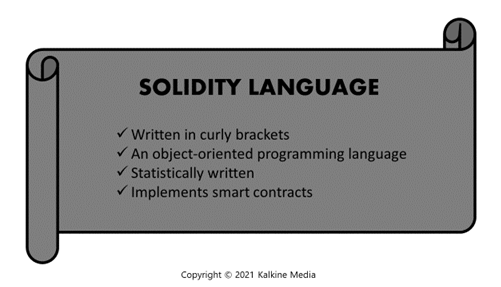 Who introduced Solidity, and why was it necessary?

Gavin Wood, a computer scientist, introduced the concept of the Solidity programming language in August 2014. Christian Reitwiessner took forward the idea, developed the code with the help of his team, and officially released it in August 2015.

The Bitcoin network works on a peer-to-peer model and is used to sell and buy Bitcoins. On the other hand, the Ethereum network was created to exchange anything of value, not just the cryptocurrencies.

The Solidity programming language is primarily influenced by C++, JavaScript, and Python.

The structure of the statements (or syntax) for the concept of overloading functions, loops, variable declarations for conversions, and many other details are influenced by the C++ language.

JavaScript partly influenced Solidity in its early days primarily due to the keyword ‘var’ and function-level scoping of variables. JavaScript’s influence was reduced in Solidity post the release of version 0.4.0. The remaining similarity is the usage of the keyword ‘function’ to define the functions in Solidity.

The solidity programming language can be used for:

EIB took advantage of Ethereum’s distributed ledger technology for the registration and settlement of the digital bond.

According to reports, EIB believes that the digitalization of capital markets can bring the following benefits to the participants and market:

How are Westgold (ASX:WGX) shares reacting to FY22 production results?

PEB, RUA, TRU, OCA: Why are these 4 NZX healthcare stocks in focus?