What is XML (Extensible Markup Language)?

XML (Extensible Markup Language) is a text-based markup language. It is derived from SGML or Standard Generalized Markup Language. XML tags, unlike HTML tags, detect the data and are used for storing and managing data.

What are the characteristics of XML?

What are the Advantages of XML?

An Example to explain XML

A simple code to represent the above hierarchical structure in XML: 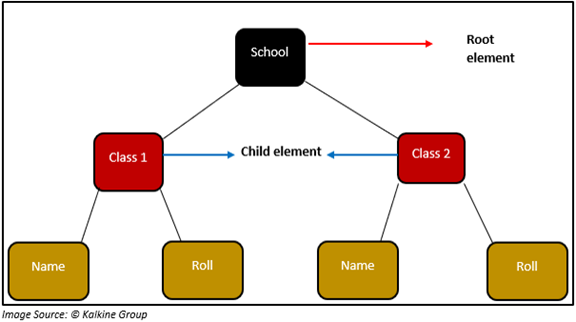 //*{mandatory line to start xml and is called declaration}//*

In this code, we have created our own tags like <college> <class> <name> and <roll>.  As highlighted in the diagram as well, there is a root element, and while writing an XML code, it is mandatory to have a root element.

It should be noted that the tags used in the code are case sensitive. Hence, the opening and closing tags should be in the same case (upper or lower). Also, XML is dynamic in nature.

How to Import an XML file into Excel?

One can import XML files in an Excel workbook to make them more readable for humans. The BI tool, Power Query makes it easy to import an XML file and transform it as per the user’s requirements.

Suppose you save the XML file mentioned above on your system as student.xml. To import the file, follow the steps mentioned below:

What is an XML map?

XML maps are ways by which MS Excel (Excel) represents XML schemas within a workbook.  Excel uses maps using binding data from the XML file to cells and ranges on the worksheet. Through XML maps it is possible to export data from excel to XML. If there exists an XML map on the worksheet, the user can import data into map ant time.

XML schemas describe the elements used in the XML document and can be used by the programmers to verify each item in the document. It defines an element, attributes, and data types. Through XML map, XML schema gets copied to the workbook to create map instead of referencing the schema as an external file.

Using XML Maps, you can add and delete maps.

Once the XML file and schema are imported in the Excel file, the user can add further details and make desired changes. The edited file can again be exported to XML.

Where we develop XML code?

To create and modify XML code quickly and effortlessly, we can use Microsoft XML Notepad. With this tool, the structure of the XML data is shown graphically in a tree structure. The interface presents two panes: