What is a regressive tax?

It is the type of tax in which that tax rate decreases as the taxable income increases. Thus, higher incomes are charged less, while the burden of taxation falls majorly on the lower income groups. This type of tax is the opposite of a progressive tax.

Therefore, a regressive tax includes those taxes for which the tax rate decreases as the taxable amount increases and, in such cases, basically the tax rate is the same for all income groups but affects each group differently. 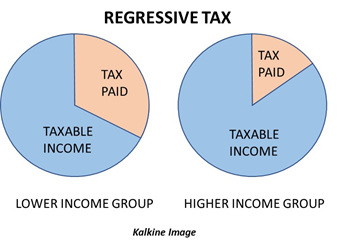 How is a tax determined to be regressive?

Based on comparisons between the average and marginal tax, taxes can be categorised as regressive, progressive, and proportional.

The marginal tax refers to the tax paid on an additional unit of income. Under the marginal tax, taxpayers are divided into tax slabs or tax brackets which help in determining the rate to be applied for taxing their earning.

Why are regressive taxes adopted?

What are different types of regressive taxes levied on goods? 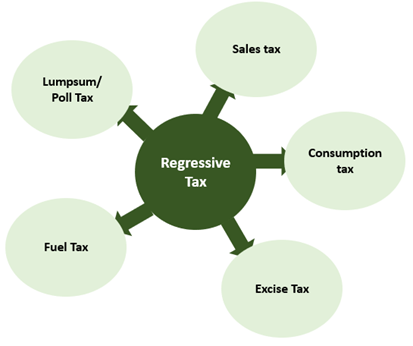 Why is the Value Added Tax an important topic of discussion?

VAT is a type of special excise duty levied on certain select goods. It is implemented in European countries and certain other parts of the world. It is highly debatable whether VAT is a regressive tax or not.

The severity of its implementation is affected by the goods on which VAT is levied. For instance, VAT should be ideally implemented on luxury items. This would not make it regressive as lower income groups are less likely to purchase luxury goods.

However, the argument arises when VAT is implemented on other essential goods that are not luxury items. Implementing VAT on these goods can make it a regressive tax.

The marginal propensity to consume declines with increased income. Individuals are less like to spend more than they are to save as their income rises. Because of this reason, higher income groups would pay a lesser proportion of their income as VAT, when compared to the lower income groups. This makes VAT a regressive tax.

But it can also be argued that lower income groups would spend more on essential commodities that do not have VAT levied on them. Thus, it would not hurt them as much as it would hurt the higher income groups.

Therefore, the goods on which VAT is levied affect how regressive the VAT truly is.

From Emyria to Starpharma: Latest updates on 5 ASX healthcare stocks