VAT stands for Value-added tax, which is a consumption tax imposed on goods and services. The tax is paid to the government at every stage of production or value addition – from production to sale of the final product. The value-added at each step of the supply chain is identified, and tax is levied on the value-added.

The consumer ultimately pays VAT as sellers at the starting stage of the supply chain gain reimbursement of the taxes they have produced from the subsequent buyer. Therefore, it is also known as the consumption tax. 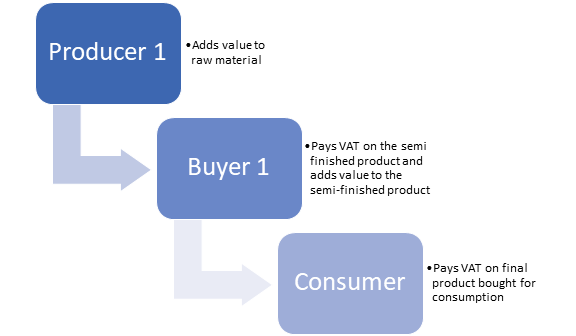 Why was VAT introduced?

VAT was introduced to eliminate double taxation. Earlier, the tax was levied on every stage of the supply chain on the final product. In effect, the buyer paid the tax which the previous buyer already paid. Ultimately, the consumer paid tax which was already paid.

After the introduction of VAT, the tax was paid on the value-added services only. It resulted in improving the compliance system.

VAT is a source of revenue for the government without putting pressure on the wealthy as done by income taxes. Similarly, VAT is paid by all the consumers.

What are the components of VAT?

VAT is calculated by deducting input Vat from Output VAT.

Output VAT – The consumer pays for the product and services purchase by them. Here, the customers add value throughout the supply chain, for example, wholesalers, manufacturers and retailers.

What does it mean to be registered under VAT?

What is the difference between sales tax and VAT?

VAT and sales tax are similar; however, the difference lies in the stages at which these taxes are imposed.

What are the advantages and disadvantages of VAT?

Who is benefited from VAT?

Traders – Trades can be enhanced as uniform VAT is adopted across the industry.

Consumers – Wealthy and affluent consumers do not have to pay high taxes like income tax.

Government – It is a revenue source, and with a digital breakout, the collection procedure has become easy.

What is the process of VAT collection?

Why is GST introduced over VAT in the majority of the countries?

To overcome the cascading effect in the tax system, and to add simplicity in the tax structure, GST (Goods and Service Tax) is adopted by many countries over VAT. However, few products categories are not covered under the GST regime and still follow the VAT regime.

It has been estimated that approximately 160 countries have adopted GST regime which France first adopted in 1954.

GST addresses few disadvantages of the VAT regime. For example, the rate of Vat was different for each state and might create a situation of conflict between the state and local government. However, in GST a uniformed tax rate is imposed across the nation.

The state government had the authority over the VAT collected. Under GST the amount collected through GST is divided between the state and centre government.

FPH, AFT, OCA: 3 healthcare stocks to watch ahead of Budget 2022