What is a luxury tax?

A luxury tax is a tax imposed on those goods and services that are possessed by only the affluent sections of the society. These goods are luxury goods. The idea is to tax the richer sections of society. Some of the items that come under luxury taxes include perfumes, luxury cars, jewellery, etc.

The ethical reason for the introduction of luxury taxes was to prevent economic spending on unnecessary and non-essential goods. Conversely, in the modern world the revenue earned from luxury taxes overweighs the ethical intent behind the tax.

It can be implemented through a sales tax system, value added system or as a customs duty. 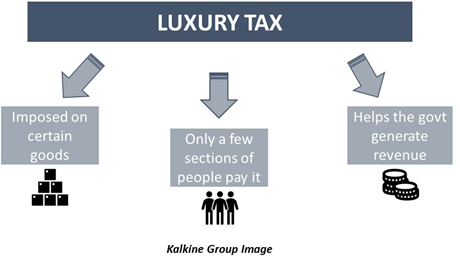 When were luxury taxes introduced?

Luxury taxes were first introduced in France in 1918. The purpose of the tax was to attack manifestations of wealth and rather than instruments of labour. A luxury tax would strike enjoyment but not the industry producing luxury goods.

The luxury goods were classified into 2 categories as follows:

These taxes were not well received by the public as there were many protests in France. People perceived the tax as a tool for the government to earn more revenue. Thus, the luxury tax was eventually removed and was later introduced with major changes.

England was the second country to introduce the luxury tax in 1918. Most countries were criticised for implementing the luxury with the intent of increasing revenue rather than checking spending.

What are the categories of luxury taxes?

In current times, luxury taxes have evolved, and they have the following two categories:

Both these categories were relatively well received by the population as they hit only selected individuals in the economy.

Why are luxury taxes important?

Luxury taxes are indirect taxes, the burden of which falls on the consumers. The goods on which luxury taxes are levied include private jets, expensive cars, yachts, etc. In essence, a luxury tax is supposed to bring more equality in the economy by taxing the ultra-wealthy population. The revenue collected from these wealthy sections of the society would be ultimately used as government spending which will benefit the entire population. Therefore, a luxury tax is not a regressive tax but is a progressive tax. A regressive tax is one which affects the lower income groups more than it affects the higher income group.

What are the challenges of implementing a luxury tax?

Government must adopt a luxury tax cautiously as there have been many previous instances where a luxury tax has failed to serve its purpose. For example, in the US, the luxury tax had to be abolished as it ended up hurting the sellers of these luxury items and it did not even generate as much revenue as was expected out of it. There was also a black market that had formed for these luxury goods, which is another challenge that comes with luxury taxes.

The major challenge in adopting a luxury tax anywhere in the world is to identify which goods can be termed as luxury goods. The variations that exist in the definition of the term “luxury item” make it a somewhat vague subject. With the goods that hold a large price tag, it becomes obvious that they must constitute as luxuries. However, the part that difficult to answer is where to draw the line.

The erroneous classification of everyday items as luxury goods can be motivated by many reasons which are mostly political. It has been observed that luxury taxes are often imposed during times of war, to increase the government revenue. This can also be done to obtain revenues in times of distress when other types of taxes can not be increased.

These motives by the government may go unfulfilled as sometimes a luxury tax might fail. If goods lying only on the more expensive side are taxed, then it is possible that their demand falls sharply. Thus, the government would not be able to earn the expected revenue and the tax would fail.

Any real-life example of a luxury tax being implemented?

The Australian Taxation Office has implemented a luxury car tax on imported vehicles. These vehicles are valued above a certain threshold, which makes them fit to be deemed as “luxury cars”. The LCT value is calculated given by the car’s sale price minus any LCT included in the sale price and minus any other taxes or fees.