Pigouvian tax (also written as Pigovian tax) refers to the tax imposed on those economic activities that lead to a negative externality in the economy. These economic externalities lead to costs which are borne by third parties. A Pigouvian tax reverses the market inefficiency caused by an externality by increasing the market prices.

When the actions of a firm or an individual lead to a cost that is incurred by a third party then it is called a negative externality. An example of this can be the dumping of factory waste by a firm into a river that is a necessary means of survival for the individuals situated near the river.

The theory of Pigouvian tax was given by British economist Arthur Pigou. In his book “The Economies of Welfare” published in 1920, Pigou explained how economics can be used to improve the lives of the poor and needy. He asserted that adopting preventive measures during the production process could make the markets a lot more efficient.

Pigou maintained that the classical ideology of an invisible hand guiding the economy towards the optimal equilibrium was false. Instead, he believed in firm government action to prevent externalities. This included “bounties and taxes”. For instance, Pigou pointed out that the producers and sellers of intoxicants were not associated with the costs required to fund policemen and other law regulators. These policemen would, in turn, be responsible for managing individuals who had been under the influence of these intoxicants.

The idea of externalities was first given by Alfred Marshall, a British economist. But Pigou, being his student, extended the idea and finally popularised the theory of a tax to increase efficiency in market.

How does a Pigouvian tax work? 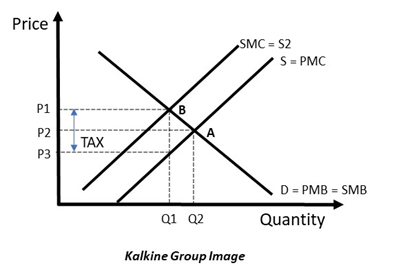 To understand the above diagram, following full forms are necessary:

SMC = Social Marginal Cost, which refers to the cost of the production of a single unit of the good, incurred by the entire society

PMC = Private Marginal Cost, which refers to the cost incurred by the firm to produce a single unit of the good.

SMB = Social Marginal Benefit, which refers to the benefit enjoyed by the entire society on the consumption of a good.

Free market condition refers to the economic state where the externality establishes itself because of the unregulated actions of a firm. Firms operate with the intent of maximising profit and do not internalise the negative externality. Thus, the Social Marginal Benefit (SMB), which represents the demand in the economy, is equal to the Private Marginal Cost, which is the firm’s supply.

The Private Marginal Cost is less than the Social Marginal Cost. Thus, firms can produce more than the socially optimal level of production. The social marginal cost is greater because the actions of the firm lead to a cost to the society which may come in the form of increased pollution, health-related issues because of passive smoking and the usage of chemicals in farming.

The value of the tax should be equal to the value of the damage caused by the firm’s production activities. The tax increases the production cost of the firm. This cost is passed down to the consumers in the form of increased prices. This reduces the demand, and therefore, the quantity produced would decline. This would lead to the socially optimal quantity being achieved.

How is Pigouvian tax beneficial to the society?

It also helps discourage behaviours that would lead to a negative externality in the economy. For firms that cannot avoid overproduction, a Pigouvian tax helps raise the revenue to reduce the externality caused by the production process.

How is Pigouvian tax disadvantageous to the society?

The externality of a production process can be hard to measure especially when it is measured in terms of aspects like environmental pollution. Thus, it becomes difficult to determine the amount of tax, which should ideally be equal to the amount of externality.

In addition, if the tax is not implemented correctly then it can further cause higher inequality in the economy and make the tax more regressive. If the government offers too many exemptions to companies, then the burden of the tax would fall on only a few companies. Therefore, the implementation of the tax should be fair and correct.

What is windfall tax? Will it affect soaring energy prices?

Waiting for Macquarie’s next dividend? Here’s what you should know