An externality is a cost or a benefit associated with an economic activity that affects a third party not related to the activity. Externalities can be positive or negative, depending on the impact they have on the receiver. Negative externalities can be extremely harmful to not just a firm, but for the society at large.

The receiver of an externality can include any firm other than the one causing it, or individuals. It can also be incurred as a welfare loss or received as a benefit to society. The cost or benefits may be financial and can end up reducing a firm’s revenue in case of a negative externality.

One of the leading causes of externalities are poorly defined property rights. Some intangible goods are hard to account for and given ownership of. These include intellectual property, pollution, climate change, research & development activities and so on.

All these externalities cannot be quantified and segregated based on ownership. For instance, pollution caused in a city can not be differentiated based on the firms causing it. Thus, it becomes difficult to measure them and associate them with individual firms.

Similarly, it may not be possible to find out who are the receivers of an externality. Taking the same example of pollution, one can see that it is practically impossible to measure the ill-effects of pollution caused to every individual in a city. Even if the firms causing an externality were to compensate the receivers, it would be far too challenging to find out who the receivers are and how much compensation should be offered to them.

This is also a significant reason why the inequitable distribution of resources occurs. For instance, a firm dumping factory waste into a river may not realise that the river is the primary source of sustenance for the people of that area. However, it is possible that the same firm might be fulfilling its water requirements from other cleaner water bodies.

How are negative and positive externalities differentiated? 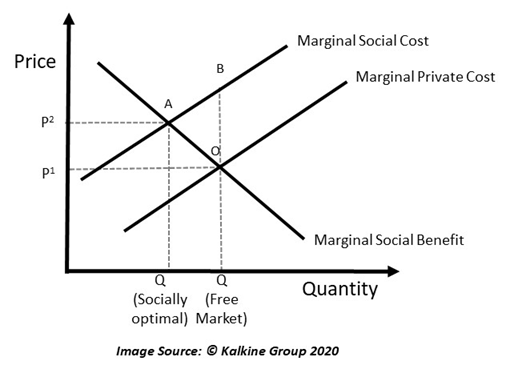 Here, the free market output is determined by the firms individually at the intersection of market demand (MSB Curve) and the market supply (MPC). However, the cost to society is higher than the cost to the firm. This is the reason why the MSC curve lies higher than the MPC curve.

The free market output is higher than the socially optimal output. This implies that there is overproduction in the economy. Here, triangle OAB represents deadweight loss, which is a cost to society.

Example of negative externalities can be the damage to society due to the pollution caused by a firm, health conditions liked to passive smoking, health hazards to individuals caused by pesticides and non-organic farming.

An example of this can be the transfer of intellectual property from one firm to another. For instance, when an individual changes jobs, he may transfer the knowledge gained from his previous employer to the new firm. This means that the new firm did not pay the employee for this extra information, nor did they conduct R&D operations to find out this information, but the firm still receives this additional benefit.

Other examples of a positive externality would include education, the cost for which is incurred by an individual, but the educated masses of the society enjoy the benefits. An educated workforce is an asset to the entire society and not just to the individuals themselves. 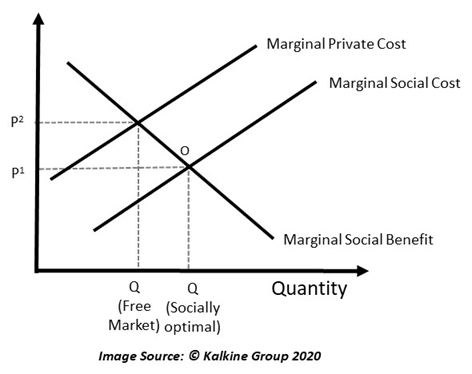 Here, Private Social Cost exceeds the Marginal Social Cost. In simple terms, this means that the firm is paying for the betterment of the society overall. Here, the Free market output is less than the socially optimal level of output, unlike the case of negative externality. Hence, there is underproduction in the society.

What are the implications of externalities?

How to resolve externalities?

Externalities can be overcome when they are internalised into a business. This can be achieved through appropriate government policies that would curb the spilling over of these effects onto third parties. Some of these measures include: