What is an Oil Spill?

An oil spill is the contamination of land, air, and water environments with the spill of crude oil or other oil distilled products such as gasoline, kerosene, jet fuels, diesel, hydraulic and lubricating oils. The environmental discharge of various organic compounds in crude oil or oil distillates leads to oil spill pollution, which harms living organisms, including human beings, aquatic animals, and other living beings that live on the Earth. Oil spills usually occur while extracting crude oil from the subsurface by drilling process or transportation through pipeline due to their breakdown. 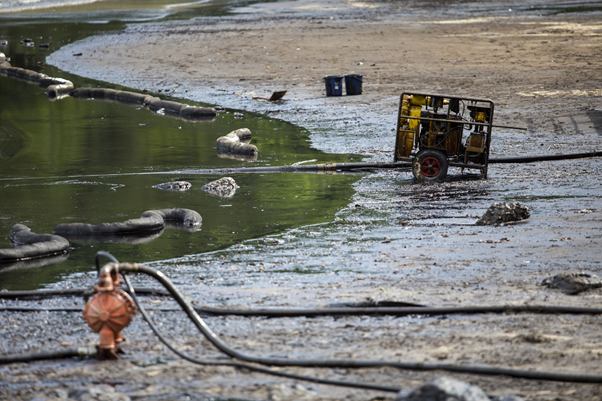 What are the major sources of Oil Spills?

Natural Causes: natural oil seepage is the leading natural cause of oil spills. Crude oil seeps from the subsurface reservoirs and enters the marine environment. Due to the density variation of the crude oil and being lighter, it tends to move upward. The oil tries to migrate and come towards the surface to remain in the lowest energy state. While migrating from the, if it gets a trap in the way it takes stop there otherwise, it travels up to the surface and starts seeping, contaminating water environment. These type of oil spills are usually seen in oceans.

Anthropogenic Causes: Anthropogenic causes of oil spill includes spills due to large human activities and accidental oil spills. Accidental oil spills may occur due to leakage of storage containers that are located above or under the ground. Spills may also take place during the handling and transportation of oil due to the rupture of transportation vessels. Routine maintenance activities such as ship cleaning, tool and equipment cleaning may also lead to oil spills. Accidental cases due to immediate failure of equipment can also become a reasonable cause for an oil spill.

Apart from this, intentional oil discharges like a discharge of oil originated by engine oils and burning of fossil fuels also cause oil spills due to the release of individual components of oil and oil products in the atmosphere.

How does the oil spill look?

The oil spill may have numerous types of environmental effects based on the place of occurrence.

If an oil spill took place in a marine environment, it would degrade relatively faster. Water is a good medium for emulsifying, dispersion and degradation. Oil gets accumulated at the surface of the water.

If an oil spill takes place on the land, it may eventually move in a downward direction to mix with natural groundwater. However, the movement can be checked by natural barriers like clay, paved surfaces etc.

If an oil spill took place in the underground storage units or underground pipelines, it would mix with natural groundwater by travelling vertically or through a permeable channel.

There are many ways by which an oil spill can impact marine life. Habitat destruction, poisonous ingestion and direct contact are the main reasons for the destruction of marine life by oil spills. Marine animals that swim through the slick can ingest oil through their gills. If any animal depends on any other animal for its food with poisonous ingestion, both will die. Ingestion of oil can cause various problems that may lead to animal's death or dangerous disease.

In most cases, oil spills kill all the organisms that come in direct contact with them. For example, the birds' feathers stick, oil also weights the birds resisting them from flying. Marine animals having furs are saturated by oil, ruining their capability to retain heat and causing their death. Dolphins and whales inhale oil which can affect their lungs. Many animals die due to the smothering effect created by the layer of oil at the water surface.

What are the methods for cleaning oil spills?

There are various methods of cleaning oil spills that have taken place in the seas. Let us try to understand them in brief: 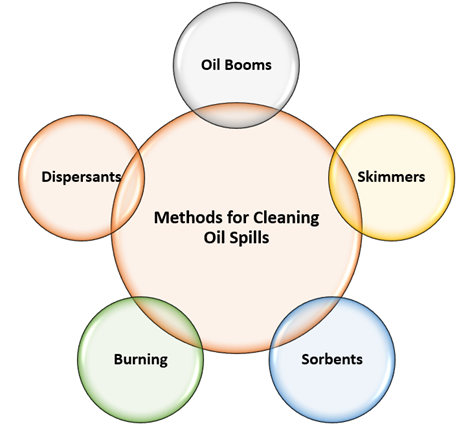 What are the largest oil spills that occurred in history?

There are several major oil spills that took place earlier. Let's take three of them into consideration: