What is the October Effect: a myth, or a reality?

October effect refers to the theory that stock prices crash in the month of October. This happens without any methodical reason or any specific factor affecting the stock prices. However, the theory has come into existence because of repeated crashes observed in October over the years.

October effect is more of a psychological concept than a real-stock market concept.  There have also been price crashes observed in September. However, the reasons for these crashes have been varied. 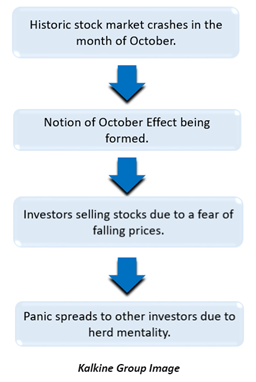 How does October Effect impact the markets?

The hysteria around the October effect might make investors scared in this month. The expectations of a price decrease might lead to many investors selling their stocks in early October. If too many investors end up selling stocks, that might inadvertently lead to more panic selling among the investors.

Why do investors believe in the October Effect?

Often investors let emotions get the best of them. People might lose out on their money because they let their emotions guide them, which may include fear, greed, or a herd mentality. Behavioural finance suggests that investors might be motivated by factors other than their rational decision making. 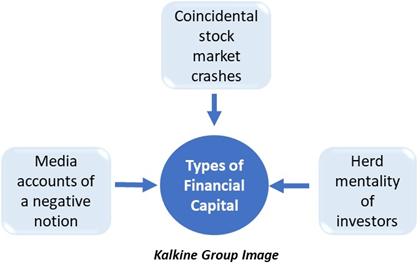 Some of the biggest crashes in history have happened because of the poor decision-making of the investors. People might follow a crowd and put their money in stocks which are more popular among investors, without having any other reason for doing it.

At times, the media accounts about the market and a general notion, which is framed without any rational explanation, end up misguiding investors into the wrong direction.

These factors may lead to investors giving in to the mass hysteria prevailing during October, which may end up fuelling the October Effect. Therefore, investors must consider all the factors before putting their money in a particular stock.

Why was the concept of October Effect formed?

The following historic incidents led to the phenomenon of stock prices crashing during October:

However, the bubble burst with reasons attributed to low wages, a downfall of the agricultural sector, and a multiplication of debt.

The computerised models used for trading were programmed to give a positive feedback. This led to the model generating increased buy orders when prices were increasing, and more sell orders when the prices began to fall. International tensions between countries also led to the crash and loss of confidence in the market.

All these factors occurred because of different reasons, which were specific to that particular time period and set-up. Thus, it can be argued that the fact that these events occurred in October is a coincidence.

Is the October Effect real or just a coincidence?

It is safe to say that October Effect is nothing more than a mere coincidence. The events discussed above happened without any methodical linkage connecting them to the month of October.

There has been further evidence proving that the October Effect failed to occur in the years when the market remained strong in this month. The historical crashes mentioned above occurred because of issues which had been specific to those times. Stock exchanges and trading platforms have incorporated the necessary changes to ensure that these events do not get repeated.

Regardless of these regulations, it is safe to say that some of these crashes were Black Swan events and could not have been predicted under any circumstances. Therefore, it is difficult to say whether the current market is immune to phenomena like the October Effect or any other crash.