What is Momentum trading?

Momentum trading is a type of a trend-following technical analysis trading strategy which believes in the rationale that primary trends are inviolate and tend to continue in its initial direction.

Momentum style traders or investors try to lock-in the advantage of an upward in any financial instrument that trades freely with a rationale underpinned by renowned Dow Theorist – Robert Rhea, i.e., the primary trend is inviolate.

Momentum traders primarily look at the freely traded financial instruments that are going up with successive periods, i.e., going up on a daily basis, weekly basis, or sometimes even on a monthly basis. Unlike objective traders, momentum traders rely largely on price-based momentum signals rather than mathematical-based technical indicators.

A typical momentum trader would first spot an uptrend and would take a confirmation of the uptrend by confirming the preceding price move in many timeframes.

While a lot of traders might become apprehensive about entering a trade at highs of the market and would wait for a potential correction before initiating any long or short position, momentum traders do not pay attention to the correction and rather focus on the price range near the top to enter the market.

As a lot of empirical evidence suggest that trendy markets seldom take correction, and momentum trading strategy tries to gauge the strength near the top on a belief that the primary trend would not change direction unless the trend losses strength.

However, one must pay attention to the nitty-gritty of such a trading strategy as market volatility indicators such as Implied Volatility are often at the peak near the top, which makes momentum-based trading strategies difficult for day traders and very short term traders.

One typical method to identify momentum in a freely traded financial instrument is to look at the percentage change in the underlying security near its 52-week high. Ideal momentum trades are often spotted within 10 per cent price range around the 52-week high.

Also, a typical momentum trader would also look for a price change over 12 to 24 weeks to spot a price trend. 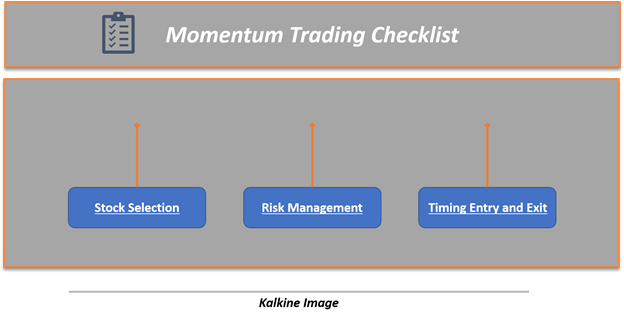 The stock selection is the most crucial part of momentum trading, for which one needs to identify best sectors quickly and accurately. Momentum traders typically choose stocks with high liquidity while staying clear of high leverage.

Post identifying best sectors, ideally one should determine stocks that are trading close to their 52-week highs or better life highs. At such points, gauging the strength of the stock becomes crucial to identify the probability of a correction or continuation of the upside rally.

Risk management is an integral part of momentum trading which must be addressed and acknowledged. As momentum traders typically buy a stock near their high, it is important for them to identify separate extremes with momentum.

An extreme usually resembles many attributes of a strong momentum; thus, it could become paramount to distinguish price extremes from momentum.

One typical distinction between a price extreme and a strong momentum is the presence of exhaustion gaps with spiked volume at the end of the rally in extreme movement. However, extreme market reactions over some headlines or price-sensitive information could also cause a stock to spike with some gaps with large volume.

To Know More, Do Read: Volume Analysis- How to Utilise the Secondary Tool To Generate Alpha?

Thus, it becomes crucial for momentum traders to understand the nitty-gritty of price gaps as in a strong momentum ideally only runaway and the breakaway gap should appear as compared to exhaustion gaps at extremes.

Timely entry and exit of a bad position or when the sign of reversal starts to appear is one of the most important factors to consider in momentum trading.

Apart from using the market breadth, many traders including momentum traders, use various volume- and price-based strength indications to gauge the strength of the rally and to decide when to exit a trade, i.e., when the trend loses strength.

By utilising the up and down volume data and forming an oscillator, that is a moving average of the ratio of one to another produces an excellent oscillator. Ideally, such a plotting might require a slight study of the past data to identify an optimal thrust point, above or below which market reacts sharply.

In a non-trendy market, ideally, such a ratio should be equal to 1, but that seldom happens, and a reading above 1 should be considered as a signal of upside momentum and vice versa.

However, volume thrust seldom would read one as it is not necessary that in consolidation, the level of up and down volume would be equal.

Thus, it becomes paramount to test the oscillator on the past data to identify optimal levels.

A large number of advancing stocks on a daily, weekly, or monthly basis is ideally a reflection of bullish sentiments, which psychologically attracts more public participation; and thus, act as a good time to adopt a momentum-based trading strategy.

Also, many momentum traders prefer to become more active in the market once they observe a particular number percentage of 52-week highs above the total issue on an exchange. Such time-selection criteria could be troublesome, but thanks to the advancement of computational power and technical analysis software, such a task now does not take too much of effort.

Growth investing strategy invariably tend to adopt one or the other parameter followed by a momentum trader. Few growth investors apply the same criteria or a modification to fundamental parameters, such as stocks reporting record revenue, record margins, profitability ratios etc. Businesses with moat tend to show characteristics of a momentum stock.

Traditional value investing follows a contrarian approach; thus value investors do not give too much heed to momentum-based strategies. Furthermore, usually momentum stocks tend to trade at have a valuation premium.