What is meant by LIBOR?

LIBOR is the acronym for London Inter-Bank Offer Rate and is the interest rate charged by banks in London from other financial institutions for short-term loans. It is a benchmark rate against which various other interest rates are set.

LIBOR is followed worldwide by banks as a benchmark rate. Commercial banks across all countries use LIBOR not as a tradeable rate of interest, rather as a mark-up over which they define their own rates. Banks may add an additional rate over LIBOR against the loans that they offer. 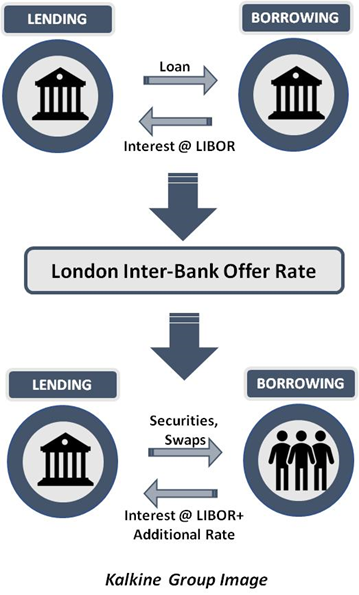 How does LIBOR work?

LIBOR is the interest rate that banks charge from each other against overnight loans. These loans can have maturity periods ranging from one day to one year, with a total of 7 different maturities available. The LIBOR is published each morning at 11 a.m., London time.

LIBOR is quoted in 5 different currencies for each of these maturity periods, these include: Swiss Franc(CHF), Euro(EUR), Pound Sterling(GBP), Japanese Yen(JPY), US Dollar(USD). LIBOR is used as the basis rate for asset-backed securities, adjustable-rate mortgages, municipal bonds, credit default swaps, student loans and other kinds of debt.

How is LIBOR set?

Before 2008-2012, LIBOR was known as BBA LIBOR, which refers to the British Bankers’ Association LIBOR. However, in February 2014, BBA LIBOR was changed to Intercontinental Exchange(ICE) LIBOR. This is when ICE took over the administration of LIBOR. This change led to the modifications to the currencies for which LIBOR is calculated.

LIBOR is calculated by taking an average of all the interest rates estimates offered by banks for these overnight inter-bank loans. Every day, 18 international banks submit an interest rate figure which they think would be the appropriate inter-bank rate for borrowing. The ICE Benchmark Administration removes the 4 highest and 4 lowest figures among these submissions and takes an average of the remaining figures rounded to five decimal places. The same is calculated for each currency individually.

The LIBOR is based purely on the estimates given by these banks and not on the actual lending rate that these banks pay for their borrowings. Thus, banks can easily manipulate LIBOR and set it lower than what they think the actual rate in the market is.

How was LIBOR linked to the 2008 financial crisis?

During the 2008 financial crisis, banks and lenders thought that LIBOR-based credit default swaps would protect them against the risky mortgage-backed securities. However, when subprime mortgages began to default, insurance companies could not honour these swaps.

Additionally, LIBOR is usually a few tenths of a point above the Fed funds rate. During April 2008 however, LIBOR increased to 2.9% even when the Fed dropped its rate to 2%. This led tobanks showing hostility regarding inter-bank borrowing which led to LIBOR rising to 4.8%, meaning a higher cost of borrowing. A high LIBOR consequently affected other financial products as well.

Thus, the crash in the financial industry was spread to the rest of the world through LIBOR rates. As the banks started estimating higher and higher interest rates, LIBOR increased making lending more expensive even when banks were reducing interest rates globally.

Are there any fallacies in the determination of LIBOR?

There were allegations that the banks involved in the LIBOR calculations formed an alliance to keep the LIBOR rates low. This was done in the interests of the traders who held positions in LIBOR based financial securities.

It is important to note that LIBOR is only an estimate of interest rates, which ultimately ends up affecting the real interest rates charged in the future. Thus, it gives an unfair advantage to rate-setting banks as they can manipulate the rate by forming an alliance.

The 2008 crisis was followed by intensive questioning of these rate setting banks regarding their LIBOR determination methods. Banks tried to keep the LIBOR estimates lower as it painted a relatively better image of them, pointing to lower risk of default. This investigation led to the shifting of the LIBOR administration from BBA to ICE.

However, slowly LIBOR is losing its touch in the market as banks continue to replace LIBOR with other benchmarks. It is still unclear whether ICE LIBOR would remain by the end of 2021 or not. The shift away from LIBOR makes it a less reliable benchmark for interest rates. Moreover, as there are not enough transactions happening between banks in certain currencies, it becomes more likely that LIBOR will phase out.

Some alternative benchmarks include Sterling Overnight Index Average (SONIA) and the USD LIBOR substitute called the Secured Overnight Financing Rate(SOFR). Both these benchmarks are picking up in global markets and might soon be more widely accepted than LIBOR. (SOURCE:

News Beyond Markets || Which Coronavirus Variant Is Behind The Latest Outbreak In Melbourne?

A Banking Stock Worth Looking for Despite the Devastation

Central Bankers: Deadline for Phasing Out LIBOR Would Not be Extended