The gig economy refers to a market structure where there is a greater number of temporary and flexible job contracts compared to permanent employment contracts. This type of economy relies on short-term labour rather than full-time workers who have fixed employment status and are less prone to change.

A gig economy sees heavy reliance on digital means to sustain itself. Most of the jobs that belong to the ‘gig’ sector depend on an online platform. In the modern age of the internet, the commonly seen gig jobs are those in Uber, Airbnb, or even courier deliveries. The availability of app-based business creation has enabled businesses that were once brick and mortar establishments to function remotely.

However, this does not limit the existence of gig jobs to online platforms. Contract-based hiring is observed in many other sectors as well, like the education sector, where teachers are hired on an ad-hoc basis.

FOR FURTHER COMPREHENSION: Understanding the Concept of Gig Economy

Previously called the ‘sharing economy’ or ‘collaborative economy’, the gig economy derives its name from the meaning of the word ‘gig’ which translates to a job or event that lasts a specific amount of time. This is used mostly to be musicians or stage performers to refer to their acts. In a similar fashion, the gig economy translates to an economy mainly running on temporarily employed labour.

Since most gig jobs are observed in the digital sphere, many people prefer to use the word “platform economy” too.

How is the gig economy beneficial? 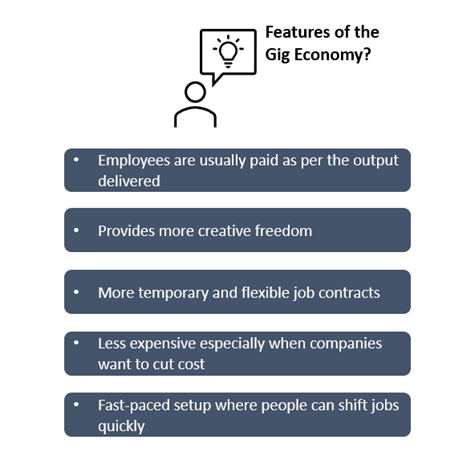 Short term, flexible contracts allow companies to run more efficiently as it is a pay-per-job kind of a setup. The gig set up focuses on the output delivered rather than the hours put in. Unlike a typical office set up, where employees are salaried based on their work shifts, a gig job allows the flexibility to the employer to pay the employee depending on the output delivered by the latter.

On the employees’ side, gig jobs allow them to explore a more flexible form of work setup. With more relaxed job rules, workers enjoy a better and more defined work-life balance under a gig economy. Moreover, full-time employers own exclusive rights to the work and offer less creative freedom to the workers. The situation is not the same in case of the gig economy, thus leading to a better experience for the employed workers as well. Gig setup could be beneficial at a time when companies are trying to cut down on costs and save up on salaries.

Moreover, a gig economy paves the way for a fast-paced setup where people can shift jobs quickly. This resonates well with the priorities seen currently among the working class as people are rapidly switching jobs and are constantly on the lookout for new skills to acquire. But full-time employment is still more liked as workers see their rights and intellectual property secured, they would want to contribute more and stay engaged with the employer.

What are the challenges under a gig economy?

Most businesses do not see gig type setup in the long run. But things are changing for job markets globally as more and more jobs are becoming gig-based and are adopting an online platform. However, the long run sustainability of such employment is still ambiguous.

Thus, even with a good skill set and formal training, employees might see delayed assignment of work, irregular salaries, and lesser employee benefits under a gig economy.

Can a gig economy setup be a good idea in the long run?

Contract-based hiring can be beneficial under stressful times when cost saving is on the company’s agenda. Under the scenario of a pandemic, when major businesses are hit due to lesser demand, a gig-based job setup can provide the extra edge to companies. Alternatively, on the employee’s side, rising health concerns might make the prospect of remote or digitally functioning jobs more appealing in the scenario of a pandemic.

However, in the long run, the cost-efficiency might wear out with concerns regarding workers’ rights and benefits. If the labour employed is not satisfied with the job setup and does not feel a sense of security, then the job loses its appeal. Thus, it is important to offer financial security as well as intellectual rights security to the workers.

While a temporary job structure allows for creative freedom, its high dependency on online platforms makes it reach limited to a select set of individuals who have access to technology. In case companies do not have a brick and mortar establishment, they may lose out on customers who do no prefer online methods or who do not have access to them.

The future may see an upward streak in terms of gig-based hiring as companies evolve and change norms. It is imperative, however, to maintain more traditional, offline methods alongside the short-term roles offered by companies of the modern world.

Auckland International (NZX:AIA): How would it perform in its interim results?

Why is crypto market down? 5 key reasons