Understanding The Concept of Gig Economy

Many countries are earning huge profits by offering part-time or temporary jobs to individuals seeking for job opportunities. Part-time jobs enable firms to get efficient services at a lower cost, while workers get flexible and independent jobs giving a boost to their income. The economy where part-time jobs are a commonplace is referred to as ?gig economy?. Let us understand this concept in some detail below:

A free market system where companies tend to hire workers for short-term engagements is generally termed as a gig economy. The labor force in such economies comprises of project-based workers, freelancers, temporary or part-time hires and independent contractors. The gig economy usually connects clients and customers via an online platform.

Such economies are made up of the following three participants: 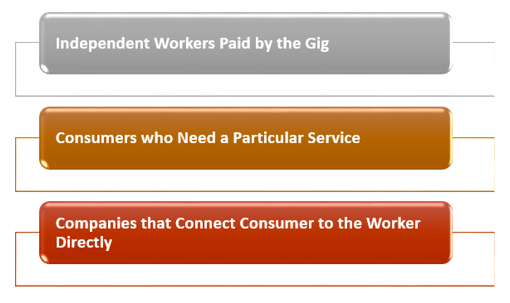 Let us understand these three components through an example. Suppose, Uber needs an individual to drop a customer to a specific destination, who will be paid for this particular task. In this case, the independent worker is the ?individual? that will perform the task, the ?customer? that requires the service is the consumer and the company connecting the two is ?Uber?.

Working of a Gig Economy

Although gig workers are scattered across different occupation groups and could not be easily identified in employment surveys, they earn money in a similar way as traditional workers. Individually, the income earned by a gig worker represents a small portion; however, when we aggregate the earnings from different gigs, their cumulative returns can be identical to that of workers working full-time.

The gig workers are not eligible for the typical benefits offered to full-time workers and are usually responsible for paying their own taxes. Yet, these gig workers can take advantage of the tax benefits, involving tax discounts for non-reimbursed operating costs.

Employers hold an upper hand in the gig economy than the freelancing gig workers. This is so because they are able to quickly find and contract the required personnel without any extra expenditure like training, office space and benefits. Besides getting a wide choice of applicants, they are not under any pressure to hire individuals?based on their proximity. In cases when employers are not able to hire full-time employees to get their tasks done due to budget constraint, gig workers provide an added advantage.

Not only employers, but the gig economy has also made it easier for employees to earn while sitting at home without the need to travel long distances for work. The workers get an enormous variety of options to choose from and can select the work based on their family schedules and demands. Besides flexibility, gig workers get independence after completing their respective task or assignment.

The daily schedule is not hampered by traditional office interruptions like progress reviews and staff meetings. They get the most independence to perform their tasks at their desired time and place. Many individuals also believe that gig works are more interesting than traditional jobs due to a huge variety of tasks, eliminating the dull-day scenario.

Although employers gain more from gig work than regular employees, the dynamic nature of the gig economy poses a danger to the long-term relationships between clients, workers, vendors and employers. So, it can eradicate the benefits that flow from familiarity with clients and employers, customary practice and building long-term trust. Also, the market risk that has been traditionally borne by capitalist business owners gets transferred to the workers.

The trend of the gig economy makes it difficult for gig workers to grow fully in their careers relative to full-time employees. Also, they are paid very less for a single gig due to which they have to look for multiple gigs to earn a significant income.

Besides, the gig workers get very limited benefit package relative to full-time workers, usually with no sort of health or retirement benefits. Such workers are also not legally categorised as employees, so they have to pay taxes on their own. Besides all these disadvantages, the major drawback is to constantly keep looking for the next gig.

In the United States, the gig economy has grown rapidly in size and importance in the last few years. The rise of the gig economy is supported by the launch of several gig economy applications in the country, along with a growth in the number of individuals seeking part-time jobs.

According to the International Labor Organization, it is difficult to estimate the actual number of gig workers due to the reluctance by many businesses to disclose the data. However, in 2017, the Bureau of Labor Statistics reported that about 34 per cent of the US workforce (55 million individuals) in the US are gig workers and the percentage is likely to increase to 43 per cent in 2020

The most prominent factor that is driving growth of the gig economy is the technology that allows individuals and workers to work together from remote locations. Considering this, let us take a look at some of the leading global gig apps that are offering opportunities to multiple individuals:

Amazon Flex provides delivery opportunities to people of age 21 and above, enabling them to pick up parcels from the company?s delivery station and deliver it to the customers as per the individual?s schedule. The drivers can earn between $18 to $25 per hour by delivering packages.

Wag is another great app that allows you to book a dog walker as per your required time. The app was launched in 2015 and has become one of the best dog walker apps now.

With Instacart, individuals can pick-up and deliver food to customers who are not able to do so for any reason. Most of the US households can shop for groceries through their Instacart app that has multiple retail partners.

Turo is a car sharing application which helps travelers rent their car and earn money. The private car owners can easily rent their cars via mobile and an online interface.

A famous name among the transportation industry, Uber offers an opportunity to earn as much as you want by providing driving service.

One can use one?s creativity in a great way to earn money through Fiverr. The application welcomes individuals with skills like photography, writing, editing, translation skills, etc.

Handy is another great gig economy application for home cleaners and handymen. The application is accessible to multiple cities across Canada, North America and the UK.

.It can be inferred that though the employees face more cons than pros from gig works, the trend of gigs is increasing across the world. The gig economy is revamping careers for the present and next generations, offering substantial opportunities to job seekers.