What are Future Contracts?

Forwards contracts, being OTC, are not as secure as futures contracts and are most susceptible to counter party default. They are non-standardised and are mostly confidential and known by the people involved in the contract. They can also be used for hedging.

Since they are non-standardised, forward contracts can be customised in terms of quantity, delivery date and the kind of commodity needed. Through mutual understanding between the buyer and seller, it is possible to achieve customisation.

What are some features of a forward contract?

Forward contracts are designed to fit the requirements of both parties; thus, each contract is unique and illiquid. Most forwards contracts have physical delivery at expiry; however, they can sometimes be cash settled as well. There is a high chance that either party might break out of the contract.

Any change or cancellations that may happen are only done mutually and not by any party individually.

What are some of the differences between a futures contract and a forward contract? 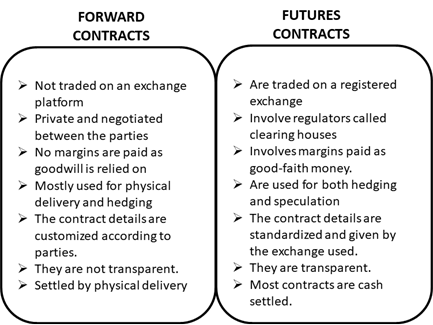 Although futures and forward contract is very similar, they have some fundamental differences, as shown in the table.

How do forward contracts work?

Suppose a farmer expects his potato produce to be fully harvested in 2 months. But he expects the prices of potatoes to fall as there might be more supply of potatoes than there are consumers. At the same time, a local restaurant is opening up in two months time and requires potatoes in bulk. Since the restaurant is unable to find a potato contract on any exchange that would fit their requirements, they can get into a private arrangement with the farmer. This arrangement is called a forward contract because:

What are some other examples of OTC contracts?

Apart from forward contracts, another example of an OTC contract can be swaps. In layman’s language, a swap can simply be understood as an exchange or barter. It is a mutual agreement between two parties where they agree to exchange their obligations; however, this is done in an unregulated environment. The entire system is carried out through a private agreement between the two parties.

There are two types of swaps:

Thus, if they come to a mutual agreement, both company A and B can fulfil each other’s requirements. This can happen through an interest rate swap. 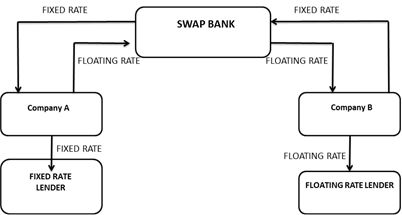 and convenient. Continuing the above example, if they come to a mutual agreement, it can be beneficial for both to undertake that currency swap.

Thus, this is a case of currency swap as the difference in loans is arising because of different currencies. The important thing to note here is that both parties need to be weary of the exchange rate between the two currencies.