What is Fama and French Three factor Model?

The Fama and French model was created as an extension to the existing CAPM model by Kenneth French and Eugene Fama, who were professors at the University of Chicago. The model describes the expected return on the market portfolio by assessing three risk factors, that is, the beta (also known as market exposure), Small Minus big and High Minus Low.

The model is dependent upon the rationale that small cap companies and high value companies tend to outperform the overall market.

Earlier, the factors used in the model were only applicable in four countries, namely, Canada, Japan, the US, and the UK. After making adjustment in the factors, the model application was extended to the regions of Asia Pacific countries and Europe.

What are the three factors in the Fama and French model? 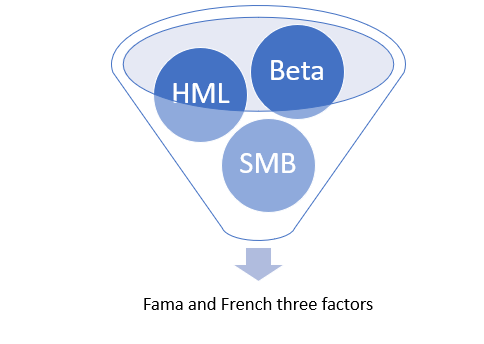 What is the Fama and French three factor model’s formula?

The Fama and French three factor model can be represented mathematically –

SMB – Small minus big is the effect that is affected by the market capitalization of a company. SMB determines the excess of small-cap over the large companies from the historical data. After ascertaining the SMB, the beta coefficient can also be calculated by employing linear regression. The value of the beta coefficient can be both positive and negative. This factor has been included in the three factor model because small-cap companies can generate a higher return in comparison to large-cap companies.

What is the importance of the Fama and French three factor model?

The Fama and French three factor model is an extension of the CAPM (Capital Asset Pricing Model). The CPAM model only considers the beta factor, and in the Fama and French model, two more risk factors have been added to allow flexibility in the model. The adjustments have been made to outperform the tendencies.

The model assumes that the small-cap companies generally outperform the large companies in the long run and the companies with higher value outperform the growing companies. As per the research by Fama and French, the model is feasible in explaining 90% of the portfolio diversification. Another assumption is that riskier investments are associated with higher returns.

Where is the Fama and French three factor model applied?

The Fama and French factor model can be utilized to understand portfolio performance. Due to added flexibility, the model has gained significant attention in comparison to the CAPM. The model is accepted by many investors as it helps in explaining the investors return and the stock price movement. Unlike the CAPM model, the returns are calculated by considering three separate risks, that is, market risk, the value related of the risk and the book to market aspect.

What is the history of the Fama and French Model?

The studies discovered that the stock returns can be easily and clearly explained by creating portfolios that are based on the market capitalization size and the value growth measure.

A different approach was introduced to explain the returns. However, the assumption that the stock is priced rationally acts as a limitation. Moreover, the model accepts its limitation in the context of the value factor as it arises due to measuring errors.

What is the five-factor, Fama and French Model?

The three-factor model has been expanded and other factors have been included recently. The factors are momentum, low volatility, and quality. Keeping the existing factors constant, the model made an addition stating that the companies projecting a high amount of future earnings will see higher stock market returns. This concept was termed as ‘profitability’. The other factor is ‘investment’, which states that the companies who are investing in large projects will experience a decline in the stock market.