Dead Cat bounce is a colloquial phrase which is quite popular in the financial markets. The term was coined a long time ago and generally referred to the peculiar behaviour of the price. The phrase denotes a recovery in the asset’s price, often a sharp one after a prolonged downtrend.

Sometimes it is also referred to a short but sharp fall, succeeded by an equally sharp recovery. 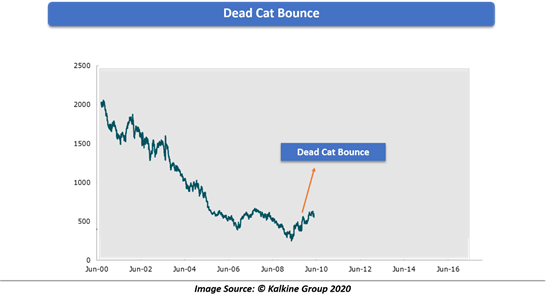 How does a downtrend continue for a long time?

Quite often, some securities in the financial markets depict a very long downtrend which may last from a few months to a few years depending on the severity of the fundamental headwinds. These prolonged downtrends are so strong that no support levels can withhold the downtrend and the prices keep on falling.

Every support level gets taken out by excessive selling, which pushes the prices even lower. These lower prices force the long holders to liquidate their positions as no visible halt in the downtrend is noticed. This liquidation from existing buyers further fuels the selling, leading to the continuation of the downtrend.

As the price keeps on falling, the buyers do not get enough confidence to buy and consequently keep getting overpowered by selling pressure continues the downtrend.

So what is the ideology behind “Dead Cat Bounce”?

In due course of a downtrend, the security tends to become oversold for the time being. Oversold is a technical term is used for security which seems to have fallen quite a bit in a specified period.

In other words, a security that has been continually sold in a specified period tends to reach a level wherein the sellers are no more interested in selling at further lower rates. This is where the buyers’ step in and try to buy these stocks at low prices, leading to an increase in demand over the supply.

This fresh buying tends to push the price up hence resulting in a short upside movement or, in technical parlance a “Bounce”.

This point is where the downtrend witnesses a temporary upside momentum which is exactly quoted as a “Dead Cat Bounce”. The ideology is “Even a dead cat will bounce if fallen from a great height.” Likewise, a short bounce is quite expected after a prolonged downtrend which does not change the trend as a bounce does not mean the cat has become alive. 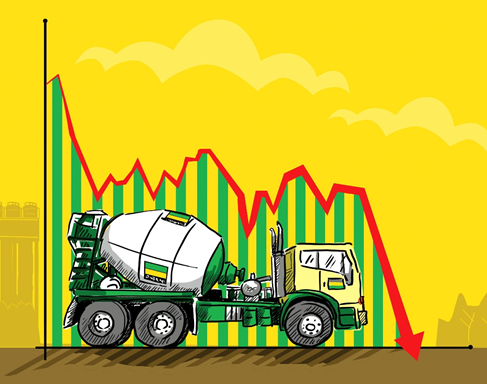 Does it signify a reversal from a downtrend?

A Dead Cat bounce is an upside momentum, witnessed after a prolonged downward trend, generally near the oversold price region. But it is to be noted that this price bounce is merely a reaction of the downtrend which is often witnessed in the oversold areas.

This does not change the entire trend, and more often than not, the trend continues in the primary direction after the bounce fizzles out.

Why is it difficult to trade a Dead Cat Bounce?

Most of the time it is difficult to trade a move like a Dead Cat Bounce as the bounce is often very quick and short-lived. The overall trend remains negative, which is in contradictory to the short-term bounce. Also, few investors mistake it for the trend change, which often proves to be a mistake.

It generally becomes difficult to estimate some key support areas from where the bounce may occur as the downtrend is quite strong and lacks demand to support the price. However, there are some momentum indicators like RSI (Relative Strength Index), Stochastics oscillator etc. which may help to gauge oversold zones from where the bounce may occur.

What are the reasons for a Dead Cat Bounce?

There could be many reasons for a Dead Cat Bounce to occur on the charts as the sudden demand may come due to numerous reasons. Some of the reasons are

As discussed, due to a prolonged downtrend and continued selling the price often comes to a level wherein the sellers are no more interested in selling at these lower prices and at the same time buyers often find a value proposition. This leads to a spike in demand, which ultimately results in a Dead Cat Bounce.

There are some levels of support on the price chart that are quite prominent. In other words, there are some regions of support which are quite strong and may remain relevant for years. These support levels are generally hard to break at the first attempt, which results in a bounce or a complete reversal.

How to profit from a Dead Cat Bounce

There are two different strategies when it comes to trading these kinds of sharp and against the trend moves. They are contradictory to each other, but both are based on proven price behaviour.

As the primary trend of the underlying is still downward, one thought arises to go short on the bounce. This strategy one to participate in the downtrend but with a much better price.

If these rallies are met with a resistance level like a falling trendline, horizontal price resistance etc. then these areas are ideal to sell the bounce in a downtrend.

Another opinion arises, why not to participate in the bounce? This strategy can also be fruitful provided the bounce should be stronger and last for a while, which is not always the case. This essentially calls for a very quick decision making while capitalising on the temporary bounce.

A Dead Cat Bounce is a prolonged downtrend followed by a short-term bounce. These bounces generally don’t last long, and once they fade, the trend continues towards the south.

However, sometimes a bounce may also act as a reversal, but for the added confirmation a trader should also look at other signals of a reversal like bullish divergence at the bottom or a double bottom chart pattern.

How real are Coinbase’s bankruptcy rumours?

Is the crypto market dead? Here's what you must know as an investor

Shibnobi crypto down over 50%: Is it scam?