What is capital gains tax?

Capital gains tax is the tax imposed on the growth in the value of investments incurred during the sale of those investments. The term “capital gains” refers to the profit received through the sale of a capital asset. The profit thus received comes under the income category, which must be taxed.

The entire value that is obtained upon the sale of an asset is taxable income. The transfer of a capital good in the current year is taxed in the following year. However, this tax is only applicable when the property transfer does not come under inheritance or bequest. Additionally, gifts are also not included as taxable assets. This is so because both inheritance and gifts are exempted from being classified as income.

Items that can be considered as taxable assets include buildings, jewelry, land, mutual funds and many more. Additionally, legal rights or the rights of management over a company are both considered as capital assets. 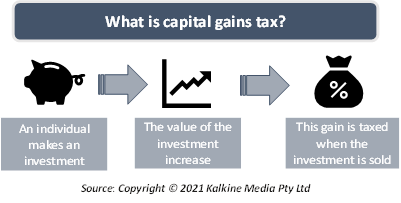 Despite any gains earned by the owner on his assets, the capital gains tax only becomes due once the asset is sold. This means that an if a property holder sees a gain in the rate of the property held by him, he would not be taxed for the gain until he sells the property to someone.

How does capital gains tax work?

Any asset that generated revenue when held for less than a year must come under the tag of ‘income’. The gains on such an asset are considered a part of earned income or ordinary income. The tax rate on the short-term gains is the same as that on regular earnings. However, in the case when the capital gains push the owner into a higher marginal tax bracket then the tax rate may differ from that on regular earnings.

Similarly, dividends received may also be taxed, not as capital gains but due to the profit attached to them. However, for long term capital gains there are no universal rates that apply. Instead, capital gains tax is decided based on a rate schedule which is derived from the income thresholds.

What are the types of capital gains?

Depending on the time duration for which the assets are held with the owner before they are sold, capital gains can be divided into short-term and long-term gains. Both are charged separately and can be better explained as follows:

The only time short-term capital gains would be taxed higher than the ordinary income is when these gains make the asset owner fall into a different tax bracket altogether.

What is meant by capital losses?

Instead of reporting gains, capital loss can be declared by taxpayers when their net long-term gain is lower than their net short-term loss. Losses can be declared on financial assets like mutual funds, stocks or bonds and hard assets that were not held by them for personal use.

The losses can also be used to offset other income such as wages, provided a certain limit is met.

How is capital gains tax calculated?

Finally finding out the net short-term gain or less is the next step. Similarly, the net long-term gain or loss is found it by netting the gains against losses. These two figures are then added, along with appropriate sign next to them. For instance, if there are net short-term losses and net long term gains then the losses would have a negative sign and would thus, be deducted from the gains.

The final value thus derived is reported on the tax return. A capital gains tax calculator can be used to find out what the tax would be for a particular individual.

How do capital gains taxes affect the economy?

The top 1% income holders are the ones who contribute most of the total capital gains in an economy. Remaining low- and medium-income people are compelled to keep their assets in tax-deferred accounts like IRAs. Thus, the high-income groups end up obtaining tax benefits.

The long-term capital gain holder does not have to pay more than 20% in taxes, and this applies to those investors who gain all income solely through their investments.

Thus, individuals who are living off investment income fall in the lower tax bracket. However, they do not need this lower tax as they already fall in the high-income group. Thus, a situation of increased inequality arises from this.

ASX off to a positive start; Adbri, Novonix lead gains