Capital Adequacy Ratio is a bank’s level of capital for its inherent risks, and capital under the requirement serves a loss-absorbing purpose for banks. It is stated as a percentage of an institution’s risk-weighted assets.

Capital of a bank is segregated into two parts, namely Tier 1 and Tier 2 Capital. Both the tiers are intended to save the bank in the event of a crisis, which may lead to a threat to the bank’s going concern. However, each tier of capital has its purpose when a bank incurs losses or risks to the going concern increases.

To calculate CAR for an institution, the sum of Tier 1 and Tier 2 capital of the banks is divided by risk-weighted assets.

Tier 1 capital consists of Common Equity Tier 1 (CET1) and Additional Tier 1 Capital (AT1). Under Basel III, the Basel Committee requires banks to have over 4.5% CET1 capital, and after including AT1, the level of Tier 1 Capital should be over 6%.

Also, the sum of capital instruments held by banks, including Tier 1 and Tier 2 capital should be minimum 8%. AT1 capital of the institutions could include perpetual contingent convertible instruments, but CET1 capital is pure common equity.

Money has sometimes been mankind’s problem. In the Great Depression of the 1930s, there was a dramatic imbalance between fiscal policy and monetary policy, reflecting the inability of policymakers to strike a balance since interest-rates were raised at the outset of an economic crisis.

This was also partly responsible for the development of Keynesian Economics, which laid the foundations for monetary policy.

Capital Adequacy Ratio is administered by the banking regulator in a country, which could be the Central Bank, like in the US or a separate body like the Australian Prudential Regulation Authority (APRA) in Australia.

The growing internationalisation of banks led to the creation of Committee on Banking Regulation and Supervisory Practices in 1974. Also known as Basel Committee, it was headquartered in Basel at the Bank for International Settlements.

After the failure of Bankhaus Herstatt in West Germany, the Basel Committee was formed to oversee the international supervisory standards, improve resilience in the financial system worldwide, and to co-operate on banking supervision with member nations.

It was the time when global policy thinktanks stressed on the need for capital reserves; commercial banks held a large amount of capital invested in Latin American bonds, which were then presented with looming risks of default.

The Basel Committee was concerned with the deteriorating capital ratios of international banks, resulting in the need for measurement of capital adequacy and abolishment of erosion of capital standards. Now banks started measuring capital adequacy based on weighted risks, including on and off-balance sheet risks.

How Is the Origin And Evolution Of Basel Accord Mapped?

In July 1988, the G10 Governors approved Basel I, which required banks to maintain a minimum ratio of capital to risk-weighted assets of 8%. Banks were given until 1992 to implement Basel I Accord, which was also adopted by members outside the Committee.

Additional amendments to Basel I continued until the proposal of Basel II, which was a new capital framework. The new accord led to a revised capital framework in 2004. It sought to develop and expand the rules for minimum capital requirements enacted in 1988.

Basel II also focused on the supervision of capital adequacy and internal assessment process by institutions, and disclosure requirements to bolster ethical practices and market discipline. As a result of financial innovation, there was a need for a framework to better reflect the underlying risks.

It also set the tone for continued improvement in efficiency of risk measurement and control. But the Committee realised the need of further improving capital framework before the collapse of Lehmann Brothers in 2008.

The Global Financial Crisis during 2007-09 reinforced the need for an improved capital framework in the wake of the banking crisis. Initially, the Committee released guidelines on liquidity risk management in the month when Lehmann Brothers failed.

During the same year, Basel III was endorsed by the Committee, which has amended the accord several times since 2010, including implementation dates. This accord included a range of areas for efficient risk management and control in the banking system. 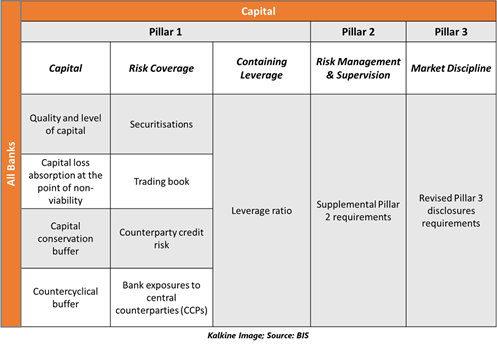 Over the past years, the banking regulations in Australia galloped forward in contrast to the global developments. Financial System Inquiry 2014, under the leadership of David Murray AO, also recommended increasing the bank’s capital requirements to over 10%. As a result of these recommendations, the banks now have large capital reserves in Australia.

In the wake of COVID-19, the implementation of Basel III standards has been further postponed to one year later to 1 January 2023. It was understood that the deferral of implementation would provide the banking sector the necessary capacity in response to COVID-19 economic deterioration.

In addition to meeting the Basel III requirements, global systemically important financial institutions (SIFIs) must have higher loss absorbency capacity to reflect the greater risks that they pose to the financial system. The Committee has developed a methodology that includes both quantitative indicators and qualitative elements to identify global systemically important banks (SIBs). The additional loss absorbency requirements are to be met with a progressive Common Equity Tier 1 (CET1) capital requirement ranging from 1% to 2.5%, depending on a bank’s systemic importance.

Why Transurban's (ASX:TCL) share price would be in focus today