Annuity, a contract meant for long term duration, is issued & sold by a life insurance company. The insurance company makes the payment in a fixed stream to retirees upon annuitization, which is generally an income to the latter. The annuities are designed to underpin the growth of retirement income and are funded by individuals.

In case of a deferred annuity, where payments begin after a certain duration, there is an accumulation phase which is the time period when an annuity is being accumulated before the fund payouts to the individuals begin. When the payments start, the contract is said to have entered an annuitization phase.

In case of an immediate annuity, payments begin immediately in the annuitization phase, and there is no accumulation phase.

The life insurance company after accumulating funds from individuals generally invests in mutual funds to get profit from their investments.

As a part of retirement income planning, the annuities are relied upon to get a regular income through a steady cash flow in the retirement phase.

The investors can take the payments either as a lump-sum amount or get paid periodically. The payment to the annuitant is done either for a fixed period or for the annuitant's remaining lifetime.

On the other hand, making the corpus of fund for retirement is not easy, as one has to find out how much an individual needs to save to retire. This is where the real financial planning begins. There are a number of retirement savings options available to an individual, tailored to specific needs. For example, investment can be made through the employer in the form of an annuity or super funds or pension plan.

While both annuities and pension are common sources of retirement income, it is important to understand the difference between the two.

Though annuities are purchased from insurance companies via the signing of the contract, the pension is generally a kind of retirement account offered by companies to their employees.

Individuals buy an annuity scheme from life insurance companies to get a guaranteed regular/lump sum income after retirement, whereas people save from the amount earned to make a pension pot throughout the life when they are earning.

While pension benefits are availed post the retirement, financial benefits of annuities do not necessarily require the person to retire.

ALSO READ: Retire from Work, Not From Life: Superannuation And Age Pension

While both annuities and insurance plans are essential components of long-term financial planning, some differences between the two deserve closer attention. Notably, annuities can be purchased without a medical need, unlike insurance.

Looking a payment flows, annuities dole out funds to the owner when the annuitization period begins as per the contract. While, insurance schemes provide income streams to dependent in case of the owner’s death, unless the policy is surrendered.

There are various types of annuities, and the exact payment structure of each individual will depend upon the terms that the individual had agreed with the insurance company.

Annuities can be structured into different kinds of instruments, that includes fixed, variable & indexed with the options of immediate or deferred income, that gives the investors flexibility to get their payments as annuities in different forms. 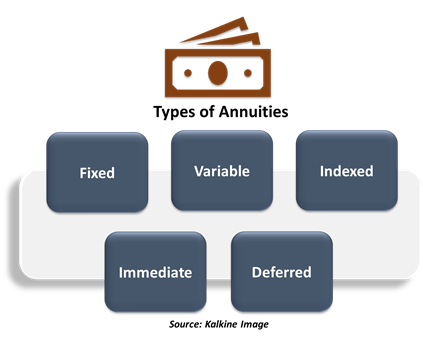 Fixed annuity provides the guarantee of a minimum rate of interest on the money invested by an individual and also offers a fixed number of payments that will be received from the insurance company.

Variable annuity gives the individuals an option to invest the money in different types of securities as the mutual funds do. The payments an individual will receive in the form of annuities will depend on the performance of the funds.

Indexed annuity combines the benefits of both fixed and variable products. The returns on investment an individual will get from an indexed annuity are not dependent on individual’s investment decision but will depend on the performance of stock market indices like the S&P 500, where the fund manager invests in the stocks of the index in the same weightage.

In a deferred annuity, the individuals pay a lump sum or a series of payments but will not start getting payouts as annuities until a specified period. This gives the individual’s money an opportunity to perform and either earn interest or appreciate, as for a variable annuity.

An annuity is considered to be a good option as it offers regular payments, tax benefits and a potential death benefit. The most basic feature of an annuity is the individual gets an opportunity to tap regular payments in the form of supplemental income from an insurance company during the retirement. This will help the individuals that have not saved enough to cover their normal expenses.

Meanwhile, there is a certain level of risk involved when individuals invest their money. The individuals get fixed annuities guarantee on a certain percentage of the individual’s principal (original) investment, which is generally quite low.

Besides, the annuities have illiquid nature. Once the individual has contributed the money to fund an annuity, he cannot get it back or even pass it on to a beneficiary. It could only be possible if the individual has opted for another annuity plan, however, this could involve fees attached to it. Further, the benefits will disappear when an individual die.

Besides, annuities generally involve high fees like administrative fees, mortality and expense fees associated with annuities, which makes the annuity products among the most expensive investment products available in the market. Insurance companies charge these fees, in order to cover the costs and risks of insuring the individual’s money.

A death benefit is a payment made by the insurance company to a beneficiary when an individual who invests principally dies. The death benefit for a basic variable annuity is generally equal to the amount that the individual had contributed to the annuity. It will not depend upon the performance of the securities of the annuity’s fund.

The annuity contracts have surrender charges which apply to both variable and fixed annuities. Surrender fees are generally high and require to be given for an extended period of time.

A surrender charge is incurred when an individual goes for more withdrawals than actually allotted. The insurance company has the power to limit withdrawals primarily during the early years of the contract.

Some annuities also have additional riders attached that are availed by giving an extra fee. A rider provides a guarantee which is optional. For instance, adding death benefits to an individual’s contract requires a death benefit rider. Rider fees will vary across individuals, but they can be of higher costs (up to 50% of the value of the in account).

Moreover, the deposits into annuity contracts are generally locked up for a certain duration, which is known as the surrender period. The annuitant would incur a penalty if all or part of that money within this period gets touched.

Why ending Triple lock state pension could be damaging

How soaring inflation would affect pensioners

How Macquarie (ASX:MQG) managed to double its first half profit

What is variable annuity?

Are you saving enough? Here’s how to build a retirement fund

Where is the safest place to put your retirement money?

These 5 TSX undervalued dividend-paying stocks can be a steal