Many investors are interested in investing their moolah in value stocks which enable them to earn higher returns if there’s an investment strategy in place. Such stocks are priced low at the moment corresponding to their intrinsic value due to temporary nuisance in the stock market, relevant sectors or industries, or any other disturbing news, etc.

These undervalued stocks which have strong fundamentals are likely to overcome the adversity of the market situations and may offer good returns and stability to investors at the time of market recovery or in the long run.

On that front, let us discuss some of the value stocks listed on the Toronto Stock Exchange (TSX). 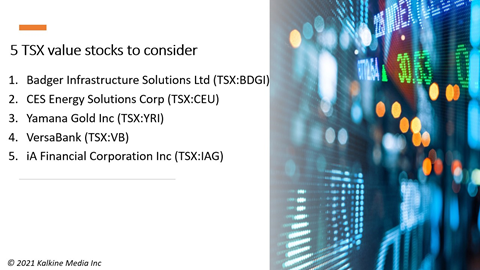 The North American hydro excavation service firm Badger Infrastructure Solutions witnessed its scrip wrapping up at C$ 36.03 apiece on Tuesday, October 12, down by 0.853 per cent. At this closing price, its scrip was priced roughly 23 per cent below the 52-week high of C$ 46.58 reached on March 23.

The outbreak of the COVID-19 severely impacted the construction businesses, likewise, BDGI also noted a fall of almost seven per cent in the past year. Its scrip tumbled by nearly 13 per cent in the last six months and was down by more than five per cent on a year-to-date (YTD) basis.

However, the Calgary headquartered hydro excavation firm appears to be recovering from the pandemic’s setbacks with roughly nine per cent growth in the past three months and climbed almost eight per cent in the last month.

BDGI, in its latest quarter, posted a revenue of C$ 135.6 million up from that of C$ 134.5 million in Q2 2020. After normalizing the foreign exchange effects, the firm recorded an 11 per cent year-over-year (YoY) growth in its revenue.

With the recovery in the pandemic and market situations, Badger expects to match its operating expenses with its revenue in order to exploit long-term opportunities and capture the non-destructive excavation market across North America.

The Canadian consumable chemicals provider CES Energy Solutions Corp noted its stock closing at C$ 2.10 apiece on October 12, up by 0.96 per cent. Its stock scored its 52-week high of C$ 2.13 on Friday, October 8, which is more than one per cent above the mentioned closing price. 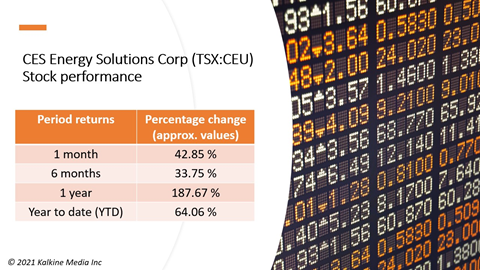 Its stock rocketed by nearly 188 per cent in the past year and soared about 64 per cent on a YTD basis. In the last one month, its stock jumped by almost 43 per cent.

CES reported a YoY rise of 59 per cent in its total revenue to C$ 253.6 million in the second quarter of 2021. It noted a net income of C$6.7 million in the latest quarter, up from that of net loss of C$ 24.9 million incurred in the same quarter a year ago.

CSE is expected to pay a quarterly dividend of C$ 0.016 to its shareholders on Friday, October 15.

The Toronto-based miner’s stock plummeted by about 36 per cent in the past year and slipped by almost 29 per cent on a YTD basis. In the last three months, it slumped roughly eleven per cent. However, it seems to be on the rise as it jumped up by more than four per cent in the last week.

Yamana recorded adjusted net earnings of C$ 70.7 million and net cash flows from operating activities of C$ 153.5 million, in the second quarter of 2021.

The company announced that it will be releasing the operation and financial results for the third quarter of 2021 after the market close on October 28.

The Quebec headquartered life and health insurer iA Financial Corporation witnessed its stock priced at C$ 72.65 apiece, at market close October 12, up by 0.069 per cent. Its stock surged almost 53 per cent in the past year and increased more than nine per cent in the last three months.

Many companies with sound fundamentals are expected to withstand tough market situations and enable investors to fetch higher profits.

However, before investing your hard-earned money, it is important to research the company, its stock performance, future prospects, sector and industry performance, etc. to judge the fundamental strength and profit potential of the stock to earn good returns, considering the risk factors.