MRG Metals Limited (ASX:MRQ) has consistently affirmed enormous exploration expansion potential at its Corridor Central and Corridor South tenements in Mozambique where it continues to explore at a district scale. A cost effective and technically driven explorer, MRG Metals has been implementing programs to maximise the possibility of discovering globally significant mineral resources and in doing so, has achieved a lot in just over 14 months of exploration.

Continuing its growth trajectory, the Company recently provided an impressive update for new lab assay results from auger drilling on Saia, Viaria and Zulene targets within the Corridor South tenement (6621L). The results confirm the presence of new HMS mineralised zones associated with these three targets at the southern end of 6621L. Moreover, not only do the results confirm visual estimate data, but they also support MRG Metals’ strategy of systematically exploring anomalies as it continues the high success rate for the discovery of high grade HMS zones.

The laboratory results confirm that- 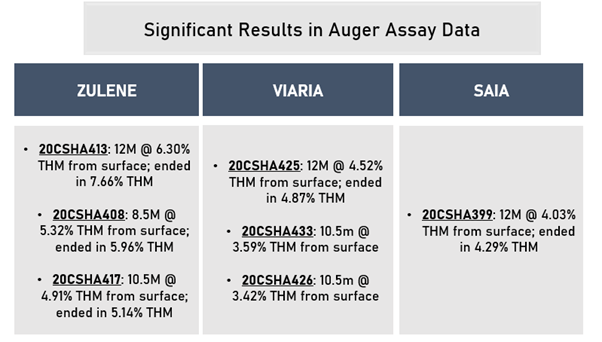 Most significant new HMS mineralised zones associated with the three targets from MRG Metals’ recent report are from Zulene. 4 high grade zones from this target reportedly have the potential of 100mt tonnage at grade and mineralogy. Significantly, this exceeds the foundation resource at Koko Massava. Surface footprint of high grade THM mineralised zones are currently typically 1.5km wide and up to 2km along strike; open in various directions.

Casting an eye on significant holes-

Oversize fraction characteristics of auger sample batch reported have a range from 0.47%–5.33%, with an average of 1.58%. In terms of visual results versus laboratory results for the downhole THM grade averages, the range of absolute variance is 0.47%–2.44% THM- average visual grade was typically over estimated.

Known for its large footprint, Viaria was defined by an aggregate of medium intensity radiometric anomalies. Assay data presented in the results are a portion of auger holes that cover the target.

Casting an eye on the most significant hole-

Comparison of visual results versus lab results for the downhole THM grade averages shows the range of absolute variance to be 0.9%–1.02% THM. The average visual grade was typically over estimated.

Saia is relatively small at 1.5km x 1km but is only 1km south from larger Poiombo. These targets are separated by an erosional drainage feature along the Limpopo River valley scarp. MRG Metals opines that Saia may have been part of Poiombo but has been truncated owing to drainage feature on its north side.

Casting an eye on the most significant hole-

MRG Metals intimated that additional auger drilling was needed to evaluate mineralisation extent and close off higher-grades. Moreover, the drilling could also test any relationship with the Poiombo target to the north.

MRG Metals is planning for aircore drill testing of highest priority targets. Meanwhile, for the three targets discussed, below forms the outlook- 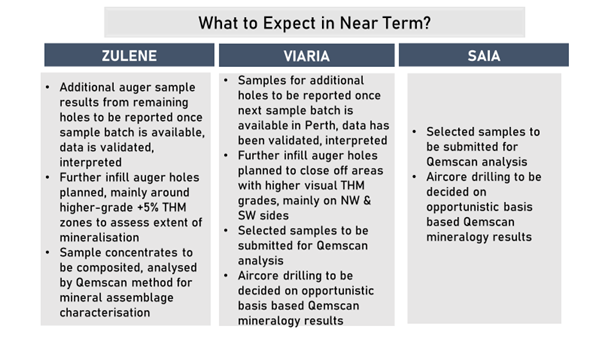