S&P/ASX 200 Materials sector index is among the few indexes that managed to reach their pre-COVID-19 levels. Higher iron ore prices, coupled with the stimulus packages by the government, aided the sector rally in mid-Q2 CY2020. However, recently, the index has seen a downward trend, affected by the prevailing uncertainty in the market. By the end of the trading session on 02 September 2020, the index settled at 14,282.5, up ~2%.

The performance of the sector index has a direct relation to the performance of its constituents. As Nufarm and Adbri are vital players from this industry, announcements, and developments from them are likely to have a substantial impact on the index. Nufarm Limited has updated about its non-cash, impairment charges concerning its European assets while Adbri Limited has announced its 1H FY2020 results. The shares of both the companies surged on the ASX on 2 September.

Let us look at their recent developments in detail.

Nufarm has manufacturing and marketing operations in various parts of the world like Australia, New Zealand, Asia, the Americas, and Europe. It sells products in over 100 nations globally.

On 2 September 2020, Nufarm updated about its non-cash, impairment charges concerning its European assets which it expects to be nearly A$215 million for the year ended 31 July 2020. The Company advised that the non-cash, impairment charges of A$215 million were confirmed post the review of its assets’ carrying value as per appropriate accounting standards. It is subjected to the finalisation of the audit.

The assessment of the carrying value includes the recent operating performance along with a moderated outlook of future earnings based on an anticipation of ongoing margin pressure in the Company’s base product portfolio because of the elevated manufacturing costs plus an improved competition.

Nufarm pointed out that the raw material costs for products in the portfolios Nufarm that was acquired in 2018 is easing. Still, the input costs for a small number of products would likely to be heightened in the medium term and has been reflected in the carrying value assessment.

Based on initial, unaudited accounts, NUF anticipates underlying group EBITDA for FY2020 to lie in between A$290 million and A$300 million. After the sale of the South American businesses, the underlying EBITDA from continuing operations would likely fall in the range A$230 million - A$240 million.

Also, Nufarm expects foreign exchange losses of nearly A$33 million for the full year. Out of these A$33 million, A$9 million are associated with discontinued operations.

Adbri is an ASX 200 listed company and a leading Australian integrated construction materials and lime producing a group of companies.

On 26 August 2020, Adbri Limited announced the appointment of Dr Vanessa Guthrie as Deputy Chair along with the current role as Lead Independent Director.

The Company, on the same date, also announced its 1H FY2020 results for the period ended 30 June 2020. Let us take a quick look at the results.

As a result of uncertainty surrounding COVID-19, Adbri had withdrawn its earnings guidance in April 2020. 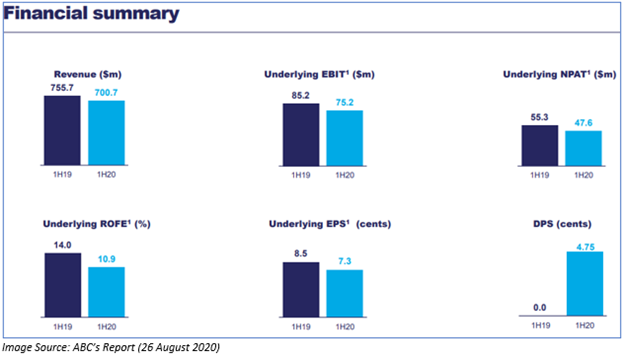