What is an Interim Dividend?

An interim dividend is a percentage of a company's income distributed to shareholders before calculating the company's annual earnings. It is often paid to stockholders of a company's common stock, usually quarterly or semi-annually.

The declaration of the company's interim dividend is in the hands of the Board of Directors, but it is up to shareholders to accept or reject it.

What is a dividend?

A dividend is a payment of a portion of a company's earnings to a class of shareholders decided by the board of directors of the company.

A final dividend is a dividend declared by the firm at its general meeting at the end of the fiscal year, as suggested by the board of directors.

The board of directors declares an interim dividend between two general meetings at which the company receives excess revenue.

What is the distinction between the interim and final dividends?

The firm’s directors declare an interim dividend before determining the firm’s annual profit or loss and holding its annual general meeting (AGM), i.e. at some point between two consecutive AGMs.

The word "final dividend" refers to a dividend declared by a corporation after its financial condition and profitability have been calculated and the company's financial statement for the fiscal year has been presented at its annual general meeting (AGM). It is also called a year-end dividend.

Before the company's reports are finalised, an interim dividend is announced. The final dividend, on the other hand, is declared after the company's financial statements have been prepared.

The interim dividend may be cancelled with the approval of all shareholders, but the final dividend cannot be revoked once it has been declared.

The interim dividend may only be declared if the company's articles of association clearly state so. In the case of the final dividend, however, there is no such condition. 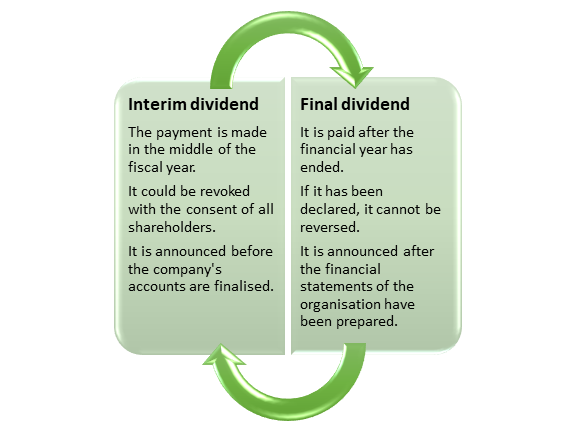 What is the purpose of the interim dividend?

When it comes to stock market investments, many people take one of two approaches: dividend investing or growth investing. Dividend investors are investing in a prosperous and profitable business that has been around for a long time in the hopes of earning a steady income in the form of dividends.

The company's interim financial statements are normally accompanied by this announced dividend. Payments are made in two parts, with the interim dividend being the smaller of the two.

Interim Dividends are paid out of either retained earnings in the profit and loss account or income from the financial year in which the dividend is sought to be declared.

When the corporation has a loss based on financial statements from the previous year, the interim dividend rate should not be higher than the company's average dividend declared for the previous three years. If the dividend is announced, the balance of the proposed dividend must be credited in a separate account within five days of the declaration date.

When is an appropriate time to declare an interim dividend?

So, before announcing an interim dividend, the board of directors must be satisfied that the company's financial status permits payment of such a dividend from its attributable income. When the organisation has made substantial profits for a portion of the year and has optimistic future goals for the rest of the year, an interim dividend can be declared.

Should you explore Nike (NKE) after its first-quarter earnings?

Why are Hallenstein Glasson’s (NZX: HLG) shares moving up today?