In response to the COVID-19 pandemic, First Au remained committed to adhering to government restrictions and ensured the safety of the employees, contractors, and the local communities. The planned drilling program at the flagship Gimlet gold project was delayed until First Au could assess the conditions and secure drilling contractors. The drilling program is all set to commence in August.

Acquisition of VicGold, First Au to explore one of the largest projects in Victoria Eastern Goldfields 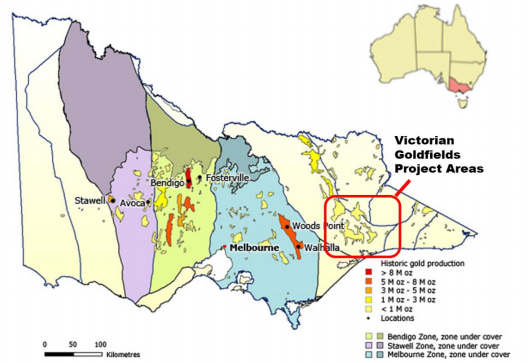 Historical mining operations dates back to 1880’s as per the records from Victorian Government with mining grades in excess of 1 ounce per tonne. The historical Exhibition Mine recorded production with gold grades of ~5 ounce per tonne.

The acquisition would include an initial allotment of 10 million ordinary shares of First Au and further cash and equity payments upon achievement of specific milestones. Further, the due diligence was also successfully completed.

To read on the structure of the VicGold Transaction, Read: First Au paves path for VicGold acquisition, Due diligence investigations completed

Share Purchase Plan & Placement Completed: On 11 June 2020, a Share placement program was completed which was soon followed by the completion of the Share Purchase Plan (SPP) on 15 July 2020. Together a sum of $1,207,000 was raised, which also successfully completed one of the criteria for the VicGold acquisition.

On 9 July 2020, First Au announced entering into an option agreement to acquire 85% stake (post dilution 80%) in the granted exploration licenses EL 5505 and the prospecting license application PL 007319 also known as the Snowstorm Project in East Gippsland of Victoria.

The Snowstorm project is only 15 kms north of the VicGold Haunted Stream Project and hosts similar geological gold targets as the Haunted Stream.

Diamond Drilling program to commence in August at Gimlet

First Au owns the flagship Gimlet gold project in the vicinity of Kalgoorlie goldfields in Western Australia. As a result of the extensive drilling program held during 2018 and 2019, First Au holds 69,000 Ounce of Inferred gold resource at Gimlet.

First Au has entered an option agreement to acquire the White flag tenement (EL24/215), 4 kilometres WNW of the Gimlet project. First Au’s holding in the region is within the trucking range to the existing gold processing plants in the Kalgoorlie region with several contenders for the toll treatment of ores.

During the June quarter, First Au conducted an induced polarization (IP) and resistivity survey at Gimlet and prospective surrounding areas including the Horan’s Dam Prospect. The objective of the IP survey was to identify new prospective targets along and around the strike to Gimlet. 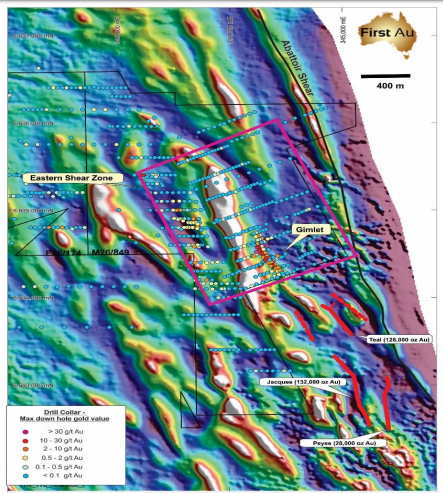 The IP survey is planned to be integrated to a new mineralisation study of the Gimlet gold project by First Au’s geological consultant Ian Neilson, who holds extensive exposure to conducting mineralisation studies within the Kalgoorlie region. The results will yield a series of new drilling targets over the upcoming 12 months.

The first phase includes a diamond drilling program which is scheduled to commence in August to further test the plunge to the identified mineralisation envelope and the to test the core samples for alterations and structural mapping. While no field works have been conducted at East Pilbara projects including Talga and the Tambina gold and base metals project during the June quarter.