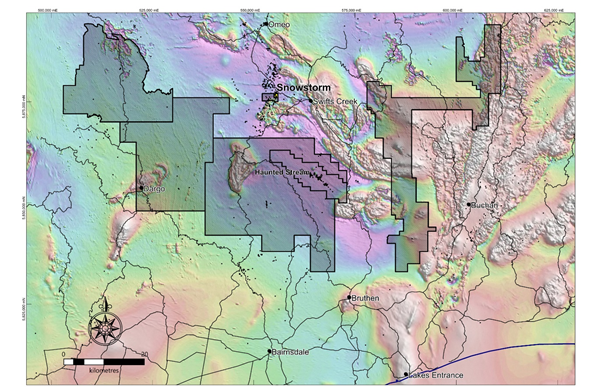 Recently First Au announced plans to acquire 80% stake in the VicGold Pty Ltd which owns the Victorian Gold Project. The license tenement and application tenures are located in close vicinity of the Victoria Gold project and mark the expansion of the existing project area. The Snowstorm project is around 15 kilometres north of the VicGold’s Haunted Stream prospect.

Snowstorm holds Ordovician sedimentary formations, with sulphide lodes and free gold. The mineralisation is structurally controlled with numerous potential walk-up drilling targets which would be identified once the mapping is completed.

Multiple mafic dykes have also been observed in the area which prominently occurs immediately adjacent to the mineralised quartz reefs.

The prospective areas identified until now includes a series of fault hosted lodes sub-parallel to bedding trending along NW-SE. First Au recognised an array of cross-structures, similar to Haunted Stream, further enhancing the gold mineralisation potential in the region.

Another striking similarity between Haunted Stream and Snowstorm, is the fact that Snowstorm can be considered a fecund ground for auriferous deposits with similar mineralisation controls as observed at Haunted Stream.

The First Au management is excited to pursue the prospective opportunities and has shown confidence in the VicGold project and the region to hold substantial high-grade gold mineralisation.

Outline of the Option Agreement

First Au reserves right to extend the option period by another 12 months via a payment of $40,000. First Au would be required to spend a total of at least $50,000 towards exploration during each of the initial and following 12 months terms.

In a scenario when the FAU chooses to extend the tenure of the option agreement by 12 months, an additional exploration expenditure of $50,000 must be spent on the exploration activities.

Upon completion of the agreement, a 5% equity will be transferred to Ian Neilson or nominees in lieu of the work undertaken by him on securing the Snowstorm project for First Au and the geological work to provide the technical information for the company. Following the transfer, the First Au equity would stand at 80% in the project.

The underlying conditions for the agreement include completion of due diligence within 30 days of signing the agreement, renewal of EL 5505 for at least 3 years and granting of PL 007319 license application.

A payment of $250,000 amount would be required to be paid to the vendors in cash, shares or combination of both on exercising of option by First Au. In case of payment via shares, the share price to be used would be the 30-day VWAP at the time. The shares in the project may be held by the vendors and Ian Nelson until an investment decision for the development of the project is made. Upon such a decision, First Au reserves rights to acquire the additional 20% at fair market value.