When the whole world is struggling with a global sand crisis, VRX Silica Limited (ASX: VRX), formerly termed as Ventnor Resources Limited, is working towards fulfilling the looming shortage of this key resource. The broad market for silica sand in the Asia-Pacific region offers a vast opportunity for the company to address the increasing demand for the product.

The company owns significant projects for silica sand exploration in Western Australia, which includes three projects prospective for silica sand namely Arrowsmith, Muchea and Boyatup; and two more projects prospective for other minerals â Warrawanda and Biranup Project. Out of these five projects, Arrowsmith and the Muchea Projects are the companyâs key projects where JORC compliant Mineral Resource Estimate have been determined.

VRX Silica has recently reported a new Mineral Resource Estimate (MRE) at its Arrowsmith North Silica Sand Project and Muchea Project, post the completion of an aircore drill program at the project sites. The table below highlights the upgraded MREs (JORC 2012 compliant) at its key projects:

According to the company, the silica sand JORC compliant Mineral Resources identified at its key projects are noteworthy and are anticipated to increase further. Also, VRX Silica has the ability to generate huge quantities of silica sand from each of these projects to meet the enormous demand for the product. Currently, the company is engaged in the completion of the Environmental Approval process and the procedure of Mining Lease Applications at both the Arrowsmith and Muchea Projects. 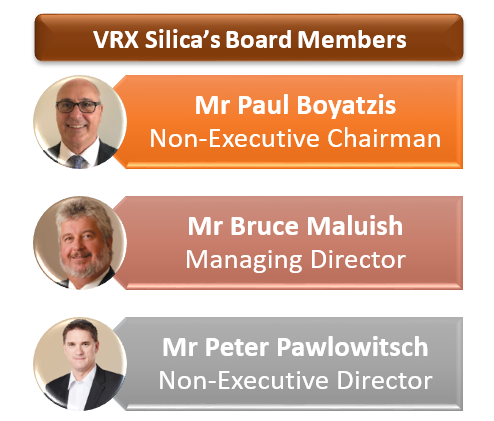 Mr Paul Boyatzis, the current Non-Executive Chairman of VRX Silica, holds over 30 years of experience in the investment and equity markets with an extensive working knowledge of public companies. Currently, he is a member of the Securities and Derivative Industry Association, the Australian Institute of Company Directors and the Certified Practising Accountants of Australia.

Mr Boyatzis has helped many emerging companies in raising investment capital both domestically and via overseas institutional investors. He has been serving as the VRX Silica Director since 24th September 2010.

Besides VRX Silica, he has held the directorships at the following listed companies:

VRX Silicaâs Managing Director, Mr Bruce Maluish holds directorship of the company since 24th September 2010. During his 30+ years of experience in the mining industry, Mr Maluish had occupied the positions of Managing Director and General Manager in different companies including Forsyth Mining, Matilda Minerals, Hill 50, Monarch Group of Companies and Abelle. He is also on the board of Nexus Minerals Ltd since 1st July 2015.

He also possesses credentials in Project Planning, Surveying, Mining, and Finance. He has worked in multiple resource sectors including mineral sands, gold and nickel from both underground and open pits.

VRX Silicaâs Non-Executive Director, Mr Peter Pawlowitsch, holds over ten years of experience in the accounting profession with a recent experience in the evaluation of businesses and mining projects, and business management.

Mr Pawlowitsch, the director of VRX Silica since 12th February 2010, is a well-qualified board member who holds a B. Com degree from the University of Western Australia and an MBA degree from Curtin University. Currently, he is also a member of the Certified Practising Accountants of Australia and is a Fellow of Governance Institute of Australia.

Besides VRX Silica, he has held the directorships at the following listed companies:

It can be seen that VRX Silicaâs board members have considerable experience in mine development into production and mineral exploration areas, and in the management of publicly listed exploration and mining companies. The companyâs efficient management team has been a significant contributory factor in its speedy progress.

Stock Performance: On 7th August 2019, VRX stock settled the dayâs trade higher at AUD 0.130 with a rise of 8.33 per cent relative to the last closed price. The stock has generated a return of 93.55 per cent over last one year.