As the world is running out of the sand resource, an Australian exploration company, VRX Silica Limited (ASX: VRX), previously Ventnor Resources Limited, is working towards meeting the global demand for silica sand. The company is trying to meet the shortage through its remarkable silica sand projects in Western Australia. The two key projects of the company that are prospective for silica sand resource are Arrowsmith Project and Muchea Project.

In an announcement on the Australian Stock Exchange today, the company released the results of a drill program accomplished at the Arrowsmith North Silica Sand Project. The project is situated at 270km to the north of Perth in Western Australia.

As per the results, there has been an upgrade in the Mineral Resource Estimate (MRE) for the Arrowsmith North Project to an outstanding 771 Mt @ 98.0% SiO2. The upgraded MRE includes an Inferred Resource estimate of 523 Mt @ 98.2% SiO2 and an Indicated Resource estimate of 248 Mt @ 97.7% SiO2. The Mineral Resources reported by the company are in accordance with the JORC Code 2012.

Recently, the company also released the results of an aircore drill program accomplished at its Muchea Project. As per the results, the MRE for the Muchea Silica Sand Project has been upgraded to 208 Mt @ 99.6% SiO2 from the initial estimate of 191 Mt @ 99.6% SiO2.

Insight into MRE Results: In October 2018, the results from the Mineral Resource Estimate results of the Arrowsmith North prospect were announced by the company. The MRE for the Arrowsmith North Deposit was reported in line with the JORC Code 2012 at 193.6 Mt @ 98% SiO2. The estimate was based on the results collected from 62 hand auger drill holes drilled for 235.6 metres. Two silica sand types – yellow and white sand – were also defined in the drilling results that differ with respect to the particle size distribution and their chemistry.

The table below shows the initial MRE results for Arrowsmith North Project:

An overall MRE increase of 398 per cent from Inferred MRE of 193.6 Mt @ 98% SiO2 to 771 Mt @ 98.0% SiO2 has been reported by the company. The below table demonstrates the comparison of the maiden and the updated MRE results: 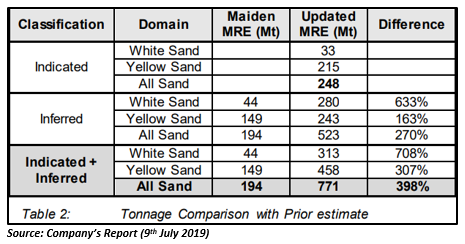 Additional Details on Upgraded MRE: VRX Silica notified about the commencement of drilling at three of its project areas at Arrowsmith North and Central Silica Sand Projects, and its Muchea Silica Sand Project in March this year. The drilling work was undertaken under a planned aircore drilling program that was conducted to extend and upgrade the current dataset used to estimate the VRX Silica’s Silica Sand Resources.

VRX Silica cited in today’s announcement that the Indicated Mineral Resource is primarily within the 100% owned granted tenements E70/5109 and E70/5027, majority of which is anticipated to convert to Probable Reserves.

The company stated that there is no need for further drilling before the commencement of mining operations. However, it will execute a further testwork program on the white sand.

The metallurgical testwork completed to-date validates that the updated silica sand model of the company is readily compliant to an upgrade by conventional washing and screening methods. Also, the updated model could generate a high-purity silica sand product with high mass recoveries. The industries like foundry, glass making, ceramics industries are expected to benefit from these high-purity silica sand product specifications.

Future work: According to the Managing Director of VRX Silica, Bruce Maluish, the higher-grade feed stock would assist in the production of a high-grade final product, meeting the demand of foundry and glassmaking industries.

Mr Maluish believes that the MRE will now allow VRX Silica to finalise the estimates of Ore Reserves which will help in the approaching bankable feasibility studies (BFS). A positive feasibility study will pave path to obtaining mining approvals, financing and finally into commencement of mining operations. The company further intends to undertake testwork program on the unpredicted 313 mt of white sand at Arrowsmith to evaluate quality of products.

Strong Interest Received for Potential Offtake of Silica Sand: The company received strong interest for the purchase of huge tonnages of silica sand products from the Arrowsmith North Project and its two other project areas. VRX Silica obtained enquiries and expressions of interest from twenty manufacturers across the Asia-Pacific region. The organisations in the glassmaking and the foundry industry across the Asia-Pacific region have expressed interest in the company’s silica sand products.

From glassmaking industry, highest demand was received from Chinese industry, which is the most dominant in the Asia-Pacific region with over 270 glass making facilities. From foundry industry, the highest level of demand has been from South Korea, world’s largest foundry market particularly in the automobile and ship building industries.

The company will be able to undertake binding offtake agreements post obtaining the Mining Permits at its silica sand projects.

Stock Performance: VRX settled the day’s trade at AUD 0.115 on the ASX up by 21.05 per cent on 9th July 2019 relative to the last closed price. Around 3.6 million number of company’s shares traded today, compared to annual average volume of 804,6k (As per ASX). The stock has delivered a return of 37.68 per cent and 13.10 per cent in the last three months and one month, respectively. The performance of the stock in the last five years has been exceptionally well, generating a return of 80.62 per cent.